A Memorial for the SAIC MFA Candidate

On February 3, painter Jeff Geesa passed away, leaving an artistic practice as wonderfully developed as it was sadly unfinished. The second year MFA student at the School of the Art Institute of Chicago (SAIC) “had so much work he wanted to develop, so much he didn’t get to see through,” said friend and fellow MFA in Painting and Drawing student Keith Tolch. Primarily a painter, Geesa rooted his work in the kind of playfulness and exploration that was essential to Dada. Many of his works find the fantastical ground, similar to some of the most satisfying literature, where viewers are made to think and laugh at once. “I loved all of Jeff’s work, but I was probably most fond of his language works for their wit and discovery of new ways of seeing and reading,” said Kay Rosen, who taught Geesa in the Painting and Drawing department at SAIC.

The artist’s obsession with language is obvious in his work. If one word could describe it, Tolch said, it would be “humor.” “He was deadpan like so many of us, but sharper and wittier than the rest. That’s why he was wonderful company. Somehow these qualities flourished in a man who was also one of the most loyal and transparent friends I’ve ever had.” Fellow MFA student, painter Kevin Stuart, spoke at Geesa’s February 16 memorial at SAIC, remarking on what he saw as one of Geesa’s most enduring qualities. “He always knew what he was living for.”

Others who made comments at the memorial, which was attended by Geesa’s friends and family as well as colleagues and SAIC faculty and staff, put to words what is evident in much of the painter’s work, which cleaves perspicaciously to the conceptual. During their time spent together, Stuart and Geesa “did some time in the pun-itentiary,” said Stuart. An accomplished drummer and guitarist, Geesa loved to play with music, as well. A former bandmate remembered the artist’s sludge metal (a form of heavy metal played slowly) song played at “1bpy (one beat per year),” for which the band gathered several times annually to play a single note.

Not content as a painter to “finesse only the conceptual aspects of his paintings,” said Rosen, Geesa was also very intentional with material application. “Techniques, materials, and craft were extremely important to him and as much a part of the content of his work as the subjects of his paintings were.” A deeply studious art historian, as well, Geesa constantly analyzed what made works of art successful, Rosen said, and why they appealed to him. His explorations of materials and techniques, as well as language, music, writing, and humor, “combined them seamlessly.”

Geesa’s father told those gathered at his son’s memorial that his family did not really know what the artist was working on the school or what his life there was like. But he knew that his son had come to Chicago “with nothing. He was drifting. Until he came to this wonderful place.” Perhaps art and a community based on it provided Geesa with a sort of rescue from a less purposeful life, or simply one of not making art. His father said that he learned more about his son’s time in Chicago after Jeff’s death, “from you all,” than he did from his son himself. Geesa’s air was one of self-effacement, similar maybe to the way his work trades on the shrewd economy of understatement.

Talented and passionate an artist as he was, Geesa’s focus was as much on his work as it was on the academic and interpersonal life of graduate school, noted Rosen. “He set himself up for so many challenges and then met them honestly, tirelessly, and with the highest standards.” And friends of Geesa are committed to continuing his legacy through his art. Tolch looks forward to seeing his friend’s work in the Spring MFA show at SAIC, for which Rosen hopes a neon piece he was planning will be fabricated, as well as in a group show at the Carl Gallery in Pilsen, also in spring. The most lasting tribute to the artist’s life may be in what one friend of Geesa’s encouraged artists who knew him to do in the wake of his death: “Keep on making.” 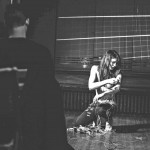 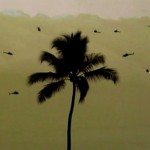