Between Cheeto-fueled reinterpretations of The Bachelor and lots of dance hits, Kelly Anderson’s Message Me If… made us smile. 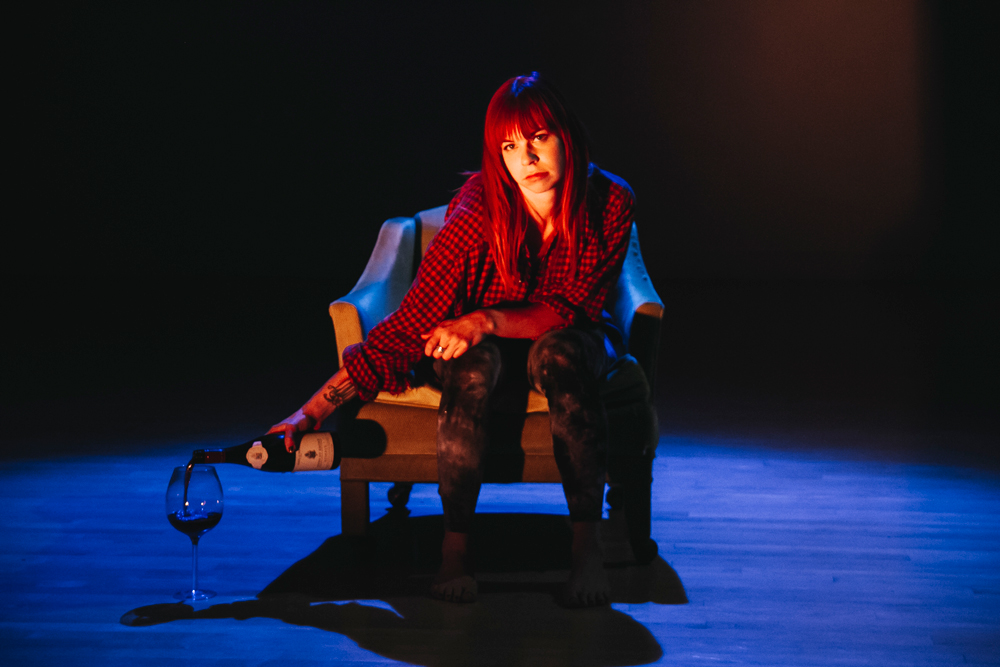 If I were to say “contemporary dance,” what comes to mind?

You’re probably envisioning people moving awkwardly to some even more awkward experimental music. Nebulous narratives that make you question if those dancers are rolling on the floor because they are trying to show that they are either happy or dying.

But, contemporary dance can be humorous and perfectly understandable. Message Me If… The Journey of a Modern Day Bachelorette by the Kelly Anderson Dance Theatre made this clear to all who came to their performances at Links Hall in Chicago from November 14-16.

Message Me If… opens up with a projection of on-the-street interviews in which several young women retell their worst dating experiences. Their stories are a hilarious range of failed amorous encounters, from accounts of boys collecting one interviewee’s personal objects each time they hooked up, to a creep shoving his tongue down a young woman’s throat on their first date. As the video plays, female dancers, all wearing delicate white nightgowns, roll in and out of delicate dance poses. Marian Anderson’s “My Lord, What a Morning” plays as they move slowly, alternating unisons and individual segments. They come to a standstill, and suddenly, an exciting disco tune kicks in. Each dancer strikes a vogue pose with a sassy glance to the audience. They start jumping around, shed their nightgowns for colorful party dresses, and shake their bodies to Kool and the Gang’s “Ladies Night.” The choreography they perform is the same as they did in their nightgowns, yet the pace is quicker and the movements sharper. Dynamics and intention change everything. 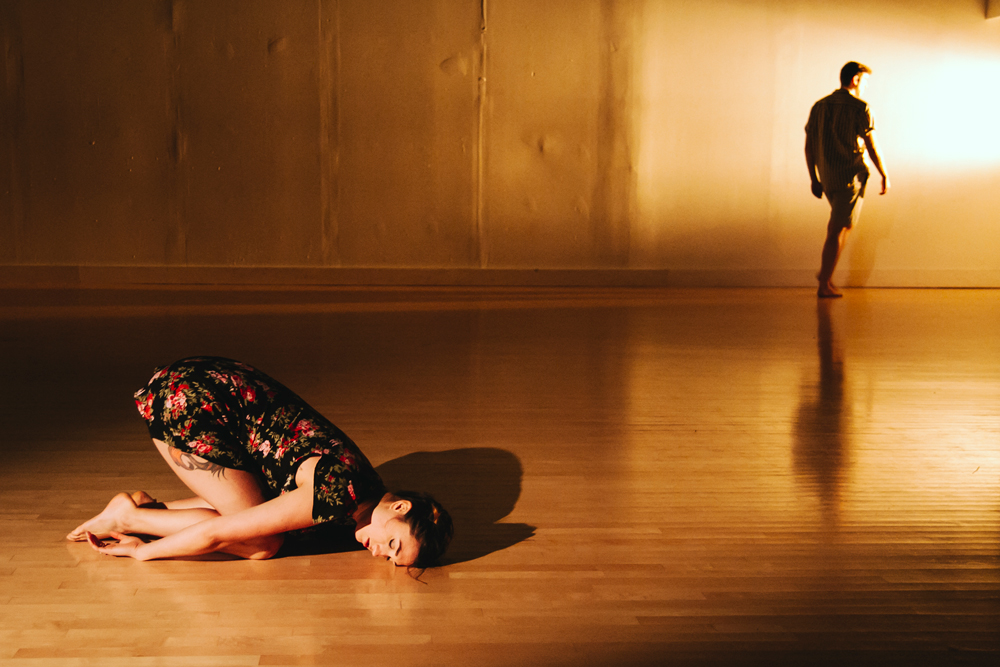 The girls’ party time is over and they are quickly succeeded by an armchair that enters from the upstage left corner, its back facing to the audience. Two small feet peek out from behind the armchair, pushing it gradually towards the audience in what seems to be a most desperate and dispirited effort. Each time the armchair pauses its progression, the audience giggles. Dancer Amanda Timm finally turns her seat around to face the audience. Her character is clearly tipsy, or at least drunk on desperation. Ricky Nelson’s “Lonesome Town” plays as she watches an invisible TV and pours herself a 25-ounce glass of wine. After choreography translating into what probably at least 85% of the audience has experienced in the past as “that shit Saturday night when I am alone while everyone is out mingling,” she is kicked off her chair by Kelly Anderson, who takes on the stage.

As a voiceover by Anderson reads aloud what seems to be her talking to herself as she is filling out an online dating profile, she starts changing out of the clothes she entered with and into sportswear — “I love baseball” says her voice over. But as the voice keeps on enumerating her hobbies, she piles on legwarmers, and… a wig. “I love to dress up as Richard Simmons to lipsynch to Whitney Houston.” As Anderson performs her favorite hobby the crowd is cracking up. At this point, as an audience member, I don’t care if my laughter has reached an inappropriate loudness; this is just beautifully priceless. 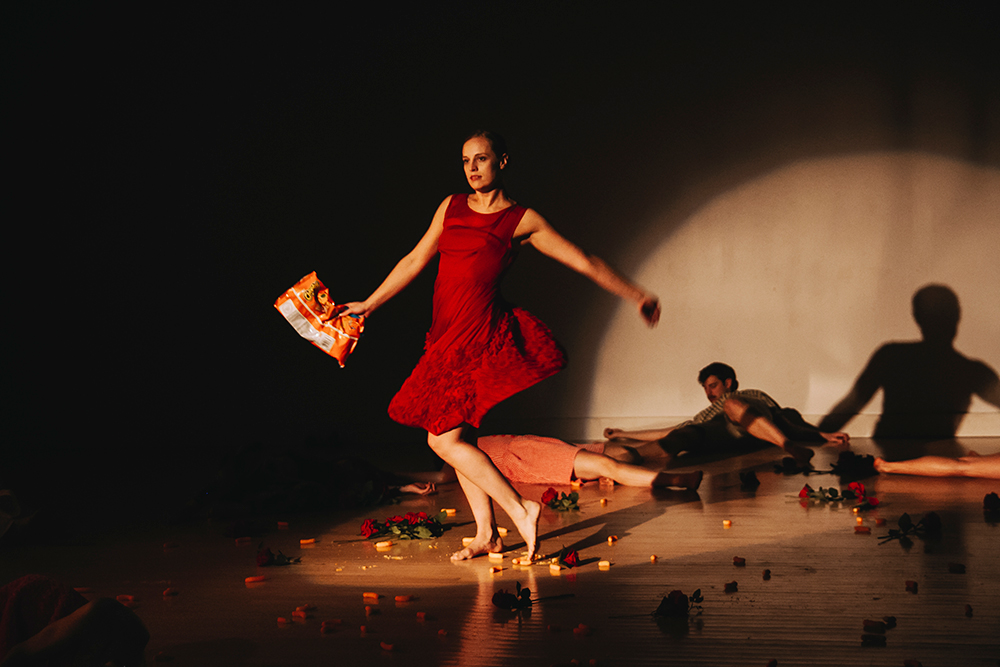 I had never really experienced humor and dance together until I saw Lucky Plush Productions at the Chicago Dancemakers Forum show at the MCA in 2013. And no surprise, Melinda Jean Myers, the guest choreographer for Message Me If…, has danced with Lucky Plush before. The hilarious scenes and deliciously cheesy music choices keep waterfalling throughout the show. Dancers Ginny Cook and Michael O’Neill perform a quirky and charming duet to Foreigner’s “I Want to Know What Love Is.” Anderson mentions the time that she auditioned for The Bachelor (and then thanks them for not choosing her). She offers a hilarious dance interpretation of the show complete with four female pretendants and dancer Jose Luis as Juan Pablo, The Bachelor.

Anderson does a wonderful job with using her dancers’ personalities to create endearing characters and distinctive movement. This show is completely bonkers – and that’s why it is so delightful to watch. The closing number is Anderson dancing to Lisa Ekdahl and Peter Nordahl Trio’s “But Not For Me” — an absolute favorite of mine. She swirls around dead bodies (who knew The Bachelor could end so tragically?) while munching from an extra-large bag of Cheetos, inadvertently dropping her grub on the inert bodies around her.

As I walked out of the show, I flipped through the program and read everyone’s bios. Kelly Anderson arrived in Chicago in 2012, and we hope she stays for a while.

Arts & Culture Who Knew Contemporary Dance Could Be So Funny?
« Previous Story 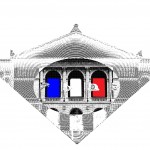 France and Chicago Meet at EXPO 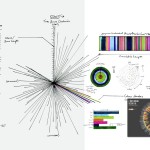