Institutionally-Sanctioned Catharsis for the Masses

This month, Simon Anderson’s Elements of ‘Pataphysics class invited the SAIC community to participate in Piano Activities, a Fluxus performance. 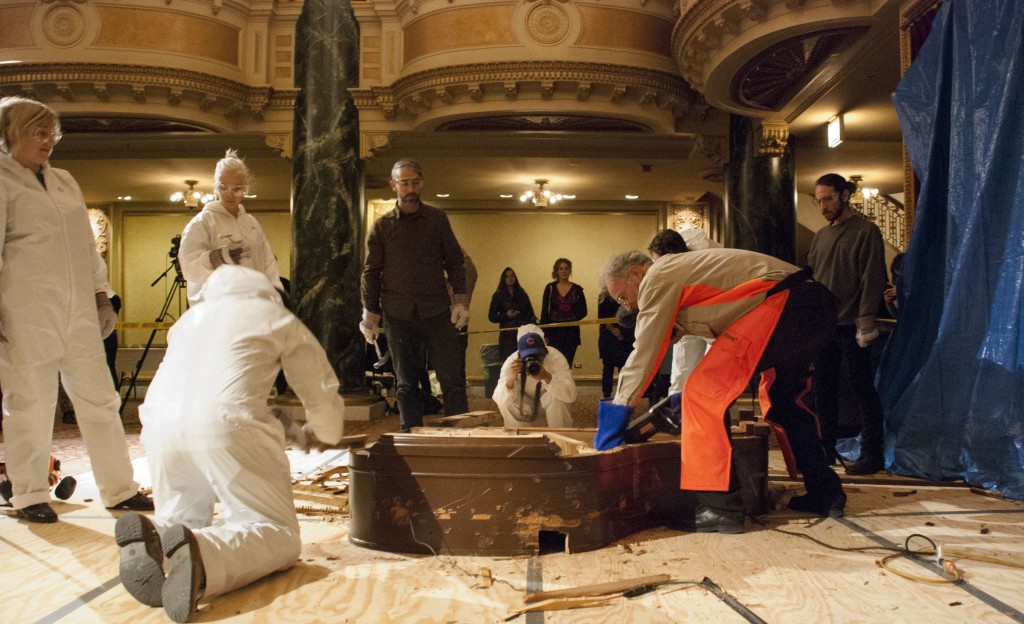 On November 13, the School of the Art Institute of Chicago (SAIC) community gathered in the MacLean Ballroom to witness a performance of both destruction and renewal. Led by Simon Anderson, Associate Professor of Art History, Theory, and Criticism at SAIC, his Elements of ‘Pataphysics class performed musician Philip Corner’s notorious Piano Activities, a score that calls for the utter obliteration of a piano. Anderson poetically introduced the performance and welcomed the crowd to partake and “enjoy some catharsis.” Guests obliged and unleashed some end-of-semester tension while wearing protective goggles (and after signing a waiver, of course).

Corner’s piece calls for “players” to rub, tap, pluck, scratch, and strike the instrument until all that remains is a heap of once-beautiful, unplayable remnants. They employ these actions on keys, strings, the underside and exterior of the piano, inventing a new way of making music while concurrently working toward termination of any future compositions. Unavoidable due to these prescribed methods, duration is employed, like any concert. Corner wrote of a morality behind the destruction of the instrument, declaring it not simply an act of violence. He required the piano be “passed through its full and useful life,” and, rather than merely being disposed of, was first worthy of celebration. In this case, the piano was donated by the school’s Liberal Arts department; its cracked soundboard preventing proper use. A new value could nonetheless be realized through a ceremony of deliberate aggression.

Piano Activities premiered in 1962 in Wiesbaden, Germany and included artists Dick Higgins, Alison Knowles, George Maciunas and Emmett Williams, who engaged in the demolition at the first of the many touring festivals of Fluxus performances organized by Maciunas. Participants methodically mused on the history of their object, and enacted Corner’s vision utilizing the limits set forth by George Brecht’s event score model. 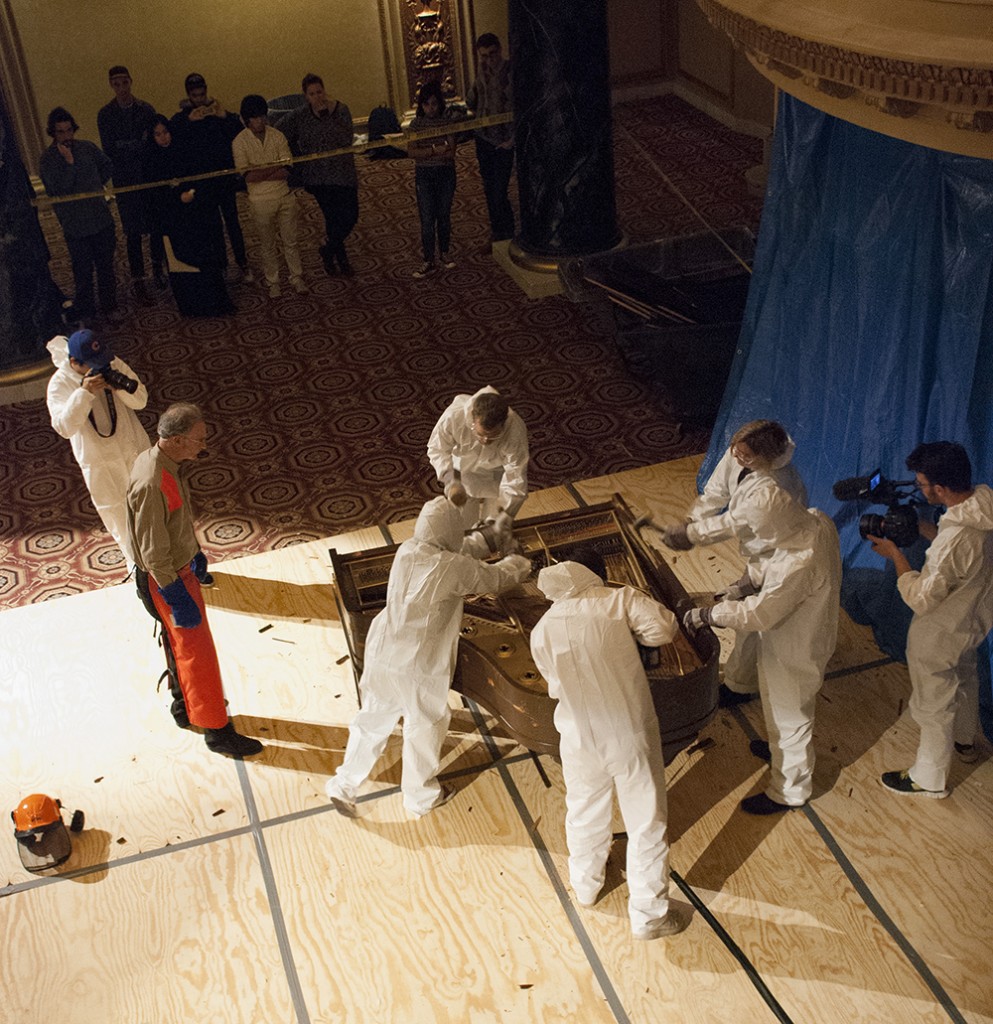 The succinct and loose parameters allow for a variety of possible outcomes, as seen with each individual’s approach in Piano Activities. Many Fluxus scores rely on the prospects associated with music; some employ tactics like Corner’s, while others present a more tender style. An example of this latter, dissimilar method is demonstrated with Brecht’s Solo for Violin, Viola, Cello, or Contrabass, in which the artist carefully and quietly polishes his instrument.

Anderson’s class prepared for the performance through research, selecting tools, and getting fitted for white hazmat jumpsuits. While the thin garments certainly would not offer much protection from debris or flailing utensils, the students slipped them on in order to adhere to SAIC’s institutional safety rules. Another directive was that only Anderson could employ power tools. The weaponry – drills, hammers, sanders, and saws of all kinds – were supplied by the school’s Columbus Wood Shop.

Keeping with Corner’s intentions, Anderson’s students remained serious and focused on the task before them. Even while waiting on the sidelines, they followed the composer’s request that players show both restraint and extremity during active and inactive moments. “We knew that we should meditate, as Corner suggests, on the job of the music,” remarked Visual and Critical Studies student Meg Santisi. “Pick a task and conclude it. In a pataphysical way, the measurable is immeasurable, and our task was a science of contradiction: destroy and create.”

This is commendable, as the absurdity behind theories of ‘pataphysics could likely prevent such behavior. The French novelist and playwright Alfred Jarry invented the science of imaginary solutions and laws governing exceptions in the late 19th century. As a parody of modern science that utilizes methods such as nonsensical language and humor, ‘pataphysics is about finding intelligence within the absurd. Impossible to pin down with any real definition, it relates to Marcel Duchamp’s idea of infra-thin, the imperceptible existence of objects in various states simultaneously. The Dadaists, Surrealists, philosophers Gilles Deleuze and Jean Baudrillard, and Guy Debord and the Situationists all embraced pataphysical ideas. 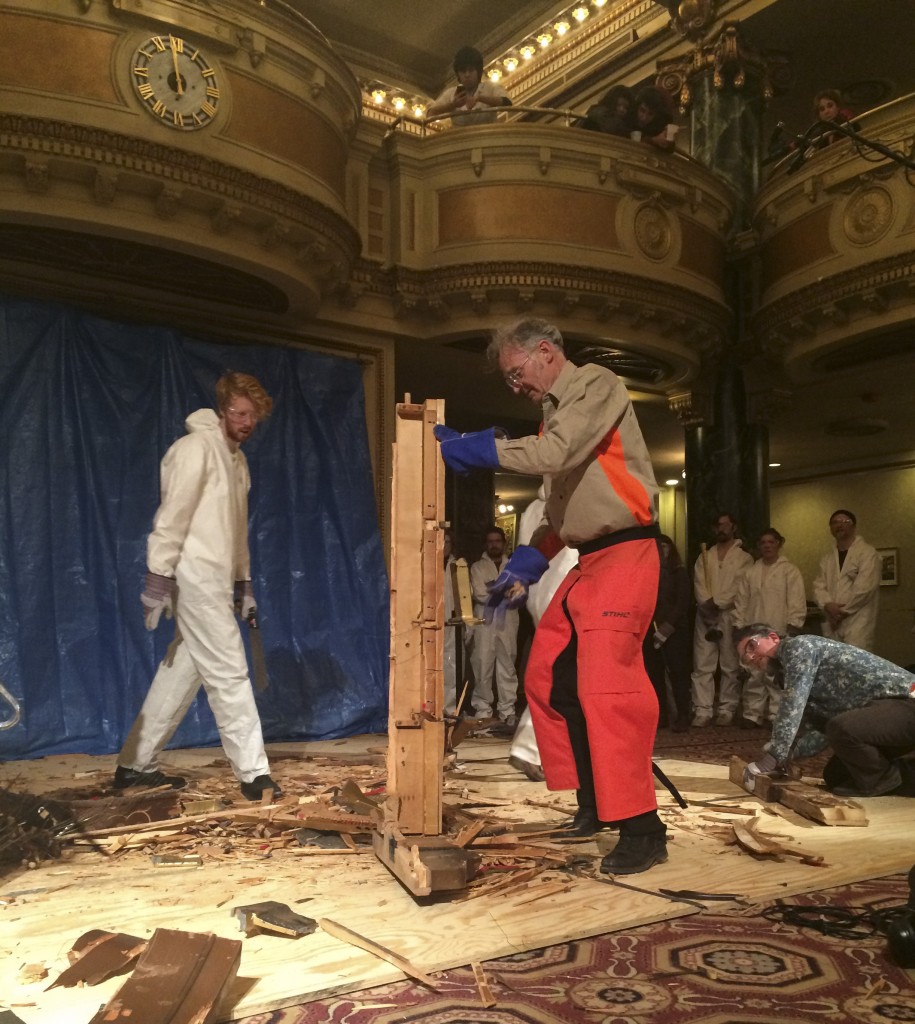 In waves of four at a time, members of each group struck the piano with their selected tool. The demolition was anticipated to take around three hours, but much to everyone’s surprise, it concluded in just a little over 60 minutes with Anderson’s determination that there wasn’t much left to bludgeon. At that point those remaining visited the platform to collect a memento or two from the wreckage. Two girls struggled to drag legs from the extinguished object down the stairs, but eventually left them for someone more determined. 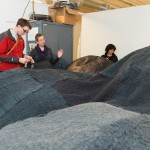 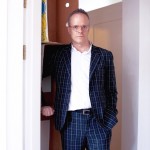