This year’s INST-INT art and technology conference in Minneapolis brought a number of opportunities that contributed to the ongoing building of a sharing-based community of makers and thinkers.

“I’m going to open up my heart, bleed all over and tell you things I’ve never told anyone else,” said artist Dan Goods at the INST-INT art and technology conference in Minneapolis in September.

Honesty was the thread in many of the talks at the conference. Discouraged from giving portfolio presentations, artists and designers stood on stage and discussed their processes with no filter for issues they face such as budgets, time constraints and learning curves.

Goods, NASA’s visual strategist for 11 years, showed slides depicting alternative paths to success, like failing to take the SATs (“I don’t know how to do a lot of things”) and still eventually having a successful career. Today Goods leads a team that visualizes outer-space phenomena in NASA’s Jet Propulsion Lab.

It’s easy to give a lecture about failure from a standpoint of success, but speakers practice what they preach outside of INST-INT as part of the open-source community. 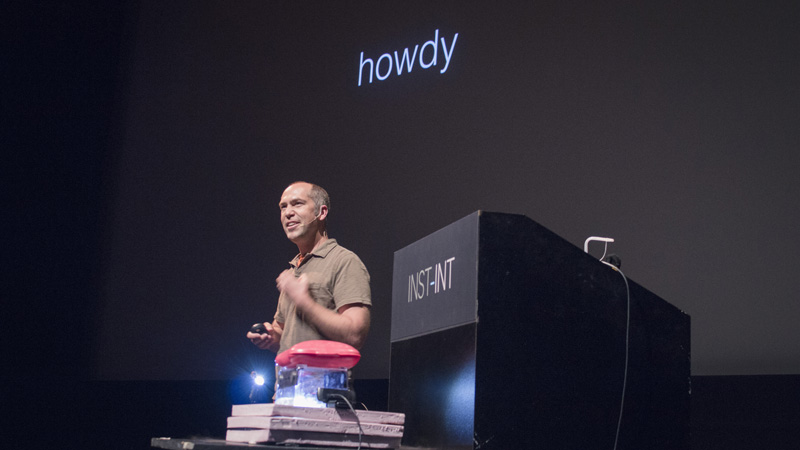 Dan Goods talks about the key to success. Photo courtesy of Sam Thompson.

“My main objective for coming to INST-INT … is inspiration. There are so many ideas these people have for the projects they’ve done that I never hear about outside of this,” said Anthony Pleshek, an audience member who also attended INST-INT last year.

“[People at INST-INT] are getting tools and inspiration out of this, because people see something they’re excited about, then make something about it and then go back home and share it with people, and those people see the product of that inspiration,” said Kyle McDonald, an artist who has spoken at both INST-INT and its sister conference, Eyeo, which covers a broader spectrum of topics for programmers, designers and artists.

McDonald has a background in both computer engineering and art. He has found success in numerous interactive projects, which he attributes to the open-source approach. “If I try to group my projects into one thing, the only idea that’s consistent is sharing.”

McDonald’s engineer-turned-artist story is not uncommon at INST-INT. Many of the speakers come from backgrounds that intertwine engineering and art. “There are so many in-between spaces you find in life nowadays,” said Micah Scott during her presentation. She invented the FadeCandy Controller, a device for LED programming, which stems from her work using LEDs to make complex patterns. Scott began building circuits for amateur LED projects in her basement. Over time, she developed an expertise that allowed her to create things like the FadeCandy Controller, which anyone can buy for $25.00. 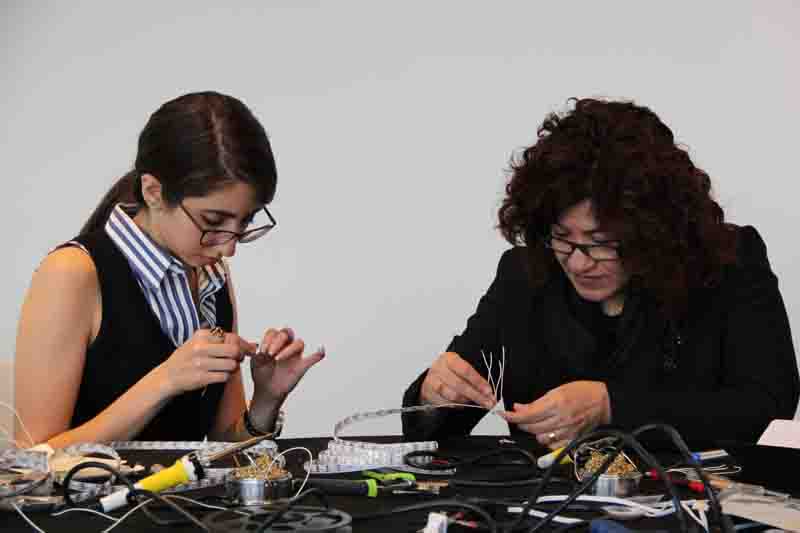 Jen Lewin spoke from a design-oriented perspective. She runs a collaborative studio that emphasizes “hands-on” approaches and shies away from coming up with ideas and outsourcing the work to realize them. Her interdisciplinary background allows her to create complex projects like laser harps and works that can exist and function outdoors.

“The most important thing is this: they’re connecting with each other,” Lewin said of the audience’s experience with her interactive works. Her concerns for the viewer mirror McDonald’s wishes for the open-source community member, as well.

But the question arises as to the validity of claiming to be part of open source, which is enjoying a bit of a moment right now, and actually practicing it. “You can kind of stand on the periphery and use it, but once you get into it, you have to constantly innovate because innovation is the only thing that sets you apart. You have to give up your ego a little bit, and you have to work pretty quickly to keep up with other people,” McDonald said.

Although “open source” brings about notions of purely digital sharing, the physical community can be just as crucial to its existence. Events like INST-INT provide hubs for artists and designers to meet and exchange ideas, but once guests fly back home to their everyday lives, maintaining that sense of community can become a challenge. “The important thing is finding people near you who want to hang out, and just making a point of getting excited about stuff and supporting each other. I think in even in the smallest communities you can still have a chance to do that,” said McDonald.

The question is also how to spread the ideas and benefits of open source to those outside of it, which is where interactive art finds importance. Open-source contributes to both the creation and the aftermath. We can see it taking effect: exposure and honesty transcend the media used for interactive art.

During the conference, designer Yael Braha’s talk emphasized a playful approach in works like Animal Race, which let people in a mall race animal projections down a small track. “Kids really loved it. That’s a payoff for me,” she said. Many of the works discussed at the conference moved it away from an academic, conceptual approach to art-making and toward processes with more surface-level intentions. Many presenters were happy to admit that, as it permits audiences to experience works in a more playful manner.

But playfulness and curiosity in interactive art is not just a product of its creation. For an audience to truly engage with the work, artists must hold the same sense of vibrant curiosity and interest in play. INST-INT calls itself an interactive art and technology conference; the biggest takeaway from it is the community of people unafraid to learn or try new things. Speakers mentioned that a previous talk at the conference, often by someone with a very different practice, reminded them of their own experiences, to shared values in the meaning of making.

There as many benefits of open source as there are open-source community members. Joel Lewis focused on the “open studio versus closed start-up” in his presentation, which dealt with his roles in different design companies. “The reason I love open source so much,” he said, “is that it enables me to steal with a clear conscience.”

For the complete interview with Kyle McDonald, check out F News’ coverage here. 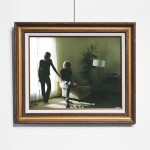 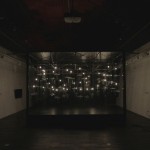