The very first things that students in visual communication learn are that layout is the most fundamental aspect of design, and that practicing how to create and utilize a grid is essential in order to communicate language and ideas. Eventually, they also learn that as they grow as students and transition into professionals, they must break that very grid in order to shape their own personal design narratives.

In I Used to Be a Design Student: 50 Graphic Designers Then and Now, Billy Kiosoglou and Frank Philippin return to that same structure to share interviews with influential graphic designers from around the world in order to examine how their personal experiences as students shaped their successful careers. This collection looks at the process and creative fuel that goes into a search for crafting one’s own story within a design community and how these field influencers discovered how to make and break their own grids. In addition to the series of interviews and short answer layouts, I Used to Be A Design Student highlights examples of work that these designers created during their time in school juxtaposed with their current personal and client work.

One of the most engaging aspects of this endeavor is that its content is bookended by a series of Swiss-style grids comparing several then-and-now questions and responses. Through this device, an interesting number of recurring patterns unfold to reveal common habits among designers as students and then how those very habits drastically changed as they moved into the professional world. Based on these responses, the average design student knew sometime in their late teenage years that they wanted to become a designer, and most of them cannot imagine working in any other profession. Compared to their student days, most now wake up a bit earlier, exercise a little more often, and find that many of the things that they once couldn’t live without changed from material possessions (such as cameras or computers) to intangible values (family, children and love). When asked about how much they weighed as students and now, Mathas Gorlich’s response was the most entertaining: he claims that he once weighed “too much” and now weighs “far too much.” Interestingly enough, one connecting thread throughout is that many of the designers profiled share a fondness for David Lynch. 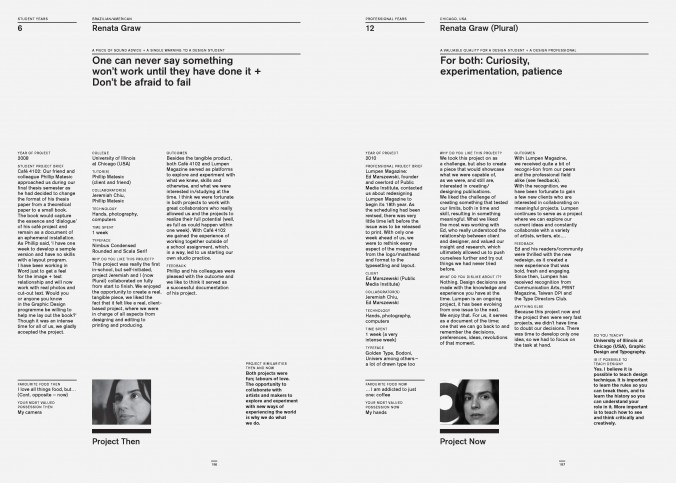 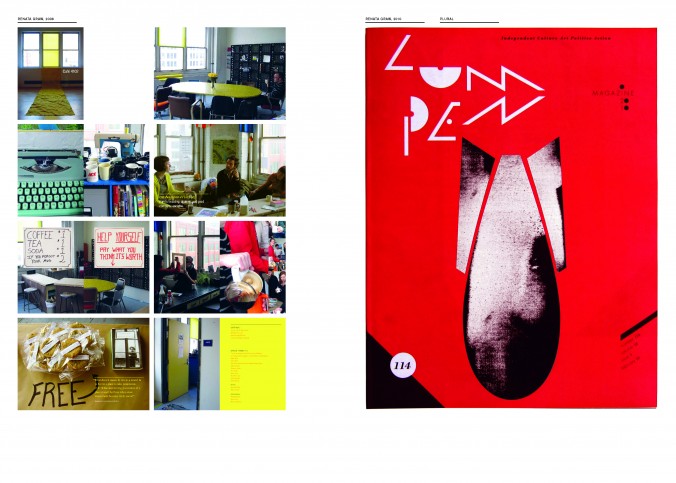 The remainder of I Used to Be A Design Student highlights gorgeous examples of these designers’ work, past and current, along with short interviews asking them about how these featured examples have affected their careers. Much of their work as students shares a commonality of moving from more of a focus on fine art and illustration towards more typographic, grid-based design work. There are a handful of exceptions, however, such as Stefan Sagmeister, whose profession has allowed him an ability to pull away from traditional design, or Chicago-based James Goggin, whose passion for creating postcards has changed little and continues to carry into his career.

Similarly, when asked about what they liked about their featured student project, many of the designers said that they chose earlier works that they felt had encouraged them to grow or reconsider their practice. Students can easily relate to Isabelle Swiderski’s sentiment about her own work in that “there are always details I wish to tweak after the fact.” Many other interview questions posed refer to the more technical aspect of the pieces, such as why specific typefaces were chosen or what type of research was required to complete the projects. One fascinating question was regarding whether or not design could be taught; most agreed that the fundamentals could be taught, but that aesthetic and creativity are visions that must come from students’ personal exploration and experimentation.

One of my favorite prompts was to have interviewees offer advice to both blossoming design students and newly professional designers. The highlights to this were the suggestion of Danijela Djokic from Projekttriangle to “do everything with passion and don’t be lazy” as well as Renata Graw’s timeless encouragement to pursue “curiosity, experimentation, and patience.” Even Stefan Sagmeister offered a noteworthy tip for the bourgeoning design student: “Work your ass off and don’t be an asshole” (amusing coming from Sagmeister, who is infamous for being somewhat of a design world impresario). 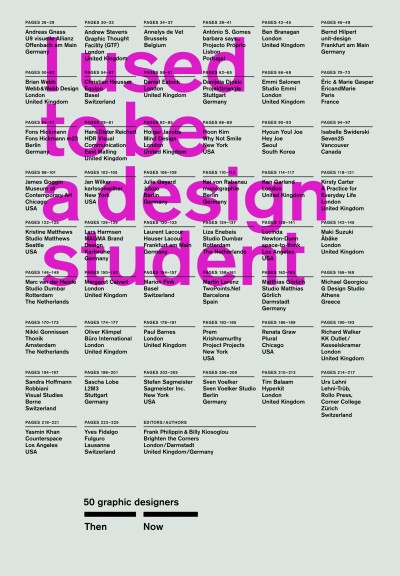 I Used to Be a Design Student is a visually beautiful and thoughtfully designed book that is good for any creative student to keep on their nightstand; it’s ideal to pick up to unwind for the night, when looking for inspiration, or to refer to after a particularly brutal critique. It will drive home the fact that no matter how much your preferences for food and movies may change, the elements of design and the work that you create as a student set the foundation for the type of narrative you will create in the future.

But just remember, as Holger Jacobs of Mind Design in London advises: “Never ever think it’s ‘cool’ being a designer.” 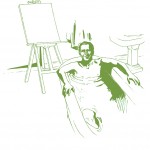 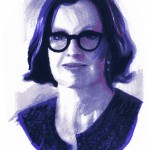