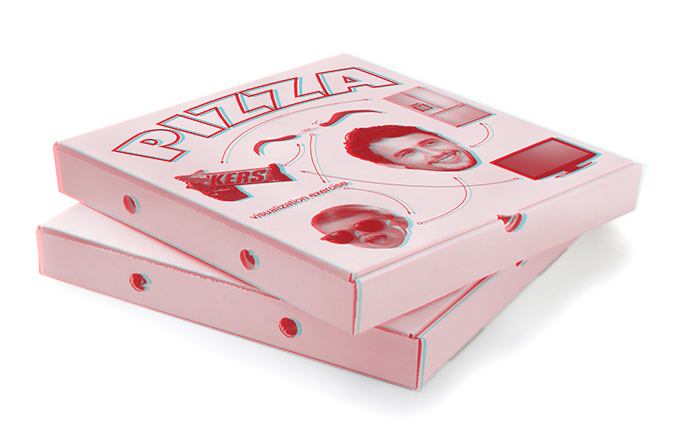 1. Open package of napkins in an articulate manner bordering on obsessive attention to detail. If not inspiring,
this action should be at least captivating.

2. Distribute napkins to members of audience if present.

3. Over speakerphone, loudly and clearly order a pizza to be delivered to current location.

4. Following completion of order, suggest that members of the audience look into their napkins.

5. Read the following text out loud with clarity and even pacing.

“In approximately 35 minutes, a body foreign to this immediate interaction will arrive with pizza, completing a transaction and laying to rest any anxieties or doubts concerning the reliability of such things. Housed inside this body are many memories, some less vague than others, many recalled without purpose or necessity. One such unnecessary memory pairs the sensation of sitting with an image of a young woman, carrying a large box onto a public bus. Inside the box is a fifteen inch LCD TV and DVD player combo. The screen of the LCD TV and DVD player combo displays an episode of The Real Housewives of Atlanta. In the episode of Real Housewives of Atlanta, NeNe is talking to her girlfriend in her kitchen. In NeNe’s kitchen is a stainless steel GE Refrigerator with ClimateKeeper temperature management system. Inside the GE Refrigerator is a twelve pack of Diet Pepsi, a half eaten snickers bar, and a Rubbermaid Tupperware bowl. Inside the Tupperware bowl is an Iphone 4s with 37% battery. On the screen of the Iphone 4s is an image of young woman consuming half of a snickers bar in one bite. The a young woman purchased the snickers bar at a CVS after working a 5-hour shift as a dental hygienist. Earlier in the day a man approached her at the office holding a lit vanilla-scented candle and small, rectangular mirror, oriented landscape. In the reflection of the mirror, the woman saw her own, well-manicured eyebrows. Her eyebrows were gathered slightly, reducing their natural, resting distance of 2 centimeters to 1.5 centimeters. The half centimeter loss of eyebrow distance, verifiable by any standard ruler, is the woman’s biological response to an internal state she will hesitate to but eventually call confusion. The woman has felt this sensation three times before. Once on March 23rd, 2001, when she accidentally applied liquid hand sanitizer to her eyelids, another at the highest point of vertical jump she performed at a crowded street fair in Chicago, and a third time while screaming at her computer screen during a layover at Newark Airport. On her computer screen was a word document displaying the phrase ‘visualization exercise,’ centered both horizontally and vertically, in font type Arial, font size 35, and highlighted in hot pink. Minimized to the bottom right hand corner of the screen is a video of a man giving a tour of his master bedroom. Framed on the wall of the bedroom is picture of a baby wearing sunglasses. Reflected on the baby’s sunglasses is a roadside billboard displaying a large image of a mountainous landscape. 30 feet below the roadside billboard, resting in a patch of grass, is a contact lens case. Inside the right compartment of the contact lens case is an old contact lens belonging to James Franco. Through this contact lens, James Franco watched the Broadway classic Cats. On the stage, in act 2 of Cats, a full-size violin case rests diagonally across an old chest of drawers located center-stage. Inside the violin case is a 6-pack of Spicy Tuna Roll. Underneath the smallest of the 6 pieces of Spicy Tuna Roll is a five dollar bill folded into the shape of a star. This five dollar bill, printed in 1995, was first used by a mother in an attempt to pacify her argumentative child. 12 years after this occurrence, the child has grown into a well-adjusted adult, a positive contributor to society, and will, in approximately 25 minutes, participate in the consumption of pizza.”

Arts & Culture Pineapple (On The Way)

3 Responses to Pineapple (On The Way)

Leave a Reply to “Here, There and Everywhere: Truth and Liveness” at SUGS | Fnewsmagazine Cancel reply