A Profile of Jeremiah Jones 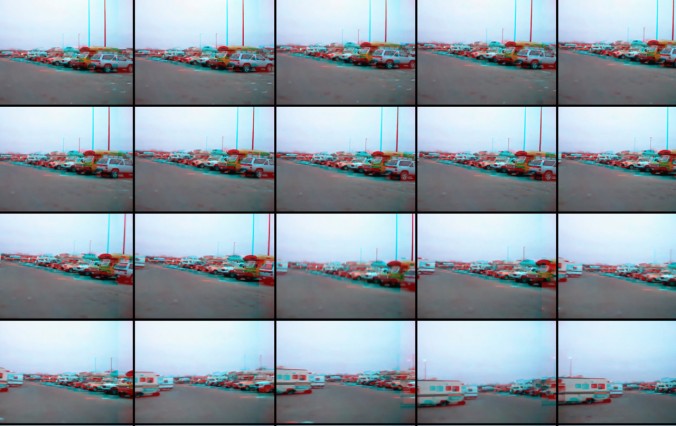 Images from The Information by Jeremiah Jones. Design and 3D effect by Magdalena Wistuba.

Jeremiah Jones, a School of the Art Institute of Chicago alum, is an artist who uses moving image works as a means of exploring both narrative and technical concepts including interests in Americana, art history, mythic landscapes and the construction of the visualized landscape. He has recently taken part in three shows in Chicago: at SAIC’s Sullivan Galleries, The Mission gallery in West Town and the newly-opened SAIC space, SAIC at 900 on North Michigan Avenue.

On view through February 22 at The Mission, To Win and to Hold is a two person show, also featuring SAIC alum Liz Ensz. The exhibition is part of The Mission’s ongoing series, The Sub-Mission, which presents alternative projects in the gallery’s lower level. Jones’ work in the show includes two simultaneous looping projections, Defense and Always, facing one another on opposite ends of the gallery space. The first is a static video projection, the second a 16mm film loop of constructed found YouTube footage, meticulously printed and hand-applied to blank film stock. Due to its handmade nature, Jones’ 16mm loop becomes increasingly degraded as it is projected throughout the run of the show, and the physicality of the object changes the appearance of the piece over time.

Tracing Affinities at SAIC’s Sullivan Galleries includes another found footage project of Jones’, The Information. The piece, consisting of YouTube footage from multiple users edited together to create a singular semi-narrative video, concerns itself with men attempting to find work in the North Dakota oil fields. “They say it’s the one place you can start out dishwashing and wind up earning six figures by the end of the year. Homelessness is the norm,” says Jones. The piece features footage of a Walmart parking lot that serves as a depository and meeting place for men searching for work, enticed by the illusory promise of wealth that the oil fields are said to provide.

SAIC at 900 is a new project and exhibition space meant to bring the work of current students and recent graduates to the Chicago community through an easily accessible and highly traveled location. Looking Down Yosemite Valley After Bierstadt, 2013, presents an idealized animated landscape constructed of multiple animated scenes from different locations. Inspired by the romantic landscape work of 19th Century German painter     Albert Bierstadt, whose depictions of the American west would often consist of fabricated and geographically impossible views, Looking Down Yosemite Valley analyzes contemporary idealizations of the American landscape by presenting a pieced-together view of the region using multiple animated layers of topographically disparate views. Unlike Bierstadt’s realistic stylized scenes, the landscape of Yosemite Valley is visibly manufactured. Cascading trees give way to jagged cuts, and mountains flatly overlap one another as they recede into the distance. Jones’ installation in 900 is the inaugural piece for the space and explores themes that cross over with those of his other current installations. By using the varying physicalities of found images to undo established fictions in traditional American narratives, he creates an entry point to meditation on the way visuality plays into our perceptions of time, place and culture. 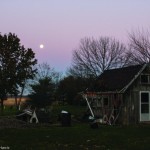 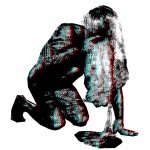