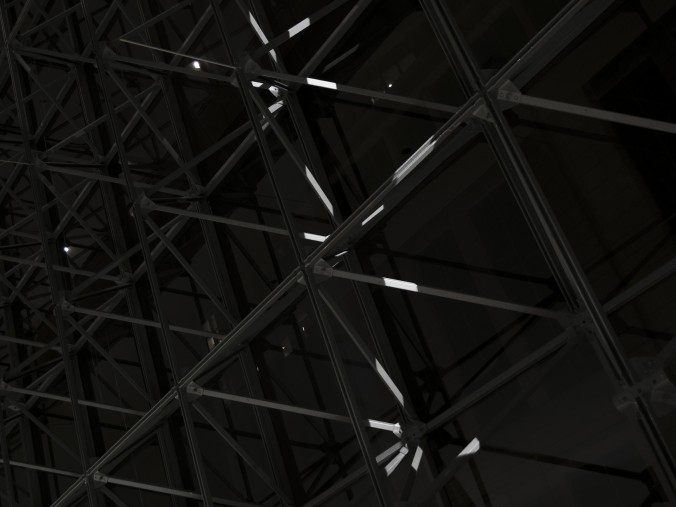 We often fail to see what is right before our eyes. People, opportunities, venues. For many of us, the Chicago Cultural Center (CCC) is one such thing. It is easy to walk by it without looking twice and without entering. Yet it is a richly historical place, a cultural haven, an architectural masterpiece and a free venue open to all. Known for bringing attention to forgotten spaces and overlooked wonders, artist and School of the Art Institute of Chicago teacher and alum Jan Tichy has taken up the task of re-introducing the CCC to Chicagoans. His exhibition, aroundcenter, which runs through April 27, is his take on this great building through various installations and thoughtful collaborations. Rather than focusing on a single gallery, Tichy takes visitors all around the building, leading them to rediscover the wonderful architectural details of the CCC. 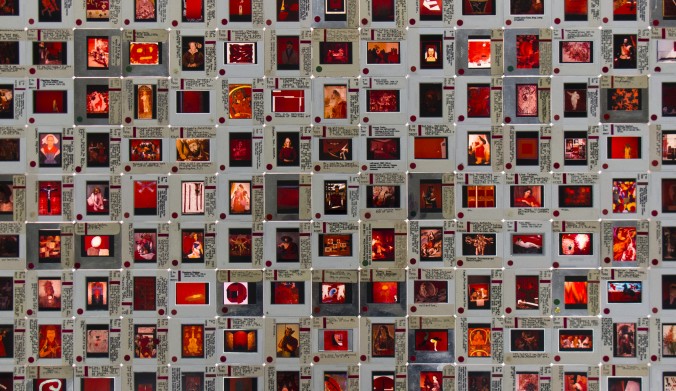 “A lot of the spaces here are attention-grabbing,” says Tichy, “but they are very hard to approach since they are so visually saturated already.” History of Painting (2014), a 9,261-slide installation on the top floor, is simultaneously impactful and harmonious with the rest of the CCC’s architecture. The slides, originally from the School of the Art Institute of Chicago, were disposed of when the institution’s collection was digitalized. The school offered its students the opportunity to acquire some of the three million slides, but curiously, very few people were interested in the giveaway. Tichy decided to keep the slides of paintings — about 50,000 slides. He sorted them by color and arranged them in strips of red, blue, yellow, brown, black, green, magenta and orange. As daylight shines through the window, the thousands of miniature photographs are reflected on the floor. “I usually work in an environment where I can direct the light with full control, says Tichy. “Here, I have no control over the lighting inside.” This lack of control, whether over artificial lights within the CCC or natural daylight from outside the windows, expanded rather than constrained the creativity of the installations. As the light changes throughout the day, the works evolve and transmute. Tichy describes his work around the CCC as a “gentle intervention.” However, the works are also powerful and thought-provoking. One of his works, located in the north stairwell leading to the Civil War memorial, could easily go unnoticed. A projection casts the names, dates and times of death of the victims of Chicago street violence over the past seven years. The names change according to a random rhythm generated by a computer. The sound of the changing slides is reminiscent of the sound of a handgun being cocked. People walk through the stairs like they might through a war, without stopping, without looking. “People are dying all around, and I think that it is something that, especially here in Chicago, we can choose not to see, not to be aware of,” says Tichy. “I hope that some of the works will bring that awareness to a certain audience who might not be paying attention to this issue at this level.” 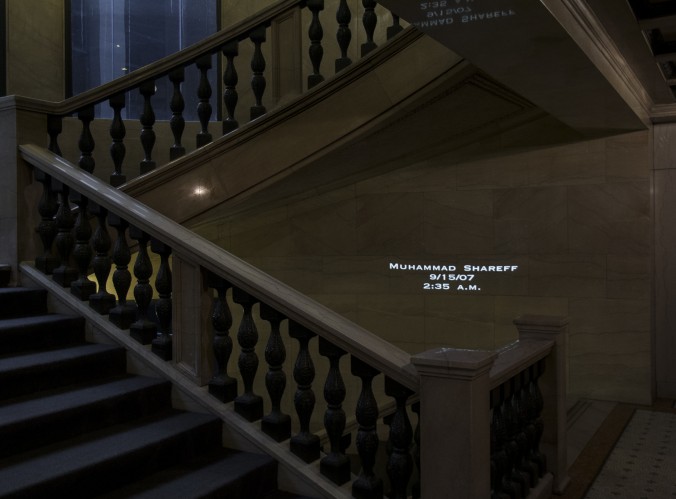 An important component of Tichy’s artistic practice is his collaborative projects. “I see myself as an artist/teacher or teacher/artist,” he says. “There is a place in my practice for me working alone and developing certain concepts, and there is a value in collaborative practice that brings together different perspectives and allows a richer dialogue.” The installation Changing Chicago 2014, located in the CCC’s Chicago Rooms, is a visual response from high school students to Tichy’s Changing Chicago (2012), which was inspired from a series of photographs of the same name taken between 1986 and 1987. For aroundcenter, Tichy also collaborated with SAIC students from the Masters of Arts in Arts Administration and Policy program. The nine graduate students taking part in the project were involved in developing the public programs associated with the exhibit. 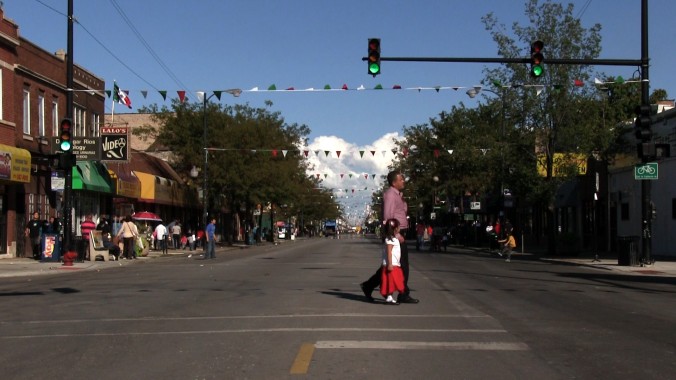 The programming surrounding the exhibition is rich: film screenings, kaleidoscope and camera obscura building workshops, flashlight tours led by Chicago cultural historian Tim Samuelson and poetry writing for young people. Most of the workshops developed by the SAIC graduate students were inspired by Tichy’s work with light on structure and the show’s emphasis on the feeling of getting lost around the CCC. The kaleidoscope and camera obscura workshops for instance, are opportunities for visitors to experiment with lenses and mirrors to get a better understanding of the artist’s process as well as discover the CCC through a new light and new angles. “Jan was really involved, meeting with us every week,” said first-year graduate student Alison Reilly. “He was very straightforward and honest, really open to discussion. He encouraged us to be as creative as possible, and challenged us on a regular basis.” Arthur Kolat, another first year graduate student involved in the project, mentioned Tichy inviting them to his studio at Mana Contemporary. “It was a great experience, and a true privilege.” Besides explorations of light and generous collaborations, Tichy has a strong interest for archives and how to present them to the public. A number of pieces he dug up from the CCC basement are on display in aroundcenter. “Collections are often the history of an institution or a place,” he explains, “and it was something that, as an artist working with these institutions and not just in them, was always a huge interest to me.” In one gallery, an entire wall is dedicated to the documentary project Landmarks Chicago (2009) with photographs Tichy found in a crate in the CCC’s basement. 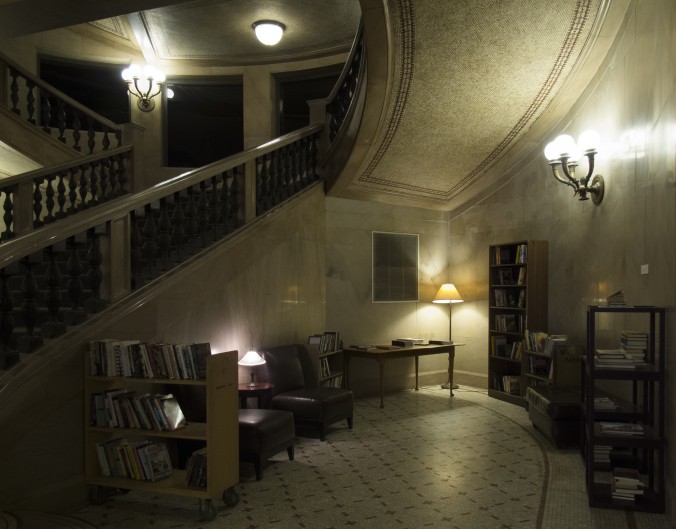 The Library – Photo by Jan Tichy

On the first floor, adjacent to the free library where people are invited to take books home, Tichy has also presented a series of found catalogs of exhibitions that have taken place over the years at the CCC. As he talks about his experience of going through these archives, he explains that he gradually learned more about the place he was working with and found that he could have another role within it. “As an artist working with this institution, one thing I can do is to supplement the roles that, at a certain time, were missing,” he says. “I decided to try to collect as much as possible of these parts of history and eventually exhibit them as part of the exhibition.” This knowing and understanding of the history of the CCC and its past exhibitions has inspired Tichy’s work for aroundcenter. Chicago Nature, a light installation situated in the front window on the north entrance, takes its inspiration from Bruce Nauman’s Human Nature/Life Death (1983). Nauman’s piece, donated to the Art Institute of Chicago after Mayor Daley’s wife complained about its location across from her Randolph Street Office, was placed at the very same spot where Chicago Nature stands today. 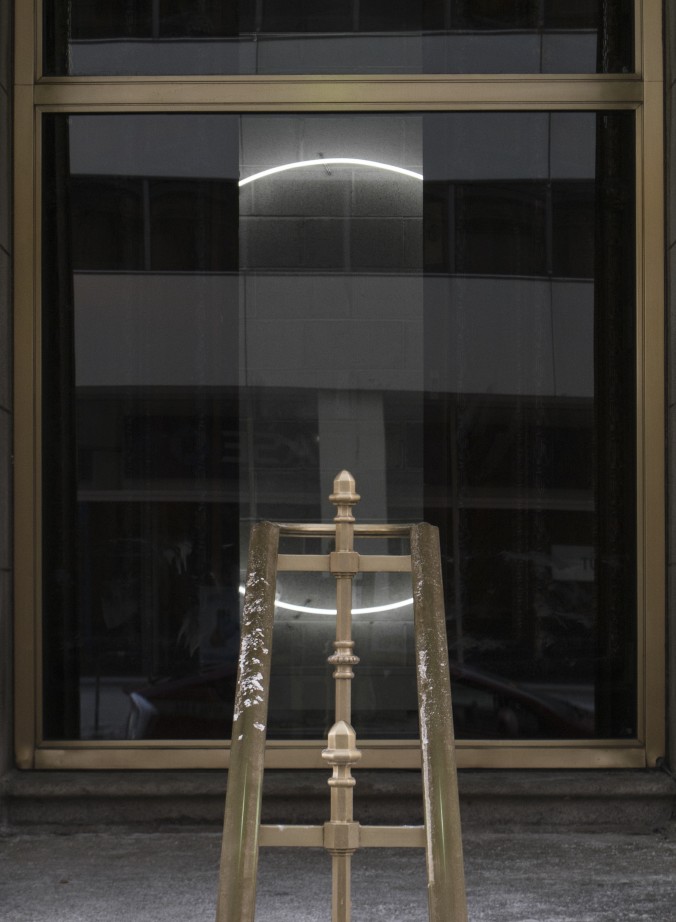 aroundcenter also comes with its own app and website aroundcenter.org, which can be accessed by scanning a QR code printed on the exhibition map. One feature of the site is its audio walks. “I was interested in bringing different people’s perspectives, and I asked seven Chicagoans who in some way have influenced the way I perceive Chicago [to contribute],” explains Tichy. Each of these people has a different relationship to and apprehension of the building, allowing visitors to be guided from a different perspective every time. The app also offers visitors detailed information about each installation, such as the complete list of the victims whose names are displayed in the War Memorial installation. Last but not least, aroundcenter marks the launch of  Chicago Projections, a beautiful artist book gathering Tichy’s architecture-related projects that he has conducted over the years. Published by US Equities and the Museum of Contemporary Photography (MoCP), it includes essays by Karen Irvine. Future Chicago-centric projects for Tichy include a video wall marking the Hyde Park Arts Center‘s 35th anniversary this fall  and project in partnership with DCASE and students from SAIC to create archives for the Chicago Public Arts collection this summer.