An eight-year-old boy stood deep in thought, mesmerized by the robotic actions of a laser cutter as it etched his name into a yellow acrylic sheet the size of a smart phone.

This scene was impossible just two years ago, but as digital manufacturing gains momentum, major companies are investing in small public maker labs.

General Electric created GE Garages, a temporary maker space that functions like a creative laboratory, giving anyone free access to 3D printers and other machines of the third industrial revolution in which digital technology puts manufacturing back in the hands of the public.

GE Garages set up just north of the Chicago River on Michigan Avenue from late September to mid-October. Well-informed employees from TechShop, a growing national chain of public access workshops, helped the public interact with modern manufacturing tools: a laser cutter, a CNC (computer numerical control) mill, a vinyl printer, an injection molder, and 3D printers. These machines are the legacy of mass-production factories — think of the Chicago Stockyards or Detroit auto industry — but as vocations increasingly leave the production line, machines have scaled down in size and price. Industrial tools are becoming personal appliances. 10 years ago 3D printers cost five or six figures. A basic model in 2013 costs $900. 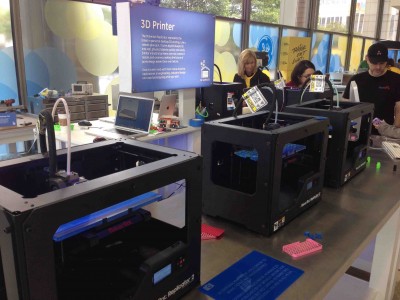 “Makers,” as users of this kind of technology often call themselves, are emerging with the technology. They are often self-reliant, curious tinkerers of sorts who are using these machines to design and reinvent our relationship with objects. In a video on Wired magazine’s website, editor-in-chief Chris Anderson says, “The moment here of desktop manufacturing is not just the tools, it’s what people will do with them.” Designs are created in free 3D modeling software like Autodesk 123D and then printed out in any imaginable form from cell phone covers, to personalized mugs, to wearable jewelry. This revolution has changed the way we interact with technology. Makers can now be the designer, the manufacturer and the entrepreneur all rolled into one.

GE Garages was a partnership between GE and Chicago Ideas Week. Beyond the laboratory, there were hands-on workshops and lectures from key players of the maker movement. Among the speakers was Zach Kaplan, CEO of Inventables — a company that aims to give entrepreneurs access to affordable materials in smaller quantities. “The rules of who can have a factory have changed,” says Kaplan. 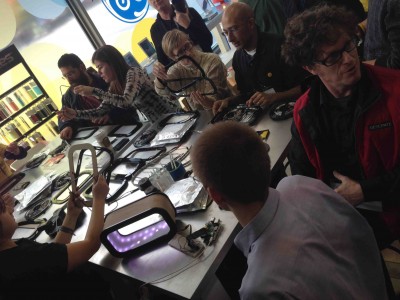 Inventables is collaborating with the School of the Art Institute of Chicago and Data Science for Social Good, a fellowship program that brings together aspiring data scientists at the University of Chicago. The project is Light Up Chicago, which aims to teach 22,000 Chicago public high school students about digital manufacturing and computer science. They’re using a desktop-sized light fixture from Chicago-based design studio MINIMAL and hacking, or breaking into, it. This is where industrial design meets digital manufacturing.

The fixture is constructed from acrylic sheets, LED lights and light diffuser film rolls in an oval rectangle, echoing the shape of Chicago’s rail system in the loop. As part of the project, Andrew Kaye (MFA Art & Technology, 2014) is working with Miguel Perez (BFA, 2014) and Brannon Dorsey (BFA, 2014) to develop software that will run on a Raspberry Pi microcomputer and be embedded in the lamp. “The lamp will have certain features that allow the students to interact with the light output — tweeting #lightupchicago to trigger a behavior, and so on,” says Kaye, who is also F Newsmagazine’s Webmaster.

“If someone wanted to know if a Divvy bike station, [for example], was full or empty, the lamp would light up green if there were bikes, and red if there were none,” says Kaplan. “The cool part is that not only can you pick a channel that has city-centered data, but you can also write your own channel and share the file with people.”

Artists, innovators, creators and designers have more control over their designs than they used to, all the way from the idea’s inception to its creation, and many share their digital files via Thingiverse, an online community of free 3D printable object designers. This is the era of digital craftsmanship, where web generation meets physical creation. At the heart of this revolution is authenticity and customization by, and for, whoever is curious enough to try it.

GE Garages closed its doors in October, but interested members of the public can still print objects on public machines in central Chicago. The Harold Washington Library now has a free open access maker lab, which includes 3D printers, laser cutters, a milling machine and a vinyl cutter. “The innovation lab has scheduled classes for library patrons with zero experience but are curious about the technology,” says Chicago Public Library Branch Manager Yvette Leigh. During open studio hours hobbyists and 3D modelers with more knowledge work on their own projects, “but also give back to the space by teaching librarians about the software,” added Leigh, who hopes the introduction of these machines to the library will impact future societies as much as computers did.

My Icy Heart Melted in Seattle 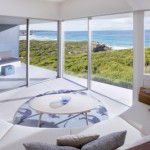 One Response to The Third Industrial Revolution