A Zen master visits SAIC and shares how his art is an extension of his life philosophy. 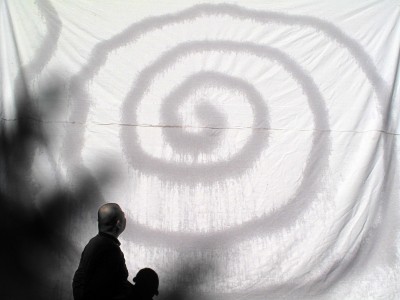 It’s not every day that one meets a Zen master. On October 28, Zen Buddhist master and multidisciplinary artist Master Shen-Long gave a lecture at the School of the Art Institute of Chicago’s campus. He approaches life through a self-reflective and open-minded philosophy, but unlike other Zen artists, Shen-Long extends his practice to the mediums of oil paint, ink, watercolor, sculptural dimensions, and even photography.

Jacqueline Chao, who teaches in the Art History, Theory and Criticism department at SAIC, presented work by Shen-Long including an ink drawing on rice paper called The Nightingale’s Discussion on the Past and Present. “Master Shen-Long was the first to put the nude female figure into a traditional Chinese landscape painting, a celebration of the close relationship between mankind and the natural world,” Chao said, pointing to the image of a nude woman reclining among rocks. The blending of classic brushwork and painting techniques from the 11th century with nontraditional imagery defines Shen-Long’s style of “embracing the past and creating the new.”

Master Shen-Long’s understanding of Confucianism, Daoism and Buddhism also strongly influences his work. For him, art is made when you connect with what he called “enlightenment power,” or the inherent nature of things and their relationship to the universe. In Incredible Awakening, a monkey is drawn in meditation, signifying the opportunity for any being to become Buddha. Dharmakaya shows the faint outline of a body, representing one’s “inherent self-Buddha nature.”

The painting Pureland Within Our Soul shows Shen-Long’s recognizable abstract style of a marbleized background with the hint of a figure in the image. One can roughly discern the outlines of a face. There are no fronts or backs to Shen-Long’s paintings. Large canvases can easily be viewed from either side, which is the sculptural nature of his painting works.

Shen-Long is a master of Chinese Literati Art, a traditional practice that includes poetry, painting and calligraphy. He incorporates all these mediums in pieces like Spirit Transformation of Nine Dragons, in which a dragon symbolizes transformation over the surface of a 200-foot scroll. Using only his hands and fingers to draw, Shen-Long illustrates the grandeur of transformation. Near the end of the scroll, the dragon becomes formless and abstracted. Shen-Long also incorporates a unique calligraphic style of fluid and energetic strokes that dance along the scroll in poetic verse.

Wearing a plain black T-shirt and slacks, Shen-Long points to the screen where Spirit Transformation is projected and says, “Well, how about this?” The audience laughs. “Where is the pure land?” he asks the audience after expressing his desire to go back to this place at this point in his life. When no one answers, he continues, “So let’s talk about the Zen.”

He shares advice and insights about the philosophies and beliefs of Zen practice. The key is knowing and accepting the illusory nature of this world. He tells the story of his motorcycle falling off a cliff. Miraculously, he was saved from falling by a single branch on which he was caught. He remembered one of his Zen masters telling him that “everything is [an] illusion,” and the next thing he realized, he was back above the cliff, a phenomenon he credits to mind power.

When Shen-Long closes his eyes and meditates, he says, “I am the universe. Only spirit is forever. Otherwise nothing is there.” During those few seconds hanging from the branch, Shen-Long saw everything from the mountain, to the grass, to the river, and understood that this was the truth of the universe.

Shen-Long relates that theories of quantum mechanics, which “already have reports say[ing] that all kinds of material is really from people’s mind.” He queries the common dependence on physical materiality.

“We are lost in the phenomenon,” he says. “You have to think beyond the physical. There is a language, an inherent understanding of the philosophy that one must grasp. Ghost is not ghost is ghost, or Shen-Long is not Shen-Long is Shen-Long,” he explains. “If you don’t understand that, you never understand what is the Zen.” In order for the statement “Ghost is not ghost” to work, we need to know what the true form of ghost is. But what is the truth of ghost? In order to understand what that form is, one has to concentrate, meditate or even have a special ability transcended from one’s previous life.

“Nothing is everything, and illusion is everything,” the Zen master says. They are both correct according to him. He talks about a painting he made of a Buddha’s face. “I used the brushwork, ink. And put my mind power. Mixed together.” For Shen-Long, “Art is life is Zen.” And in order to be a true Zen practitioner, “one must meditate and forget everything in order to see everything,” he says. When people becomes themselves, they are free to practice and “make good art.”  Master Shen-Long is not so much an artist looking to create work that is a visual representation of a certain lifestyle, but a Zen practitioner who makes art as a direct extension of his philosophy of life. 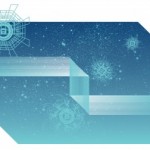 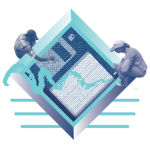