Some Wind for the Sailboat

Reflections on “Einstein on the Beach”

Reflections on Einstein on the Beach

Einstein on the Beach, by Robert Wilson and Philip Glass with choreography by Lucinda Childs, tends to be classified as an opera — it is, after all, an epic work of high musical theater.  Yet it is fundamentally different from opera on many levels: from the collaboration at its inception, to its fundamental structure and content, straight through to questions of its future life, or afterlife, once its creators are gone.

In October of this year, in the fourth revival since its 1976 premiere, Einstein on the Beach came for the first time to Los Angeles, California. It has been regularly described as a groundbreaking masterpiece, and Robert Wilson hailed as the world’s foremost visionary theater artist.  Susan Sontag once said, “I think I’ve seen Einstein forty times or something like that. It’s one of the great theater works of the 20th century.” This piece has the ability to deliver a profound aesthetic and intellectual impact precisely because, as an artistic meditation on the universe itself, it occasions absorptive contemplation while remaining impossible to fully grasp.

The piece is made up of five knee plays — called knee plays because they connect the limbs of the opera together — two train scenes, two trial scenes, a building scene, a bed scene, and a spaceship scene.  They form what Wilson has called the opera’s “visual book,” like the libretto of a traditional opera, but in the language of the visual arts rather than in the language of the written word.  According to Wilson, the visual book is a staged translation of the notions of space found in portraits, still lifes, and landscapes.

Respecting the visual book is essential to maintaining the integrity of the piece not just because the music was composed for it, but also because the actual sung words of the opera — what is traditionally the libretto — are not narrative words.  Instead, they are comprised of numbers: one, two, three, and solfège syllables: do, re, mi, fa, sol.

The four-and-a-half hour opera starts with “Knee Play 1.” To the background of a three-note cadence, two seated characters in distinctively Einsteinian garb make tapping and sliding motions with their hands.  Bathed in beautiful hues of whites and blues, one of the characters recites a random string of numbers, the other a text that begins as follows:

Would it get some wind for the sailboat.  And it could get for it is.

It could get the railroad for these workers.  And it could be were it is.

It could be a balloon

This text was written by an autistic teenager named Christopher Knowles, who was living with Robert Wilson at the time.  Wilson had become fascinated by Knowles’s strange and mathematical use of language and had taken the boy under his wing to encourage his creativity.  This repetitive and enigmatic poetry is a symbol for the piece as a whole — it evokes certain concrete imagery, yet is abstract and non-narrative.  Einstein is not immediately comprehensible yet somehow it is beautiful and moving. Knowles’ texts aren’t evident in the music itself, but they add a layer that makes the piece a collage of sorts.

The curtain then goes up on the first train scene, in which a woman dances along a diagonal line, a child with a lighted box stands on a bridge that is missing one of its sides. As a man writes on an imaginary chalk board, a train slowly appears in the background.  For about twenty minutes, the players enact an abstract choreography of highly stylized formal gestures, which evoke train conductors and passengers.  The boy throws paper airplanes from the bridge and at one point three men pick up a string from the ground, which forms a triangle between them.  A beam of light descends vertically from the sky as a woman runs out and listens to a conch shell.  Everyone is dressed like Einstein, performing in a mélange of lights and smoke set to Glass’s trance-like score.

At a talk at UCLA, which formed part of LA’s programming around the city’s first Einstein on the Beach performance, Robert Wilson commented on the piece’s meaning stating that “it’s a non-narrative piece but there are references throughout — poetical references — to Einstein and ideas he had […]”

Grand themes are explored throughout Einstein on the Beach, with the spectator’s mind constantly touching on concepts like space, time, love, science, technology, pop culture, God, insanity, and so on. Each of these themes are tied together through the figure of Einstein, the 20th century’s most recognizable scientific genius. But herein lies the continuing beauty of the piece. As Wilson has noted, “It doesn’t form any one line of logic, but it’s a piece you can get lost in.  To me what’s still interesting about theater and opera is that it’s okay to get lost … like in a good novel or something.”

Robert Wilson, Philip Glass, and Lucinda Childs are all in their 70s now, and each have developed significant bodies of work since Einstein on the Beach launched their careers almost 40 years ago.  They have said that this is the last time they will revive the production.  The next revival, if it happens, will almost certainly depend on the young performers and technicians behind the show right now.  For the time being, Einstein on the Beach’s next stop on the tour is the Théâtre du Châtelet in Paris, January 8-12, 2014.

Arts & Culture Some Wind for the Sailboat
« Previous Story 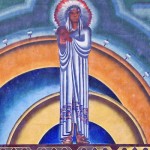