Sifting Through the Subconscious

Artist Elbe Ciña creates a space for freeing the mind

Artist Elbe Ciña Creates a Space for Freeing the Mind 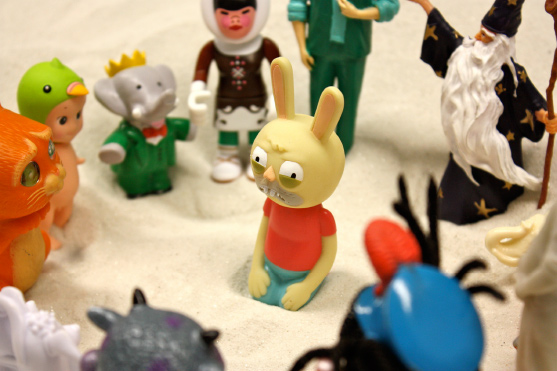 Despite her classic art school look of thick glasses and bohemian attire, Elbe Ciña is well beyond cliché and fearlessly exists in her own category. Ciña has sass. She dances around to her own neurotic beat. Deeply astute, she talks intensely about race, sexuality, art, and psychoanalysis. Born Lindsey Coulter, and raised outside of Chicago in the suburb of Northbrook, Ciña graduated with a degree in Psychology and Fine Art from the University of Wisconsin-Madison in 2008, and is currently pursuing a graduate degree in Art Therapy from The School of the Art Institute Chicago (SAIC).

Her latest project is called Sandbox: An Exploration of the Unconscious Through Symbolic Play. Sandbox consists of a tray, filled halfway with white sand that sits firmly on top of dresser-like-drawers. It’s about waist high, equipped with wheels and brimming with donated toys. “Sandbox is a mobile, interactive installation,” says Ciña. From army men, hand-painted porcelain dolls, plastic palm trees to matchbox cars and the Great Pyramid of Giza, Sandbox’s compartments are a treasure trove of knickknacks and trinkets.

People are invited to choose from an array of baubles to arrange a scene in the sand. The sand acts as a backdrop for the subconscious, and allows the mind to safely venture out in the form of an action figure or miniature bathtub. Reflections on the items chosen can prompt emotions lingering under the surface. The absorption in the moment can help trigger important connections and provide an overall healthy, mental release.

Ciña collaborated with Catherine McCullough, the wood shop manager at SAIC’s Columbus Drive building, on the design of Sandbox after receiving $2,500 from the Garret Lee Smith Suicide Prevention Grant. Joe Behen, the Wellness Center Director, is partly responsible for Ciña’s success, having sent out a campus-wide email with a call for proposals. Ciña considers his passion for her project as above and beyond supportive.

Sandbox is a space for relaxation and expression initially created for the public access room used for meetings, light therapy and stress relief in the Wellness Center. “You know, sometimes I would come in there and there would be a little scene with some of the objects in the tray,” recounts Ciña. Sandbox is now in Ciña’s studio in the Sullivan building and available for sessions. The public still has access every Wednesday from 11 a.m. to 12 p.m., when she rolls it to the Neiman Center on Wabash. Students, professors and visitors alike are encouraged to stop and have a session.

Equipped with a weekly prompt such as “What is happiness to you?” and “Depict a scene that tells about your feminine self,” Ciña usually gets three to four people to step up and play. With no time limit, individuals are invited to dig their fingers into the sand to get deep in their subconscious. “There is always this shift in consciousness. Suddenly people get in a trance where they’re just playing. They forget about me. They forget talking to me, and then they’ll get into this space where they are just silent,” explains Ciña. She claims she is “there to hold the space for something magical to happen.”

Sandbox for Ciña is not solely about getting to the root of deep and personal issues. It’s about the idea of play. When there is one patient coming in for multiple sessions over a series of weeks, sand tray therapy is about processing why certain objects were chosen, and what the scene itself represents. However, Ciña isn’t looking for people to process with her. She wants people to have an experience that is playful and fun. “I try not to get too personal. I don’t ask a lot of questions, or try to get to know who they are. I try to make room for them to tell me what they want to, if anything,” states Ciña.

Sandbox is something in-between art, science, psychology and education. It’s an opportunity to re-visit one’s inner-child. It’s an aesthetic and reflective romp through the narrative delights of the subconscious.