Checking in with a Chicago noise musician. 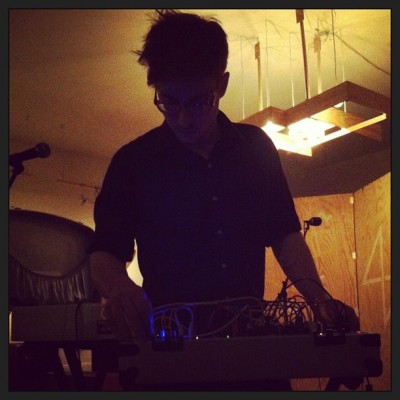 Over screaming from the stage in the next room at Chicago’s iconic Fireside Bowl the musician known as Curtains says he was sick of hip-hop’s rigid rules, so he began a few years ago to experiment with a genre that would allow him to “explore what goes on in [his] head.” The first music he ever really listened to was hip-hop, when he was a preteen. But he knew even earlier that music was a part of what flowed through his veins. “In 5th Grade I asked my brother how to write a song, because I knew I had an idea.”

Lewis joined band in school and played clarinet and sax, but when he discovered his calling, it was “strictly hip-hop” for the next decade. From a middle school-er programming his own beats, he became a figure in the scene. As hip-hopper Crash, the Durham, North Carolina native began opening for the likes of P.O.S. and Buck 65. He dis some work on an album with the Jungle Brothers. He was no joke.

Then something inside of him changed. A darkness entered Crash that started to push against the traditionally positive energy of the hip-hop scene. “I was depressed, agoraphobic, working in kitchens.” He went back to being Dashiell Lewis from Durham and became obsessed with morbid, psychedelic rock and roll and began to make his own “weird, shadowy music” so repetitive it sounded dysfunctional.

It turned out this new, noisy and macabre style brought him back from the brink of a place much darker than the nature of his music, which made him want to try it out on his old friends. But, quite understandably, “people didn’t want to hear that stuff,” he says, so he holed up in his apartment and worked.

Lewis’ turn on Fireside’s stage comes up. He’s wearing hiking boots and jeans with a flannel tucked in. He looks a little all-American behind his glasses. And then he starts to play. The darkness begins to creep into his features, almost visible as a fog flowing out from him and rolling past crimson stage lights down into the crowd.

He plays as Curtains now with just his voice, a loop pedal and some little electronic boxes he keeps in a vintage suitcase. The songs are sad and drone-y. The sounds are distorted and crushed, blown out to a point where his voice doesn’t sound like his voice anymore.

The legacy of his hip-hop career is unmistakable as he uses his mouth to form sounds and effects and records them for loops. The loops become rhythms and blend together. Lewis uses machines to make more sounds and melodies in combinations that are sometimes quite beautiful. Over it all he sings in mournful tones that almost get lost in the loops, like a woman’s cries disappearing in the sound of crashing surf.

After the show, he’ll say there is a structure to the songs and to the entire set, but within it the freedom to let repetition become trance-inducing and cathartic. Although Lewis has been onstage hundreds of times, when he plays as Curtains, a period of anxiety precedes each show. The songs, he says, are incredibly personal, the results of obsessive and continual evaluation of his own psyche. “I always feel lighter, physically lighter, after I play,” Lewis says. “I’m not dark and angry anymore, because all of that gets deposited into music.” 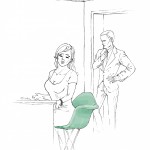