The MCA presents a primer for modern and contemporary conceptual photography.

An Exhibition of Modern Conceptual Photography at the MCA 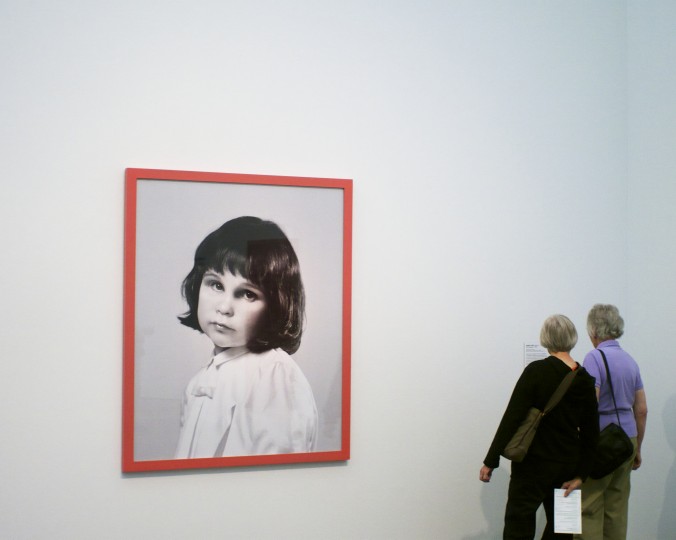 “Think First, Shoot Later,” organized by MCA curator Michael Darling and on view until November 10, is one of an ongoing series of biannual shows drawing from the MCA’s permanent collection. It works well as a complement to the abstraction-heavy works in neighboring group exhibition, “Homebodies,” while providing the guests of the MCA with an easily digestible primer for modern and contemporary conceptual photography.

The introductory space of the show’s four occupied galleries presents a selectively assembled collection of images that have been primarily executed as large-scale, attention-grabbing prints.

The first two photographs that greet the viewer upon entry to the show are Rodney Graham’s “Small Basement Camera Shop, circa 1937” and Jeff Wall’s “In front of a nightclub.” A brief, bold wall description of the idea behind the show explains: “Like much photography produced after the 1960s, these works are highly premeditated, systematic, and staged: in other words, they embody an ethos of ‘think first, shoot later.’”

Not only have both the Graham and Wall prints been produced in the past ten years (being completed in 2011 and 2006, respectively), they are also marked by similar aesthetic tendencies and technical specifications. Graham’s “Small Basement Camera Shop” presents a seemingly innocuous scene of a man working behind the counter of a 1930s-style camera shop (costumed in wire spectacles and a shiny red bow tie), while Wall’s photograph depicts a dynamic but ominous scene of people assembled on a sidewalk outside of an urban nightclub. While the narrative content differs in each of these images, they are notably similar in that each natural-looking scene was executed using a meticulously crafted set inside the artist’s studio (Graham, in fact, is the man in his own photograph).

The remaining prints in the initial gallery space follow the lead established by Wall and Graham. Two large Thomas Demand prints explore the intersection of photography and sculpture as he creates naturalistic scenes of real-world locations out of paper and subsequently photographs them. Stan Douglas’ “Hockey Fight” (1951) recreates the look of a vintage press camera photograph through the presentation of a carefully-articulated narrative in yet another artificial environment.

The exploration of concept-based applications of photography in “Think First” narrows its scope to three separate themes: naturally occurring visual diversity stemming from historically- and technically-informed photography, the self-aware self-portrait and the steadfast dedication to predetermined aesthetic principles.

The second and largest gallery in the show features works occupying a variety of aesthetic spaces, but they are thematically connected through their collective exploration of photographic processes as means to achieve visual abstractions. The presented works of Wolfgang Tillmans, Roe Ethridge, and Elad Lassry, for example, all serve to illustrate the photograph’s potential to simultaneously occupy artistic and commercial spaces by borrowing from the aesthetic tendencies of advertising images. Walead Besthy, Pamela Rosenkranz, and James Welling explore texture, light and color through a variety of experimental printing processes.

The adjacent gallery examines the role of the self-portrait in conceptual photography, with photographs illustrating a variety of interpretations of the self-portrait as a photographic device. Cindy Sherman’s work on display draws from two of her well-known series, one of which involves the depiction of fictitious film stills from classic Hollywood films, while the other creates surrealistic crime scene-inspired compositions using prosthetic body parts.

The intersection of Sherman’s visually independent works provides an appropriate complement to Matthew Barney’s macabre “Cremaster 2: The Drone’s Cell,” in which the artist depicts himself as the notorious murderer Gary Gilmore. Gillian Wearing’s stunning nearby print (“Self-Portrait at Three Years Old”) makes further use of prosthetics and theatrical elements, but in this case the artist has used these tools to transform her adult face into an eerily-realistic version of herself as a toddler, with only her eyes peeking through the illusion.

The final gallery space switches gears, analyzing the roles of aesthetic form and visual structure in photography through the work of students of renowned photographers Bernd and Hilla Becher (known collectively as the Dusseldorf School). The Bechers are widely known for their grid-inspired arrangements of photographs depicting different types of industrial structures in similar compositions. “Cooling Towers,” a self-explanatory series of twelve black-and-white prints, is on display. The Bechers’ primary principle — maintaining visual consistency across a body of work as a means of developing a long-term aesthetic — is apparent within the works of the artists sharing the space, but with differing applications depending on the photographer. Andreas Gursky’s “Avenue of the Americas,” for example, uses both architectural and grid-based elements, but it is composed as one single image, as opposed to the Bechers’ series. Thomas Struth’s photos are on a similar scale to Gursky’s, but while he also explores the special examination of architectural feats, he does so without the explicit geometric influence that is so readily present in Gursky’s work.

The works in “Think First, Shoot Later” present a variety of perspectives and ideas that have influenced the photographic world for the past 40 years, but its installation fluidly connects these oppositional viewpoints through the exploration of the artists’ multidimensional motivations.