Word on The Street vs. Discourse in the Ivory Tower 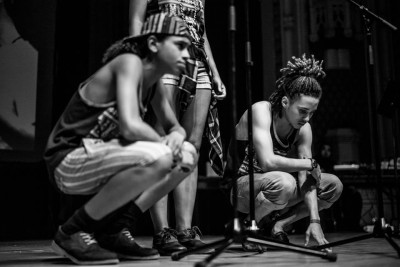 The School of the Art Institute of Chicago is an art school with departments that range from Painting and Drawing to Technology and Sound. Work can mean oil on a canvas to a performance of sitting still, or a sculpture of found objects. Students at the school have a broad conception of the definition of art. So, what could SAIC possibly be leaving out? Those who passed through the University of Chicago campus or the Auditorium Theater downtown the week of August 12th may argue that SAIC  misses out, by virtue of its privilege, on some truly deep engagement with local concerns.

The international youth poetry slam Brave New Voices (BNV) graced the stages of Chicago this August for their annual competition of high school Spoken Word. Spoken Word is an art form with roots in Chicago that artist George Watsky, the MC of Saturday night’s BNV Finals, defined as a combination of rap, poetry, and sometimes comedy. The weeklong event included a bracket of bouts (competitions) and writing workshops from the form’s top artists. Students came from countries as far away as South Africa and England, and from cities all over the states. The poems tend to be highly performative, personal, and deeply connected to the artists’ communities, struggles, and activism. Brave New Voices provides a space for hundreds of students to come together to communicate with each other about where they’re from.

This year poems’ topics ranged from stories of incarceration, deportation, local politics, racial and queer identity, code switching, feminism, and personal narratives of family, depression, and loss. I sat in the audience and watched white students from North Carolina stand in front of the mic clenching their fists, braving confidence to “spit” the first line, while black students from Detroit, LA, and Chicago, and brown students from Albuquerque, Arizona, and New York yelled back at the stage: “You got this!” “Go hard!” and “Let’s go poets!” I watched the Chicago team exit the stage after spitting a poem about a member lost to gun violence while white students from Denver and Asheville, Native American students from the southwest, and Philippino students ran up to hug them, pat them on the back, and tell them how they’d changed their lives with their words.

Members of Brave New Voices spent the week in dorms on the Hyde Park University of Chicago campus and attended workshops and competitions in the school’s new Reva and David Logan Center for the Arts. One University of Chicago student, Theo Shure, who works and lives nearby said, “I’ve never seen the Logan Center come alive like this. It’s extremely refreshing.” She added that she met and spoke to a few coaches in the Logan café and later in line at a food truck waiting to buy a snack. The coaches introduced her to their teams and she shared in many hugs and kisses on the cheek, celebrating the undeniable love and energy of the competition. For her, it was a new campus experience of relating across difference. Her friend standing next to her told me: “In class you can sit and talk about race and societal problems all you want, but in the end you are still afraid of walking outside at night near campus on the south side.” 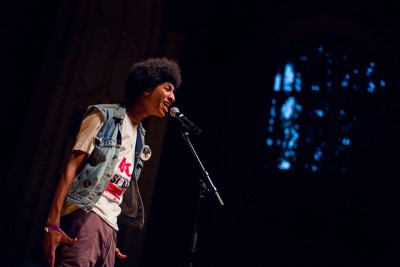 Interestingly, however, attending Brave New Voices allowed for real conversations about race, gender, class, violence, and education to happen in a more honest and radical way than the academic classroom. What’s incredibly powerful is that it’s a conversation directed by voices of teens. I thought about this many times — but specifically during the piece about Chicago’s gun violence. It is a remarkably articulate, insightful, and moving poem. I wondered how many teachers have heard that poem; how many police officers who follow the students around their neighborhoods have heard the poem; how many of us who don’t live in the poets’ neighborhoods but craft judgments about them, point blame at their problems, and claim to know the solutions — how many of us have heard this poem — with their voice?

Attending the week of activity I was reminded about the deep potential the arts have for creating spaces of discourse and opportunities to amplify voices that can otherwise easily be muted. I thought of one line of an artist’s poem that spoke about wanting to be a high school teacher who taught poetry — he spoke of how the value of a career was not in its salary, like the value of the product wasn’t its price. “Paper is cheap, pencils are cheap-but you could write poetry to cover the paper like gold.” In other words, it isn’t an MFA from a costly institution that defines the quality of artistic production.

Art can and should serve many roles. BNV teens reminded me why I decided to be an artist — a decision that has felt exhausting to validate throughout my semesters here. Growing up, I saw around me mural painters, printmakers, poets, rappers and artists of all kinds whom I considered to be deep critical thinkers, community organizers, activists, parents, and leaders. I came to SAIC to become a better artist, an educated person, and a more prepared leader and activist. I came haunted by Queer Black Feminist writer Audre Lorde’s famous warning, “You can’t dismantle the master’s house with the master’s tools,” but I was equally aware of the price of culture capital.

Have SAIC students experienced the full gamut of contemporary art? Certainly not while admissions excludes so many of our city’s most talented young people. Certainly not while SAIC continues to remain unengaged in conversations and activity that so deeply affect our local artists. Certainly not while our students remain in high majority as privileged artists who by token of our privilege are able to ignore these conversations, actions, and works of art. Like the University of Chicago student who was surprised by the level of discourse possible outside of her classroom, perhaps what SAIC students are missing in contemporary art is currently happening outside of art school all together.

Arts & Culture, Literature Word on The Street vs. Discourse in the Ivory Tower
« Previous Story 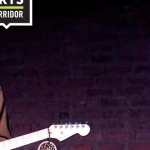