A selection of food trucks with affordable meal options that park around the loop. 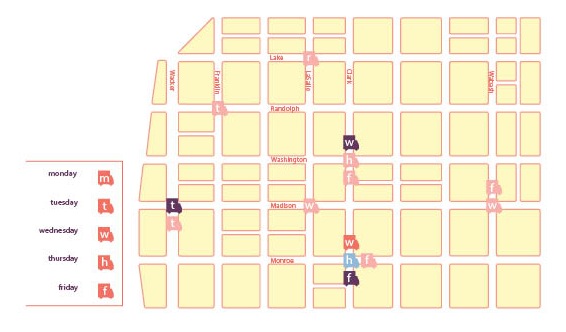 A severe hankering for street food is a common symptom of Spring Fever. In Chicago, there’s a cause to celebrate the season: after two years of lobbying, the Chicago City Council finally legalized on-board cooking last July, which means quality restaurants, bakeries and other ambitious food truck owners have been able to extend their diverse cuisine to hungry pedestrians.

Though the city’s strict codes on gas lines and parking hours still make food-trucking a challenge, many mobile food hubs are providing some of the most delicious lunch items in the Loop. A solid mid-day meal is important — as is that pocket change you’re saving — so here are a few affordable, charming and delectable lunch options, all in the open spring air.

Co-founder and manager Manny Hernandez has decided to bring Mexican superheroes to downtown Chicago, and their most heroic feat has been a smackdown of some of the best tamales in town. Servers don Luchadores masks as they dish out seven to nine different kinds of homemade tamales on any given day of the week. Look forward to the Tamales en Nogada, with ground pork and veal, dried fruit, a walnut cream sauce and a kick of pomegranate, making a landing in time for Cinco de Mayo.

“Curry up or get outta our way!” reads the front bumper of the
Curried Mobile. It’s probably good advice because the gluten-free Indian food is fresh, fast and healthy. After converting an old Chevy ice cream truck into Chicago’s first Indian food truck, the Curried crew now serve vegan and vegetarian plates as well as deliciously meaty curried meals straight from the kitchens of their restaurants. The chicken tikka masala and saag paneer are among the most popular dishes, but look for a tangy chicken achari this spring.

Soups in the Loop

$6 for soup and
freshly baked bread

Owner Chugger Lupo is a momma’s boy, but he should be proud and so should his mom, because the handmade soup from his food truck provides some deliciously heartfelt meals on four wheels. Soups in the Loop was inspired by Lupo’s time in the kitchen with his mom and her cooking, and it has partnered up with Cafe la Cave to bring some of her best home cooking to Chicago. Besides steamy favorite chicken wild rice, try the cucumber and avocado soup.  They’re also adding a second truck that lets you build your own salad. Each cup of soup comes with bread from Il Mulino Di Valenzano Bakery.

$8 for a mini slice of deep dish

As part of the 17-year-old Caponie’s Trattoria — ”consistently delicious Italian” as owner and chef Dan Lamberti urges — Caponie’s Express carries on the tradition of Italian zest and sustenance. Everything is made from scratch at the restaurant just before departure, so it’s still fresh when the red, green and white truck parks at lunchtime. Lunch items include deep-fried panzarotti and arancini, but the best-sellers are the deep dish pizza and calzones. This season, the Express will introduce lighter menu items like wraps and more health-conscious foods.

Chicago’s “fried chicken food truck,” The Roost, might be bona fide southern comfort food at its best because of the time owner Joe Scroggs and his staff put into the staple dish: fried chicken. To get a bolder, more authentic North Carolina-inspired flavor, the meat is marinated for 20 hours before it’s thrown into the fryer, and preparation for each day’s homemade menu starts at 5 a.m. Scroggs suggests the popular chicken filet sandwich for lunch. New menu items this spring will include grilled chicken salad wraps and kabobs.

Not all cupcakes are served on a crust, which makes Chicago Cupcake desserts unique. Atop a crunchy shortbread, chocolate wafer or pretzel crust, the cupcakes are baked with ingredients like mousse and cheesecake for a creamy, ultra moist treat. Owner Brendan Bolger says menus vary monthly with about 30 different cupcakes on rotation. The Motherload is always a favorite: chocolate cake with peanut butter filling on a pretzel sea salt crust, topped with caramel Italian buttercream frosting, caramel drizzle and pretzels. 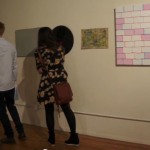