A conversation with Assaf Evron. 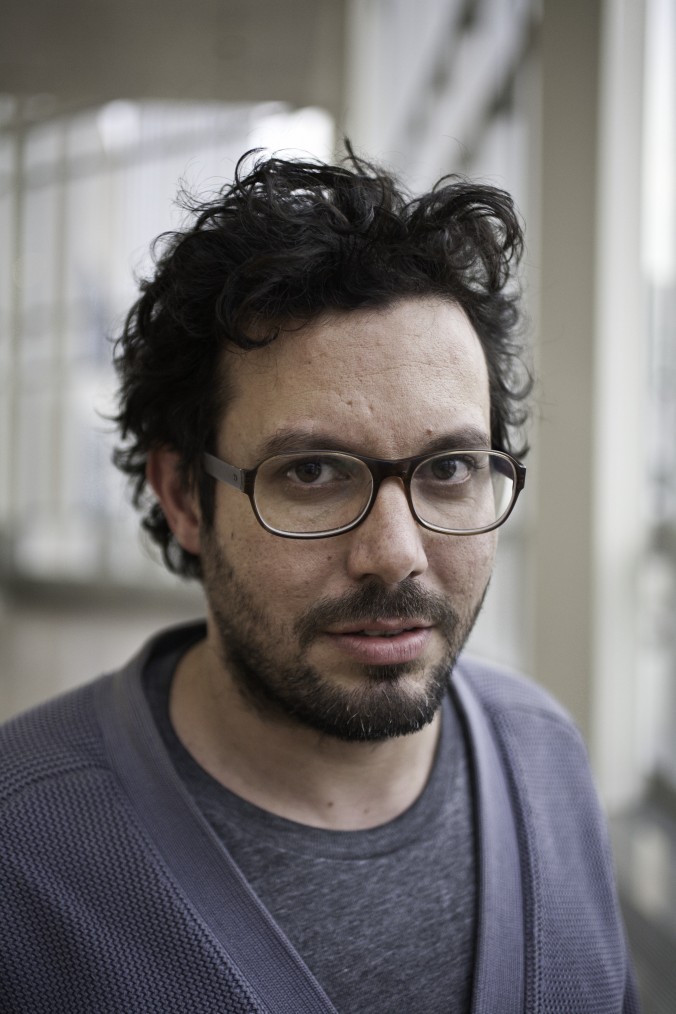 The looking glass holds in its exact depths the ability to capture and release our vision. It is an object that has mesmerized authors, poets, physicists and artists. What the looking glass does is provide the semblance of what we think is reality, but in its reflection back to us, the image is both slightly distorted and immensely familiar. Assaf Evron, an MFA student at SAIC, looks to bring these ideas into focus. As a photographer, he has been looking through lenses for years. His recent sculptural work speaks to how irrelevant exactitude becomes especially when language and image are in a perpetual state of translation.

I met with Evron in his very well put together studio. The space was arranged like a small gallery with sparsely laid out objects on pedestals, three wall pieces and a study desk. The monochromatic exteriors of the objects were all suited to exist in the space. Ranging from faux granite stone to speckled flooring, their arrangement welcomed conversations about what they represented in relation to their position. At the room’s center a futuristic, polished gray, oddly shaped object rested on a pedestal. The object was too large for the platform and its sanded edges and smooth surface melted over the sides and beckoned the viewer to inspect beneath. Any view of the studio was interrupted by an artificial rainbow floating in the center of the room — an acrylic sheet suspended midair by a light stand. The translucent edges of the acrylic disappeared from sight, and in the center a small rainbow affixed itself to whatever one tried to see on the other side. Three arcs, blue, red, and yellow, would hazily disappear into the background if not seen in focus.

I sat down with Evron to discuss his recent work and his thoughts on language and images.

GV: I’ve been looking at your work and I’m captivated by the representation of color. Your piece “sRGB 1996” is a shape that takes its origin in how computers read color, which you then construct as a physical object. Can you talk about the construction of your work? 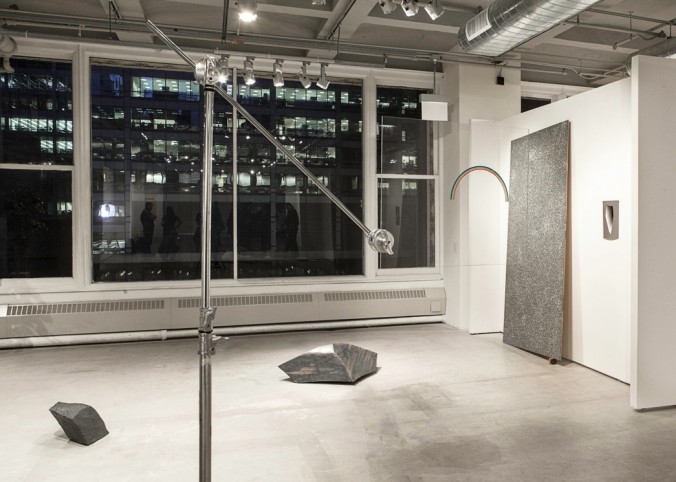 Gallery image courtesy of the artist.

AE: That’s a good way to start, with representation. The object and its construction are a mathematical formula, but in order to make sense of such an idea we make a visualization. This is one of many. It is a color space, a visual illustration that creates an object. For me, this is fascinating because the shape of the object is contingent on the mathematical formula that created it, which is then also contingent on the medium and the limits of the actual formula. I wanted to bring it back to the world as an actual object. So I took the 3D model, or representation of color space, and sliced it into pieces, I drew it by hand and assembled them as a topography, in order to almost solidify it like rock. I then covered it in epoxy paste and sanded it down. A couple of things that happened in the process: in a way it contradicted its mathematical formula or the functionality of the color space; it’s based on loss of information, and also where digital production and handmade production meet. There is an interesting transformation that happens; it’s more of a transformation rather than a translation.

GV: The edges of “sRGB 1996” and other pieces seem to really capture the limits of translation.

AE: Representation and symbolic form are exciting. They are a visual document, or visual appearance. There is a whole world of meaning attached to things, but at the same time, those things are not part of it. Somehow these objects direct us back to how as humans we make meaning into things. Translation is something different. I like Walter Benjamin’s take on translations and his thoughts on language. For Benjamin, translation is expanding the gamut of meaning that something can hold. Think of bread, for example. When you say “bread” as an American, the French say “pain.” I think “lechem” in Hebrew. We all point to the same thing, but each one of us imagines it slightly differently. Somehow the meaning changes, it expands. It’s how I think of translation. It makes meaning expand. 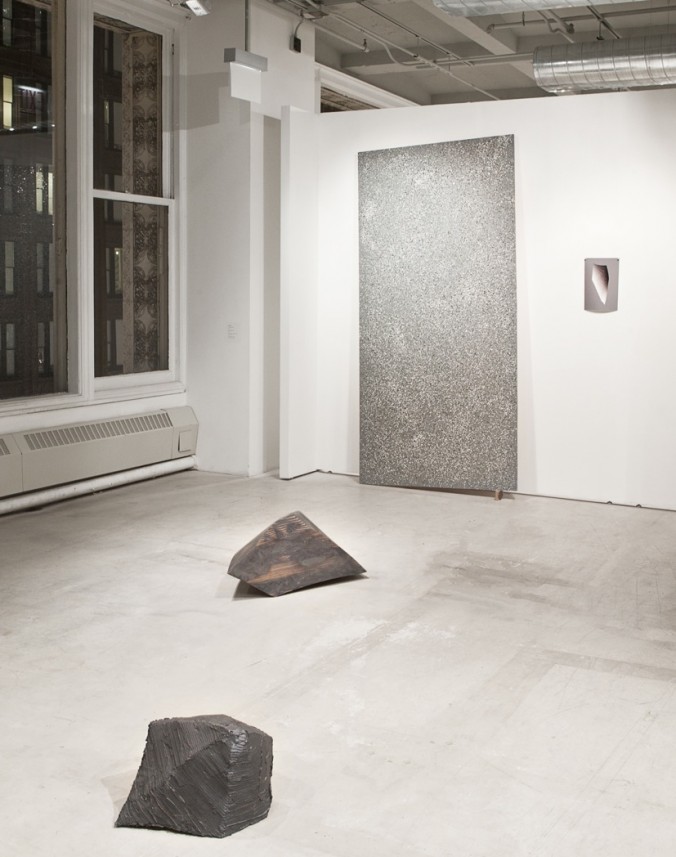 Gallery image courtesy of the artist.

GV: Since we’re on the topic of language and meaning, let’s focus on this stone object. I’ve thought about art and its capability to use language in different ways. What examples do you see where the language of art is transformative?

AE: Now we’re in the world of ideas. We see how images move across history in a non-linear way. That’s why this object moves in various layers of meaning, art and image making. It can be popular culture like a sci-fi model, it can be common computer-generated architecture; it could be resonating with the way it deals with melancholia. Think of Albrecht Dürer’s illustration “Melancholia” and the polygon of rationality that sits in the background, its a reference point. These are the ways that the image moves through the world.

GV: This physical representation doesn’t limit itself to a concrete idea, it doesn’t tell you, “I’m color;” it can only say, “This is what color looks like.”

AE: If you could say it’s about color, or here is red, or green, that’s translation. For me it is to create open images that can be legible or read in various ways and by doing that it’s on one hand very demanding for the viewer, but also very enabling. In one end you can read it as not giving enough information for the viewer, but on the other hand you give them liberty.

I like leaving a space for the viewer where objects have an origin, but they transcend toward ground for new possible meaning. Things are always saturated with invisible meanings, and on the other hand there’s the way the viewer meets the object. It’s sort of like a riddle, but riddle is also not a good word, maybe mystery. Riddle has an answer, but mystery is unknown and keeps intriguing. So you could say I’m trying to find the balance between both complexities.

AE: Not so much that, but in simple things I want to take objects out of their obviousness. Simple things are simple things, but sometimes it’s when you really look at them is when interesting things come up. 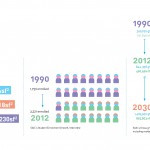 The Future of Fitness at SAIC