Binaries and doubles reveal their rupture and illusions disclose their mirror-magic. 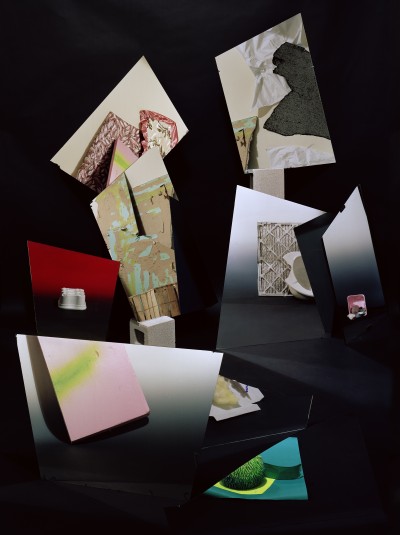 The Alignment by Jessica Labatte

The artists in Fractal Semblance, currently on display at Roots and Culture, address the transitional nature of photographic images: how representation both mirrors and alters its original. But the artists don’t pause there, caught in a discourse orbiting Planet Art: while binaries and doubles reveal their rupture and illusions disclose their mirror-magic, the artists address the thorny concept of reality. Contemporary photography, with much respect and reverence to its practitioners, is documentation only; it no longer enjoys (as with all contemporary art) the goal of depicting reality — a reality, our reality or your reality. Contemporary reality resides somewhere in the reveal – the instant when the curtain lifts, the illusion shatters, or the shit hits the fan – before the next set of smooth diversions arrives. These artists have subtly reconstructed these moments, through serious play and frank gestures, and though no explosions occur – what we see is a careful reassembly of the scattered pieces. A semblance of the original and a fractured new order. Fractal Semblance is a cohesive and interesting collection of work that challenges a more proper and smooth perceptual (and conceptual) world.

In Liz Nielsen’s diptych, “Side A/Side B,” a snapshot of sky becomes daily behind telephone wires, and mythic before an outsized, lunar orb. Backed by vast polygonal blacks and Photoshop gradients, the smallness of the everyday images is re-grounded in a synthetic flatness. It is a perplexing pair of images, constantly doubling-up on each other: not day/night, real/fake, or mundane/magical, the images build into the stylized background, turning into glossy, then earnest, then manipulated moments in which we can glimpse a simultaneity of the everyday in the static composition and ephemeral images.

Nielsen’s “Double Mountain” is equally provocative. Chilly snapshots of mountains interact like reflections, between angular, geometrical framings and a murky blue wash. Inscrutable barcode brands on each murkily enfolded photograph rupture the ethereality of the piece. There is something mythic here, too, in this unassuming image, something tertiary and subliminal occurring between the two mountains, at a high altitude. The roof of the world becomes gradually inverted, and the monumentality of the mountain dissolves in its too-real reflection. 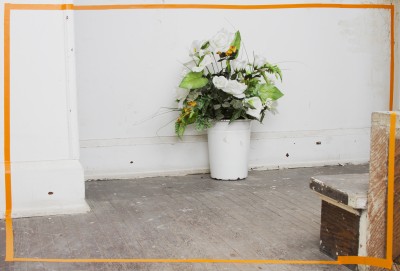 Robert Chase Heishman’s “_IMG #3” and “_IMG #4,” though a room apart, speak to dichotomous before-and-afters and perspectival trickery. Both photographs of fake flowers and white walls are ringed with strands of utilitarian neon tape, framing our view with a dendrochronological series of strips, traveling over spatial obstacles, peeling at corners, ignoring its ineffectuality as an illusionistic device. The bucket of fake blooms is framed, simply, neatly, or determinedly patched over to preserve the already faltering optical sleight. The result is a wonderfully nuanced and shifting take on the boundaries of visual perspective. Heishman’s “_IMG #9” employs the same tape-frenzied agenda, but this time in an uninterrupted interior scene. Here, vivid green tape flattens and obliterates the dimensions of a room, disclosing its materiality only where the ends don’t meet – short-circuiting itself as well as the illusion it has [not] created. 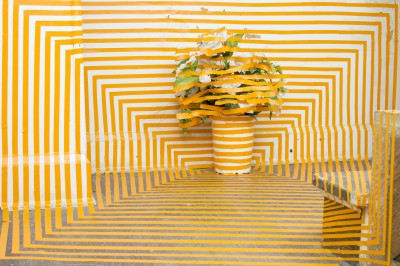 Jessica Labatte’s “The Alignment” dominates the largest room in the gallery. Shards of a mirror-like surface reflect bits of household detritus, balanced on a black theatrical backdrop with cinder blocks (the only whole and concrete moments in this assemblage). The still image is shattered, and recognizable pieces of domestic life and house guts are presented as accidental evidence of some insidious, careful deconstruction. This isn’t the aftermath of a violent attack on image-making; rather, the image presents us with its own architecture: poised, posed, and fragmented. In Fractal Semblance, we see this tenuous poise reinterpreted through perspectival play, complex dichotomies, balanced forms and arguments with architecture. We see more than a destroyed and ruptured reality, and we see less than a full-fledged illusion: what we see is a place between. 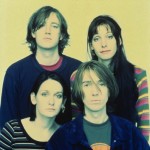 The Return of My Bloody Valentine?

Movies to Watch (Or Not to Watch) When Bored...