A division was created between more acceptable forms of homosexuality (i.e., devoted, monogamous, upstanding gay couples) and everyone else (i.e., S&M, body modification, trans, etc.). Opie represented these individuals in a way that valued their differences against the pressure to integrate into a more “palatable” version of homosexuality. “The Great Refusal” is thematically aligned with Opie’s desire for a multitude of perspectives on how queerness can and should be represented. 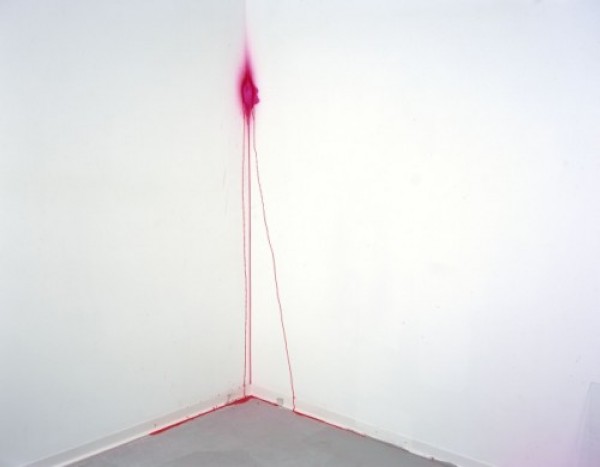 “How can an artwork claim to represent a queer aesthetic if it does not overtly represent gender or sexuality?” “What are the domains of queerness and how can they expand?” Some of the most interesting strains of queer thought and art practices are developing these themes. The first work inside of the expansive exhibition “The Great Refusal: Taking on New Queer Aesthetics,” featured in Sullivan Galleries, was a photograph depicting a grid of overlapping red laser beams emerging from a black background. The image, “Untitled (Laser on White Paper), 2011” by recent SAIC alum Assaf Evron, could be a study of light, space, and perception. Its queer investment is not overtly apparent, which is what makes it an interesting and important inclusion in the show.

Queer aesthetics and theory have been a leading prominent theme in the lectures, performances, and exhibitions at SAIC this semester. Leading artists and intellectuals, including photographer Catherine Opie and filmmaker and author Dr. Susan Stryker, have spoken to packed audiences about the history and trajectory of queer thought and artistic practice, their identities being at the fore of their discussions. Interestingly, however, both of these guest lecturers’ current work does not express an overt interest in representing only sex and gender issues. Dr. Stryker is researching and writing about the ways transgender studies and science intersect. Opie has more recently focused on landscapes and portraits of high school football players, themes that are aligned with her interest in identity but diverge from a series, like her early portraits that represented members of California gay, lesbian, and body modification communities. These leading queer artists illustrate a feeling that queer thought and art practice needs to continue to move into areas ripe with heteronormative assumptions and practices.

“Untitled (Spray Paint), 2012” by Jamie Steele is another example of representing queerness in an unexpected form. This work delineated each boundary of the gallery with a neon pink spray paint mark. The marks appeared to have been made by holding a can of paint in one place for an extended period of time. The result was a purposeful, thick blot of paint at about eye level, with thin pink trails leading to puddles on the floor. The piece had traces of embodiment — the marks immediately brought up the consideration how long someone had to stand there to complete the painting. More than image making the, piece spoke to the passage of excessive time.

“Untitled,” 2012 by Nikki Woloshyn, at first, looked like two dirty, glittered thumb print smudges on an otherwise blank piece of paper. A closer look revealed they are not made with ink but some kind of textured material. An even closer look revealed a set of well-used fake eyelashes. Similarly to Jamie Steele’s spray paint, the eyelashes are a trace of a material history and queer expression. The simplicity of their representation highlighted what was not there, the person who used them, their experiences, the other parts of their identity.

Steve Reinke’s “Untitled,” 2012 was a series of four blot-like ink drawings of phrases framed and hung in a way that suggested a relation, although it was not immediately apparent. They read “Feelings are Stupid,” “Prophylactic Truvada,” “Sometimes Fucking Helps,” “Brian Donald Jones.” Besides being easy to agree with, the two declarative phrases pad the proper nouns and place them in an emotional (or anti-emotional) landscape, especially with the realization that Prophylactic Truvada is a hopeful HIV prevention drug and Brian Jones is Reinke’s partner. The phrases can be read as a complex of queer concerns and attachments.

Still, overt representations of alternate sexualities is a vital project, although this is not a new project — much of the work in the show could be situated in this vein. One of the most important tools for any struggle for equality is the ability for a constituency to control its own representation. Catherine Opie spoke about this subject during her September lecture in relation to her well known early portrait series. “The gay and lesbian community was not being represented in a way I wanted to see them,” she explained. The artist went on to say that after the peak of the AIDS crisis in the 1980s and early 1990s, there was a kind of sterilization of the public image of queerness. A division was created between more acceptable forms of homosexuality (i.e., devoted, monogamous, upstanding gay couples) and everyone else (i.e., S&M, body modification, trans, etc.). Opie represented these individuals in a way that valued their differences against the pressure to integrate into a more “palatable” version of homosexuality. “The Great Refusal” is thematically aligned with Opie’s desire for a multitude of perspectives on how queerness can and should be represented.

“Nick and I Playing Our Afternoon at My Parents,” 2012 by Gregg Evans was a portrait of two young handsome men in a wooded area spotted with fall leaves and barren oak trees. One has his back to the camera but his head turned, staring directly into the lens with what looks like annoyance or reproachfulness. The second man, mostly hidden from view by the body of the first, is on his knees with his head nestled in his companion’s crotch.

Hannah Rodriguez’s “Made Men Series” is a collection of collaged images of mostly black, highly masculinized bodies who have, in various ways, been overtaken by flowers and ribbons. Hung in thrift store frames, the images are composite identities that offer an alternative to the “naturalness” of certain bodies being associated with certain things.

“The Great Refusal” offered insight into the recent practices of over 50 known and emerging queer artists. As a survey of intentionally and importantly diverse practices, a claim for a definitive “queer aesthetic” is not possible. What the show did provide, however, were sparks of new queer trajectories nestled in well-executed and interesting, but actually more established, traditions of representations of sexuality.