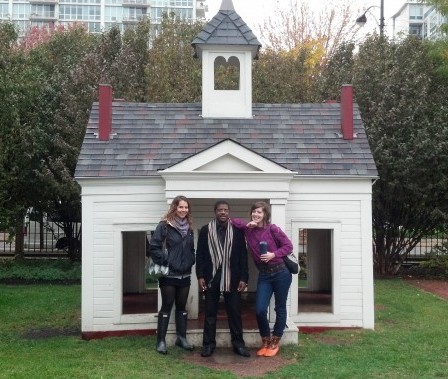 The mysterious interiors of Chicago’s architectural gems were quasi-accessible during the 2nd Annual Open House Chicago weekend, October 13-14. This tour of historic sites was organized by the Chicago Architecture Foundation and promised unfettered access to limited or private locations. The festival doubles as a primer in cutting-edge elevator design. Thanks in part to the super handy mobile-friendly website, our Open House Chicago was a damp but fulfilling one.

Umbrellas and guides in hand, we set out Saturday morning to wait in long lines with old white people in order to gain varying levels of access to historic buildings. First stop was the Foundation Room at the House of Blues, where we were NOT expecting to encounter a collection featuring 700+ works of outsider art. A different source of excitement: FREE ROLLS! The private, top-floor club consists of a speakeasy lounge with 3 altars devoted to different deities. Outsider art, carbohydrates, and religious tolerance… the day was off to an exciting start.

Next we visited Google, Inc. The line was long but the experience was worth the wait. The office (which does not allow photographs) is truly the office of the future, featuring standing desks, Herman Miller furniture, health food lounges, a tech-help desk and another speakeasy (so hot right now). Also of note was a series of beautiful Chicago-themed contemporary works by local artists.

The Kempler, open to the public for the first time since 1972, was the highlight of the day. Two rides in a packed lift get you up to a spectacular 360 degree view of downtown Chicago. The Bean becomes a shiny silver pebble and the view of the adjacent forty-story Jewelers Building, with its unique spires and cupolas, is close up and spectacular.

We ventured on to the Gensler architecture firm, which is housed close to SAIC on the third floor of the Sullivan Center. Erin was distracted from the beauty of the space by the beauty of our tour guide. The space was used to house the Carson Pirie Scott & Co. women’s shoe department. As a nod to this history the space around the elevator bays is dedicated to small shoe display shelves. The firm has worked to keep many original features of the building (Sullivan’s plaster casts, an original billboard) while integrating modern office design aspects. The sandblasted elevator doors reveal layers with years and years of colorful paints. Gensler’s floor also included a partially exposed CPS&Co. painted sign on an interior brick wall; a gem discovered during remodeling that lends some soul and spirit to an ultra-contemporary architecture studio.

Sorry, Gensler, but the best elevator award goes to the Art Nouveau patterned mirrors that line the vertical chambers at theWit Hotel. Another pleasure of theWit Hotel was their screening theater, creatively called SCREEN, with Lay-Z-Boy chairs that go horizontal at the press of a button. However, the 27th floor bar wasn’t open when we got there at 1:30pm. BOOOOOOO.

We couldn’t resist the allure of the Prairie Avenue mansions, which were, sadly, all lacking in elevators. The mansions between 19th and 21st street on S. Prairie Avenue were the result of Chicago’s booming retail industries during the late 1880’s. The Clark House Museum, the oldest standing structure in Chicago, hosted a family day with period actors (aka LARPERS), food, games, and music. Down the street the folks at the Keith House thought it was a good idea to put a boom box with a tape deck in their period dining room. Both the Keith House and The Wheeler Mansion now exist as B&B or rental venues; thus, they have been stripped of all charm. The commercial feel ruined the aura.

The elevators at the University of Chicago’s brand new Logan Center for the Arts were extremely slow, so we took the stairs. The Logan Center is a high-rise for the arts, towering over everything in the landscape on the midway. The recent success of the Hyde Park Jazz Festival and the related programming hosted at the Logan Center have already made the space busy with activities. While it is not close to public transit, the music events, artist studios and galleries will be a draw in the future.

Chicago has a love/hate relationship with its architectural heritage, and OHC is on the love side at its best. This contrasts with the current show at the Graham Foundation, The Lost Vanguard: Soviet Modernist Architecture, 1922-32 on view thru February 16th of next year. The show chronicles Soviet architecture after the Revolution of 1917 with photographs of now-dilapidated Modernist masterpieces and images of structures that are no longer standing.

If you want more Chicago architectural fun check out the Art Institute of Chicago’s Building: Inside Studio Gang Architects, thru February 24. Studio Gang Architects is one of the most renowned studios in the country. The exhibition, designed to resemble an architectural workshop, promises a look behind the steel of some wonderful creations. And let us know what you think of the elevators over at the Art Institute. 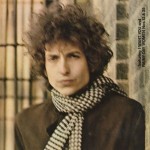