An Evening with Chris Ware 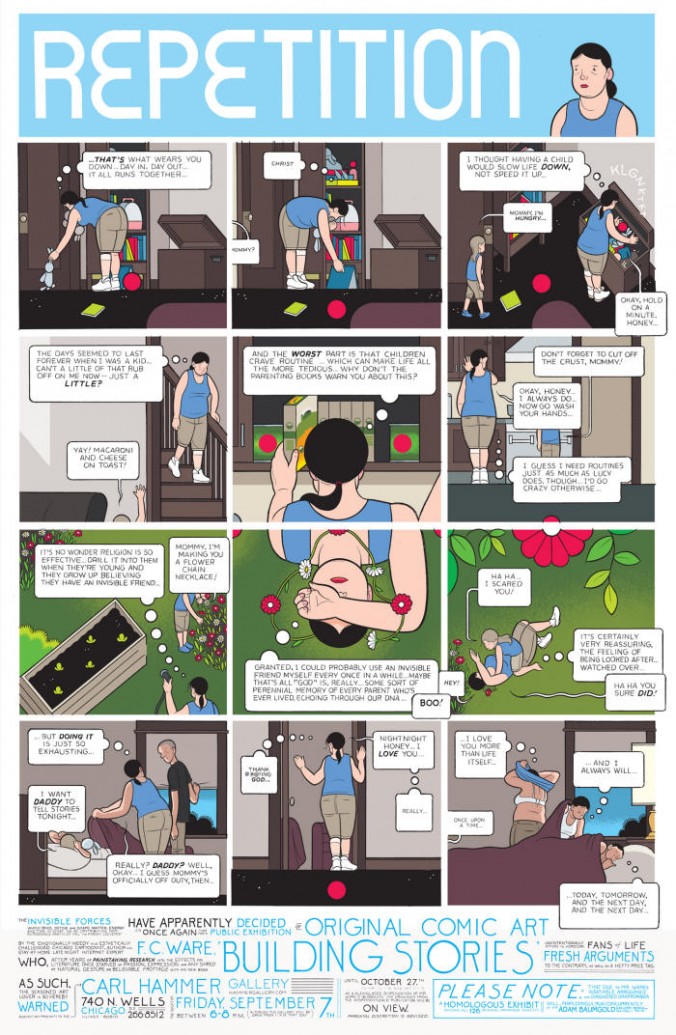 courtesy of the Carl Hammer Gallery.

“This is going to be one of those ‘scared straight’ things,” teased graphic novelist Chris Ware, after asking how many of the attendees of his October 16 lecture at the School of the Art Institute of Chicago were cartoonists. Ware himself is a former SAIC student who has earned international acclaim through his dense, poignant stories of life, relationships and the mundane, as well as for his regular illustrative contributions to the New Yorker. His school appearance was a rare one, said Yolanda Farias, manager of Carl Hammer Gallery, which is currently exhibiting Ware’s work. “You heard him lecture?” she asked, awestruck. “He says ‘no’ to everything.” Her comment seemed to agree retroactively with one of Ware’s first statements to the crowd at SAIC’s Columbus Auditorium: “Cartoonists aren’t built for this kind of thing.” Yet despite the artist’s introversion, he charmed the eager audience with his soft-spoken cleverness and dark, dry wit, guiding them through the ups and downs, authenticities and falsehoods of his body of work, candidly sharing how he embraced his true voice along the way.The lecture opened with an image of Ware as a small boy, proudly sporting a superhero cape. While in his comics-engulfed childhood he wanted to be a superhero, he eventually deemed “artist” to be the next best thing. He named “Peanuts” creator Charles Schulz as an early influence, stating that Schulz created “the first comic characters through which you can feel emotion.”

While attending the University of Texas at Austin, Ware was invited by Art Spiegelman, author of the critically-acclaimed “Maus,” to contribute to his anthology publication RAW. By the time he was working toward a secondary degree at SAIC, however, Ware was unsure of where his practice would fit into the canon. “I thought art was something that had already happened, but that didn’t happen anymore,” he explained.

A cartoonist at heart, Ware began to feel out of place in an art school that favored the conceptual over the representational. “If you spoke directly to the viewer in an image, you weren’t an artist; you were an illustrator,” remembered Ware. “Being called an illustrator was the worst thing you could be called, like being called a murderer or something.” But any avoidance of representation in Ware’s work seemed to be denying the inevitable. Of the images Ware shared from this period, one was a multimedia installation centered around a portrait, and most included saturated colors and cartoon figures. Ware also began constructing his own toys and action figures based on American archetypes.

Ware found solace drawing weekly strips for New City, refreshing because “they said what they meant,” he explained. It was in this outlet that he first began “Jimmy Corrigan, the Smartest Kid on Earth,” a story that tracks generational parallels of a family in 1983 and 1893 (specifically during the Chicago World’s Columbian Exposition), all while framing the story of a middle-aged man meeting his father for the first time. The independent publisher Fantagraphics offered to publish the comic, and soon “Jimmy Corrigan” and more of Ware’s stories were serialized under the Fantagraphics title “Acme Novelty Library.” Ware was floored by this opportunity to make a living through his comics, he remembered, expecting a life as merely “the weird guy in the bookstore.” 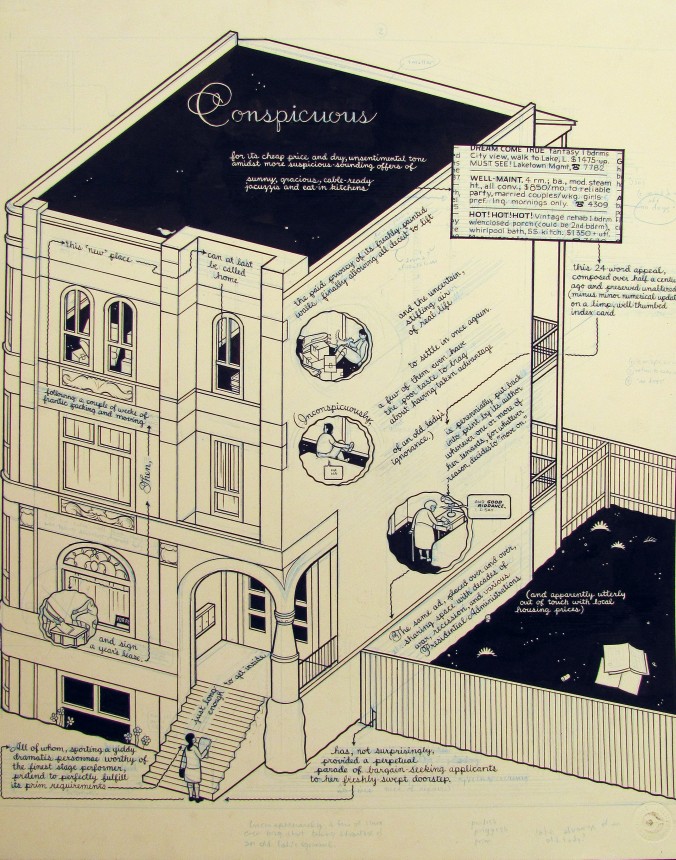 Courtesy of the Carl Hammer Gallery.

Ware explained that he likes to incorporate “momentos”; his collages of flashbacks are often scattered with sentimental objects. “We empathize not only with people but with physical objects,” said Ware. Some pages feature large, central faces or figures, with panels — like thoughts — dancing around them, authentically portraying the process of contemplation.

Ware’s most recent release, “Building Stories” is built off of a collection of stories originally serialized in New York Times Magazine. The stories center around the lives and heartaches of the tenants of a Chicago apartment building. They were partially inspired by Ware’s grandmother’s (also a storyteller) wish that he “draw about the inconsequential things in life.” Like “Jimmy Corrigan,” the stories move through time and find parallels between generations, telling the story in present perfect tense. Inspired by vintage game sets, the book is a sculpture of sorts, a boxed set bursting with character-related tidbits, pamphlets, and even a large, extraordinarily-detailed boardgame-style fold-out of key scenes that surround the three-flat.

The architecture enveloping his characters plays a significant role in Ware’s stories, at times the building even acts as an omniscient narrator. “Maybe there’s a reason we build buildings the way we do. Maybe it’s a reflection of how we we remember things…,” explained Ware in response to a lecture guest’s question about his innate architectural sensibility. “I tend to draw rooms the way we remember them, not the way we see them.”

At the request of another guest, Ware went over his process and materials: Strathford Bristol, blue drafting pencil, and Dr. Martin’s black ink. Ware’s current Chicago exhibition, in its final days at Carl Hammer Gallery, provides further insight into the way the artist works. The show features a room full of Ware’s originals that were published in the New York Times, The New Yorker or “Building Stories”. In light of Ware’s painstaking detached style, it’s refreshing (and humanizing) to see tiny drips of White Out, abandoned pencil lines, shifted panels, and notes like “move up,” and “fix hair.” But the black and white pieces (Ware colors them digitally for print) still showcase Ware’s perfect ellipses and incredibly smooth line quality and are, in most ways, nearly as immaculate as the final, published versions. The exhibit also displays the complete “Building Stories” set and all of its included ephemera, along with a limited-edition model of the book’s building (packaged versions are for sale at the gallery) constructed by Ware himself.

Ware explained in the lecture how he cherishes the relationship with readers that graphic novels afford, noting his frustration at the idea of “making work I’d never see again” that would end up “in the hands of a rich collector.” And mass production seems the most suitable solution for an artistic practice so heavily focused on the bittersweet struggles of everyday life. “There’s such a prejudice against any artwork, or anything, that’s reproduced in our culture,” Ware observed, “even though that’s how most of us have our major aesthetic experiences.” The fact that Ware has, for the last 10 years, kept a just-as-meticulously-rendered diary of his family life (“I’m keeping it for my daughter’s sake,” he told the audience near the end of the lecture, sharing a page on the projector) once again validates the medium’s endless potential to accurately archive the human experience, both fiction and non. “I want the stories to be as visually as clear and understandable as text on a page,” concluded Ware, “But I also want the stories to be as uncertain and confused as I find the experience of life to be.”

News An Evening with Chris Ware 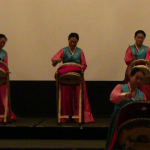