The intrepid artist weighs in on balloons, generative processes and his recent commission by Beck’s. 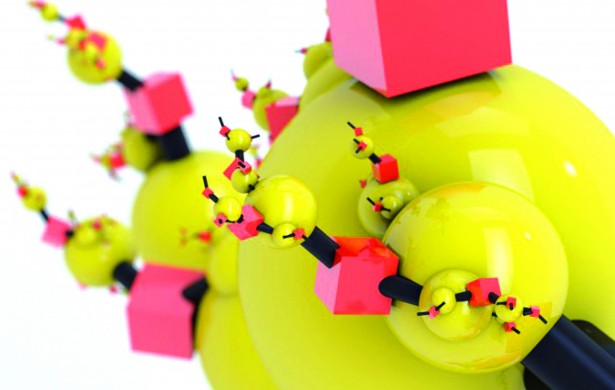 You may have heard of Willy Chyr (pronounced “cheer”) without even knowing it. Maybe you’ve seen his playful balloon sculptures on Gizmodo.com or read about his crowd-sourced novel in TIME magazine. Remember the much talked about “Always” ad featuring a maxi pad with a drop of blood on it? Yep, that’s him too. If you haven’t seen Chyr’s work yet, you will soon, because his balloon sculptures are about to be featured on Beck’s beer bottle labels for the upcoming advertising campaign “Live Beyond the Labels.”

I met Chyr for coffee at New Wave on Milwaukee Avenue. With his thick, black-rimmed glasses, he fit seamlessly in the crowd of young creatives hunched over their laptops. As we sat down to chat about his balloon sculptures (which take the shape of anything from jellyfish to neurons), the generative process and the commercially driven art market, I was impressed by how articulate and down-to-earth he was about his rapid success. In three short years from receiving a bachelor’s degree in physics and economics from University of Chicago, he has garnered nationwide press, received international design awards and been commissioned to design for Beck’s and AOL and — did I mention? — he’s never taken an art class.

Beck’s beer approached Chyr to design a limited edition art label, joining the ranks of M.I.A., Jeff Koons, Yoko Ono, Andy Warhol and Damien Hirst. It’s a little tragic when a corporate ad campaign embodies the artistic spirit but it’s no accident that Beck’s stumbled upon an interdisciplinary artist like Chyr for “Live Beyond the Labels.”

Chyr began creating his exuberant balloon sculptures after joining Le Vorris & Vox Circus while at The University of Chicago. There he learned the art of balloon twisting and began to create structures that mimicked different biological systems. Over time Chyr’s work evolved from representational forms to forms derived from generative processes. Although Chyr’s sculptures are no longer of specific life forms, his signature brightly colored orbs and complex webbing still carry the authority of a scientific diagram. “I feel that in the beginning I was trying to replicate objects,” Chyr explains to F Newsmagazine. “Here I’m trying to replicate processes. Instead of trying to make a tree, I think about how a tree grows and try to grow the balloons that way.”

Generative processes take many forms in Chyr’s work. If you visit his blog, you will find animations developed by programming various algorithms to create fractal patterns. Frustrated by how discussion of his work stopped at “Oh, cool, balloons!” Chyr became interested in programming. “I did a lot of programming to test out algorithms. You can set up your rules and have the computer repeat it 1000 times in a second. This allows you to immediately see how changing initial parameters can lead to a completely
different results.” 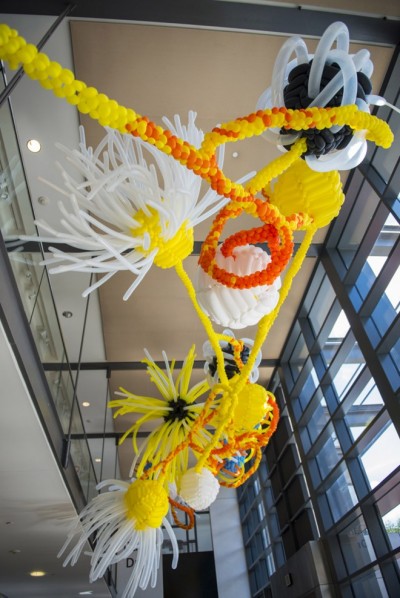 The artist’s experience programming animations not only informed his balloon sculptures, but also inspired “The Collaborwriters,” a crowd-sourced novel authored by Internet users. Written one line at a time, participants submitted sentences 140 characters or less and voted to decide which sentence to publish. “With the Collaborwriters I was thinking how it is possible to get billions of people to write a book together. How can you set up a mechanism of interaction within a crowd to create something bigger than individual submissions? Maybe this book isn’t a good one, but the rules are what is interesting.”

Although Chyr’s crowd-sourced novel and images of his balloon sculptures have been published in a host of online and print publications, when Beck’s contacted him to design for the ad campaign, it came as a surprise. “I thought it was too good to be true — up until March, when they sent me the sample bottles, I thought it was a scam.”

Although this was only the second time Chyr has done a corporate commission (the first was for AOL), he had already made a splash in the advertising world as an intern for the notorious Chicago ad agency Leo Burnett. There he created an award-winning feminine hygiene ad for “Always” and made international news as the first to ever feature blood.

“I made the ad and showed it to the creative director of “Always”, who rejected it, but along the way someone showed my ad to chief creative officer. They said, ‘This [is] good. We’re going to make it.’ I thought for sure they would offer me a job, but being 22 at the time, I wasn’t aware of office politics. I had managed to piss off just about everyone besides the CCO. When I left two days later, they sold the ad to the client. I was credited as art director, but didn’t make a single penny. The design went on to win all these awards and I was unemployed for six months.”

When asked about how he felt about a corporation using his art work as a branding strategy, he responded: “I think that in the larger scope, like it or not, large corporations have become the new Medicis, supporting the arts. I think that if they approach it the right way it is a great platform for the artist to gain exposure without sacrificing artistic vision. … The bigger question is, Does it ruin the purity of your art form? At the end of the day, it is an industry. If I only showed in galleries, it would probably still be Beck’s buying my work; it would just be the CEO of Beck’s, because it’s the CEO who has the money to go to the gallery.”

However, now that Chyr’s work is on a beer label, we can all be collectors of his otherwise ephemeral balloon sculptures. Reflecting on the role of advertising in the context of the pop art, he mused: “Lichtenstein took comics and brought them into art, but I think the reverse also happened, where art found its way into advertising.” 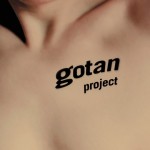 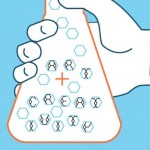 One Response to Willy Chyr