Robert and Beckwith worked closely over the last year to develop an understanding, not only of each other, but also of how the artist’s work could develop new meanings for its installation at the MCA. 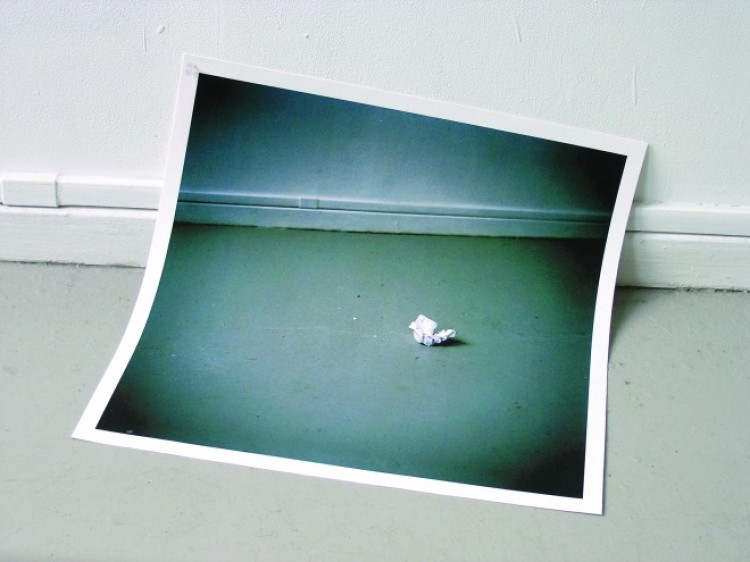 “One of the reasons I was really interested in working with Jimmy Robert is because I see him working in new directions in conceptualism,” Naomi Beckwith, curator of the Museum of Contemporary Art, told F Newsmagazine. “It was important for me to bring someone to the MCA who I thought was trying to innovate with a certain type of art practice,” she explained. French-born, Brussels-based artist Jimmy Robert’s solo show, “Vis-à-vis,” is showing at the museum through November 25.

Robert’s practice draws much inspiration from art history, but he also seeks to put the audience into a reflective state of mind, rather than into the usual confrontational position of viewing contemporary art. “One of the tragic comedies of identity politics is that everyone wanted to be dictated to. What is blackness? What is womanness? What is queerness? And Jimmy’s not interested in answering these questions,” explained Beckwith, “but more interested in responding with ‘What does it mean for you to deal with difference?’ How do we, as human beings with feelings and desires, work beyond that?” For Robert, there is no real answer, only the hope that the questions get raised and considered.

Robert is infatuated with the ideas of potentiality and ephemerality. Much of the work is figurative but presented in a non-traditional manner. Many of the photos and scanned collages are printed on heavy-duty paper and pinned to the wall, but only at the top corners. This encourages the two-dimensional images to curl outward and invade the space of the gallery. The audience has to make decisions about how to interact with the pieces. Should we stand far away or get up close and try to steal a glimpse of the back, looking for some new signs of what the image is telling us? Of course, the artist’s intentions are more conceptual than physical: If you want to touch the art, go ahead, but the consequences are the same as they’ve always been.

“Untitled,” is a large-scale black and white photograph of Robert’s brother, shirtless and leaning forward, frozen as if reaching for something on the gallery floor in front of him. In this instance the image isn’t attached to the wall with anything; rather, it’s held in place by a slab of MDF board. Robert has created a strange spatial dichotomy wherein the 2D photograph rolls off of the wall while the MDF fixes its space in the gallery. Since the photo curls forward over the MDF, the viewer struggles to engage with the image. As time passes the image becomes harder to see as the paper rolls in on itself. 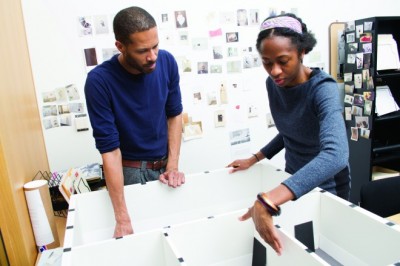 “How do we re-imagine what our bodies do in the space and not just what our minds want to do in the space?” offers Beckwith when challenged with some of the formal decisions made by the artist. “There’s a smart conceptualism here that’s very classically language-based. But there’s also the affect base that’s thinking about our bodies, feelings and emotions — how can we bring those together in the space and with what practices?” Through his art, Robert expresses wishes for all of the above to work in harmony. Some tough decisions needed to be made concerning how to bring those questions into the gallery.

The entire exhibit can be considered experimental from a curatorial standpoint. Robert and Beckwith worked closely over the last year to develop an understanding, not only of each other, but also of how the artist’s work could develop new meanings for its installation at the MCA. They made collaborative decisions about which pieces to exhibit and how to exhibit them. Even those familiar with Robert’s work should be able to walk away with some new considerations.

The installation piece, “Non-Scene,” dominates one gallery with its gargantuan, bare MDF platform and attached slab walls reaching toward the ceiling. One slab struggles to declare something to the viewer through mostly rubbed out, incoherent scribbles that are ultimately illegible. On the stage platform, we learn exactly how these black-charcoal-miscommunications came into being. On a TV, a man in tight, black leather pants and high heels draws, erases and smudges the dark thread of writing while another man babbles about life. A large photo-collage of drapery and semi-visible draped figures spills from the far ‘wall’ onto the platform with the TV, furthering the notion of miscommunicative language.

Distinctive concerns in each visitor to “Vis-à-vis” arise based on the attraction to — or repulsion by — what is experienced in the exhibit, and curiosities ultimately develop based on those reactions. The exhibit captures attention and holds it long enough for considerations to be made on why we act the way we do (perform), in a specific space (filled with potential) and under certain circumstances (challenged both physically and mentally). 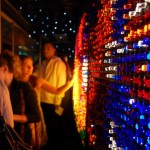