Pushing the Limits of Photography at the MOCP 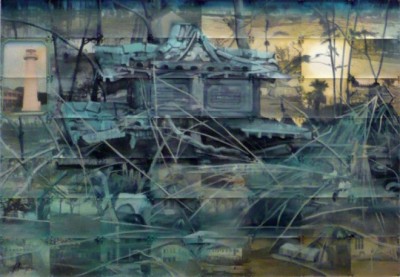 I thought that photography was supposed to kill painting, at least that’s what was said when it was just taking its first infant steps — something which has been proven wrong time and again. I saw a fantastic example of this was when I strolled into the Museum of Contemporary Photography recently to check out the “Limits of Photography” group exhibition that runs through March 25th. Photography and painting co-exist quite happily here; the curatorial philosophy of the show is either to push the very limits of photography itself or expound upon the points in which viewers lose their faith in the photographic image. 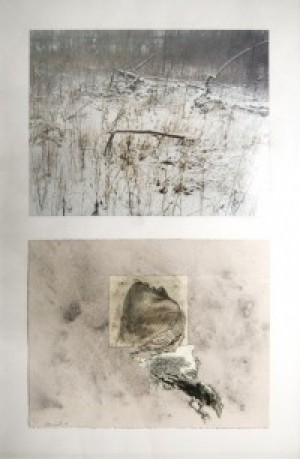 Walking into the first floor gallery on the Columbia College campus, the first images to appeal to me were two huge paintings of green-and-earth-tone traditional Japanese dwellings. Abstracted and textural from a distance, closer inspection reveals 56 separate panels thumb tacked together. Each panel depicts architectural units in any number of stages of decay. Randy Hayes describes his working process as having developed after visiting New Orleans in the aftermath of Hurricane Katrina. The Japanese structures varnished in acrylic washes incite a push-pull feeling between painting and photography.

Occupying the same gallery are the deftly constructed surreal digital manipulations of Rhona Shand. Her photo “Rapunzel” constructs imagery from an aging house with a somewhat impossibly located window with outstretched hands glued to the panes, perhaps begging for escape, a half-occupied clothesline in front of the structure rounds out the composition. I appreciate the grittiness of Shand’s storytelling creations. Across the room, her “Pretty as a Picture,” depicts a grungy, blonde pixie-haired female feeding on something. A hand enters the frame from the bottom, offering the ambiguous meal to the glowing-eyed figure. The image is enclosed within multiple frames hung at forehead height by string and nail, completing the perplexing, slightly eroticized and captivating imagery. 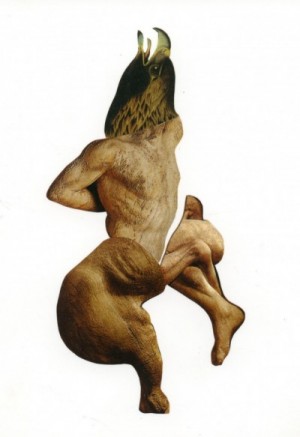 Doug Stapleton, “Untitled.” Image courtesy of MOCP and the artist.

Working my way through the show, I’m pleasantly surprised to stumble upon the diptych creations of German artist Vera Klement. Pitting intricate drawn-painting-collages against lavishly detailed photographs, Klement juxtaposes the figural with the abstract, creating thought provoking accounts. Her work begs a cause and effect comparison of the everyday, found natural objects to the cerebral and physiological workings of the human body. “War Monody (Autumn),” pairs a richly colored chromogenic print of branches, sticks, logs and turning leaves with a graphite and oil drawing of a female head. Hair and headdress mimic logs and branches while the colors of the face imitate the brightly hued fall scenery shown in the photograph. Effectively fascinating, the work continues with several more diptychs that strike my fancy.

Only mentioning a few of the ten artists, I feel the show works on an ideological level and the presented images produce a harmonious conglomeration of mixed media that encase the underlying theme of the show. Other standouts include: Daniel Hojnacki’s watercolor, inkjet and scotch tape compositions of houseplants; John Brill’s shadowy and chiaroscuro alternative process images on the second floor; and the surreal mixed collage works of Doug Stapleton. For me, the show might not have completely nailed down what the limits of photography are (or will be) as much as it defined how photography has become a necessary tool in many artists’ palettes since it’s acceptance as a viable fine art medium during the 1960’s & 70’s.

Uncategorized Pushing the Limits of Photography at the MOCP
« Previous Story 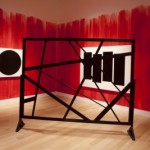 The Closing of the Inaugural Re: Chicago at DePaul... 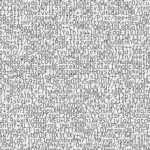