“The Language of Less (Then and Now)” at the Museum of Contemporary Art. 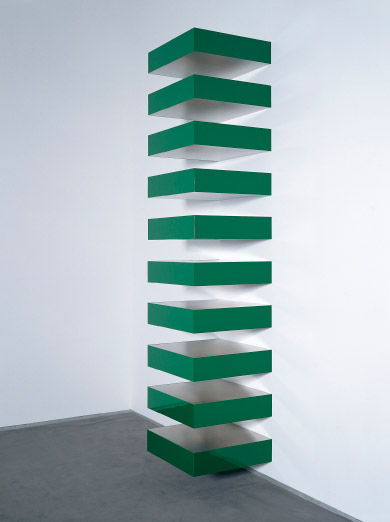 Artists frequently look to past periods for inspiration and these days certain mid-20th century styles seem particularly resonant. While many young artists seem smitten with the material excess of Abstract Expressionism and Neo-Dada, just as many take cues from what succeeded those movements: Minimalism. Perhaps the resurgence of Minimalism has to do with a reaction against the large, bombastic, conceptually-bereft painting and sculpture that was prevalent in the mid-aughts, and how so much of that art was mere commodity.

Whether the medium is painting, sculpture, drawing, or even photography, the works in many contemporary gallery exhibitions bear traits that owe much to the movement’s ethos, for instance, industrial and/or quotidian materials used in blunt ways, an emphasis on basic structures and simple geometric forms, chromatic restraint, and a cool, depersonalized tenor. The MCA’s “The Language of Less (Then and Now)” explores the significance of Minimalism from both a historical and contemporary perspective, and while the curatorial premise is solid, the resulting exhibition is uneven.

As the title implies, the exhibition is divided into two sections, “Then” and “Now.” The former is comprised entirely of works from the MCA’s permanent collection, featuring the usual suspects, lesser known kindred spirits and significant precursors. Taking a cue from some of the works presented, it’s divided into four separate, but interrelated parts, each comprised by a group of works in one of four galleries arranged thematically. The first, “Building Blocks,” showcases seminal geometric abstract paintings by the likes of Josef Albers, Ad Reinhardt and Frank Stella, works that proved to be highly influential to Minimalism proper. From this gallery alone, one can already see just how many gems the MCA has in its collection, but it may be too much of a good thing. The room feels cluttered, and some works negatively affect one another by dint of proximity. For example, a dichromatic painting by Blinky Palermo (which uses store-bought dyed fabric as a ready-made material) looks surprisingly lackluster when viewed near a lustrous Brice Marden work that shares a similar compositional structure.

The room feels cluttered, and
some works negatively affect
one another by dint of proximity.

The problem of excessive quantity continues into the adjacent gallery. Grouped under the title “Dimensions of Space,” it showcases canonical works by artists central to the Minimalist legacy: Donald Judd, Carl Andre and Dan Flavin, as well as related figures like Richard Serra and Bruce Nauman. But the abundance of work prevents much of it from functioning in accordance with the radicality of its initial premise, which was to activate the surrounding space and make the viewer aware of how any single viewing position and spatial perspective shapes the work’s meaning. In this context, each piece becomes a discrete object, and those dreaded A-words that most of these artists tried to eradicate from their work – authorship, aura, absorption – are somehow restored. 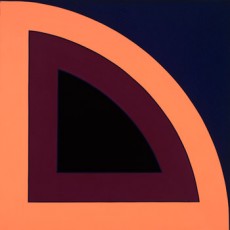 The remaining two rooms are smaller in size, and feature both better installations and more unexpected work. In “Measuring and Limits,” the works shine, precisely because they are so disparate. An early Robert Ryman adorns one wall, in which earth tone flecks peek through a sumptuous white surface. On the opposite wall, a pristine Jo Baer is situated near a surprisingly dainty quadriptych by Daniel Buren. A third wall displays a Frank Stella from the late ’60s, in which a rigorous formal composition is considerably enlivened by a palette of deep ultramarine, lamp black, burgundy and neon orange ­– colors ubiquitous in so much contemporary painting.

Less chromatically vibrant but no less engaging are the works collected in the fourth and final room, “Open Systems,” most of which were made by artists deserving greater recognition. Tony Conrad’s “Yellow Movie” is also worth mentioning. A large painting on paper, it features a black frame painted on a faintly yellow ground. Conrad deliberately chose paint with special chemical properties that will cause it to gradually yellow over time – a sly, yet effective way to truly activate the picture plane.

Given the sheer number of works in the “Then” section, one could be forgiven for expecting an equally large, if not larger, array of works in the “Now.” After all, wouldn’t the most effective way to foreground Minimalism’s enduring legacy and influence be to show just how many young contemporary artist are inspired by it? Strangely, only five contemporary artists are showcased and none are painters – a puzzling curatorial decision, given that a majority of works in the first section are paintings. (It’d be interesting to see how the legacy of Minimalist painting is addressed in the works of contemporary painters like, say, Richard Aldrich, Wade Guyton or Dan Walsh, just to name a few.) Instead, all of the artists presented – Carol Bove, Oscar Tuazon, Jason Dodge, Leonor Antunes and Gedi Sibony – work in sculpture and/or installation. Although each has a singular, formal vocabulary and conceptual set of interests, the consistency in medium creates a vague monotony when contrasted with the first part of the exhibition.

However, the one benefit to such a small number of artists is that each is granted an entire gallery in which to create a specific installation. Thus, the vast amount of dark space surrounding Tuazon’s “I Gave My Name to It,” serves to heighten the sculpture’s psychological charge. In this work, a large, three-bulb fluorescent light fixture lies bulb-side down on the floor, so that only a small puddle of light radiates out from it. The effect is forlorn, like a melancholic take on Flavin.

Empty gallery space is also deftly activated in the works by Dodge and Sibony. Together with Bove and Antunes, these artists demonstrate how relevant the ethos of Minimalism is to their respective practices. But one wishes that more of their contemporaries were included, and that specific connections were established between the artists from “then” and the artists from “now.” As it stands, “The Language of Less” feels like a strange composite of two separate exhibitions. Cumulatively, it still offers a lot, but it could have offered a whole lot more. 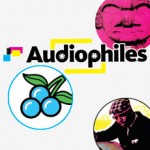 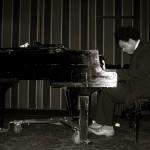