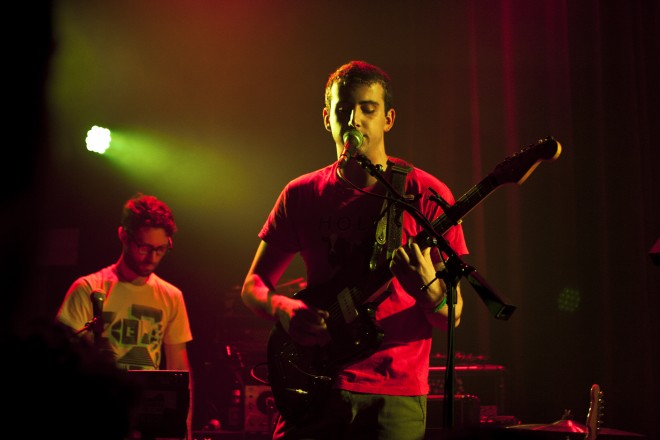 Indie rockers Cymbals Eat Guitars were first thrust into the spotlight with their self-released 2009 debut Why There Are Mountains. The project started when high school friends Joe D’Agostino (vocals, guitar) and Matthew Miller (drums) found musicians through Craigslist, got together and recorded an album — one that was then recognized as “Best New Music” on Pitchfork and continued to gain buzz very quickly. Not anticipating the immediate attention, D’Agostino and Miller initially struggled with touring but soon found a line-up that worked, with bassist Matt Whipple and keyboardist Brian Hamilton. In their most recent release, Lenses Alien, the band’s maturation is audible. F Newsmagazine’s Becky Frass sat down with bassist Matt Whipple and drummer Matt Miller before they opened for Cursive at Lincoln Hall last Sunday to talk about the production of Lenses Alien, cat videos and plans for the immediate future.

Becky Frass: What was it like when Why There Are Mountains first blew up, and what was the reaction to that immediate fame?

Matt Whipple: Well, I wasn’t around for the immediate reaction…

Matt Miller: But he was kind of the solution to the immediate reaction, one of them anyway. It was just Joe and I, and we had recorded it with some band members we had originally found off of Craigslist. That got us through what we needed but then we started getting shows and we couldn’t play well at all. We were pretty terrible.

MW: It was a classic case of a band not being ready to be thrust into the spotlight, at least based on the live show. The band wasn’t really together yet — the record was out but the band was still sort of forming. So it was kind of crazy. We played catch-up for a year and a half.

BF: So you’ve just started touring with Cursive. What’s this like compared to previous tours?

MW: We don’t really have a sense of what it’s going to be like yet. There’s definitely a strong family vibe because both Cursive and Conduits, the other bands we’re on tour with, are from Omaha. It really seems like everybody in both bands has sort of known each other for quite some time now, and we’re sort of like the middle band who doesn’t really know anybody yet. Still, everybody has been really friendly and welcoming, just like most tours we have been on.

MM: It’s great too, because they have a very large fan-base and we’re getting to play lots of areas we’ve never played before. We’ve played a lot of places before, but it’s cool that this time we get to finally change it up a little bit and go to some fun new places. Well, hopefully fun.

BF: Lenses Alien was the first record officially released on a label. What was the difference recording with a label as opposed to recording independently?

MW: There wasn’t really much label involvement other then behind the scenes logistical stuff. We didn’t submit demos to them — we basically just submitted them a finished record once we were done recording. So I imagine it wasn’t that different from recording the first album. I mean, it was the four of us doing it together, which was remarkably different, but…

MM: It was nice being able to work with [producer] John Agnello as well — that made it a whole different kind of process. He definitely sped up the learning curve.

BF: With all of the changes and expectations after the success the first album, what was the difference in the writing and development process of Lenses Alien?

MM: The first record was mostly like a bedroom project of [singer and guitarist] Joe D’Agostino, and with very little structural or melodic input from anybody else. This time it was everybody — we all wrote the songs together and there wasn’t anything pre-written years prior to recording or anything, this was all done with the band.

MW: Yeah, everybody has their job to write their part on their instrument. Then above and beyond that, everybody is sort of welcome to throw out changes to parts, changes to melodies or structures of the song, or even to just write songs themselves and introduce an entire song structure to the band. It’s very open.

BF: So your official website is a Tumblr. What effect would you say social media has on the development of the band? Do you like being able to communicate with fans that way?

MW: It is nice to be able to have that immediate outlet to talk to fans directly when they want to ask us questions, or even just talk to us about cat videos or whatever. It’s useful to an extent, but I still think that having a publicist and having coverage from sites like Pitchfork are the best ways to get news out there. For the most part fans like you and they like your music, but with social media they’re most interested in you being funny and entertaining in that realm. If you post a new song, maybe four or five people will be like, “oh that’s great,” but if you post something like a cute dog video, 35 people will be like “oh, you guys are amazing!” [laughs]

MW: Tweeting is mostly by me, and a little bit by Joe. We haven’t really done stuff on the Tumblr. That was more of a project leading up to the record release — populating it with weird imagery that would get people thinking about what the record would be like.

MM: Yeah, it’s mostly [Matt and Joe]. Brian and I … if we find an extra funny cat video we’ll post it. [laughs]

MW: Matt tweets rarely enough that if he does, I’ll hop on right afterwards and be like, “Hey guys, that was Matt Miller!”

BF: What should we expect from you coming up? Are you playing any festivals this summer?

MW: I don’t think we have any festivals lined up, we’re kind of coming to the end of the cycle for this record. We did our headlining tour already and it went really well, we went out with Hooray for Earth supporting us and that was awesome. We went to Europe in January, and now we’re doing our “support lap” around the country. At this point we’re very wary of over-touring or doing the same thing twice on one record, so we might hold off a little bit and just sort of take a break from touring. 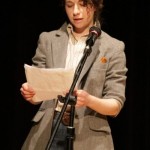 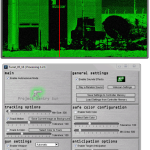 Thanks to Project Sentry Gun, You Can Now Automate...