This statement was co-authored by two members of the Occupy Chicago movement who wish to withhold their authorship in the spirit of the radically democratic nature of the Occupy movement.

“Recession”. That word has been popping up more and more since its advent in 2008. It’s a scary word, but it’s hard to deny that that’s what we are experiencing. There is an even more frightening word looming overhead though; that word is “depression”. A recession is easy to write off. It sounds manageable, we think that we can continue in our daily lives, waiting for everything to even out. But a depression calls for action. The anxiety and fear that an economic depression brings on evokes a sense of injustice and anger in everyone it touches. And we empathize.

We’re close to rock bottom. It’s not just America. The entire world can sense the eminent economic decline. If we don’t make changes now we are asking for a disaster of epic proportions destroying what little economic stability we have left.

There has never been such a large gap between the rich and the middle class as there is right now. One percent of the population controls over a third of the nation’s wealth, and most of that one percent isn’t paying taxes on that money because of antiquated loopholes leftover from previous administrations.

Don’t be afraid, intimidated, or feel hopeless. We understand. We’re scared and anxious too. And we’re here to change that for all of us. We are Occupy Chicago.

Standing in Solidarity with our brothers and sisters presently occupying Wall Street, our main concerns are directed at the role of corporations within America. By allowing corporations to grow to obscene sizes, constantly amassing more capital with minimal taxation, we have lost control of our own country. With an almost unlimited amount of wealth, it is easy for these corporations to push their personal agendas through with the help of bribes, massive campaign donations and expensive lobbyists. And it is our money that is funding it. We allow these corporations to pollute, outsource, and buy their way through laws and legal processes, with a complete disregard for their hardworking patrons and employees.

This leaves the other 99 % of us struggling to make ends meet.

That 99% is taxi drivers, teachers, fire fighters, 7-11 employees, security guards, waitresses and airline attendants, the people that keep America running. It’s students like us, struggling to stay in school while faced with the constant inflation of private student loans.

We are building a foundation for a movement: a revolution. It’s important for us to let people know that we believe in non-violent, civil disobedience as we fight for our basic human rights.

We are not a leaderless movement but a movement of leaders. 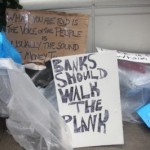