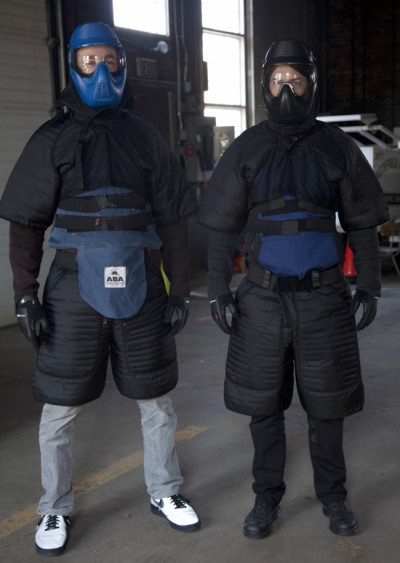 Kelsey Dalton & Andrew McClellan: What artists, historical or contemporary, have influenced your art?

Type A: We’ve definitely been influenced by the performative works of Bruce Nauman, Vito Acconci, Bill Viola, Chris Burden and Joseph Beuys. While not only the video work, it has been the video that spoke to us most directly when we began working together over 13 years ago. The focus on physical and mental endurance, the inherently masculine bent of the performance focus as well as the odd pointlessness of all of it lent our work a sense of bravado and absurdity. In addition to the art world pantheon, we focus on music (Adam: heavy metal, Andrew: punk). Once again, the hubristic absurdity of much of the subject matter and performance are key. Whether it’s Judas Priest’s hyper-masculine leather and motorcycles or The Sex Pistols‘ packaged nihilism, our young minds were warped (and not just for the better).

We also consume as much sketch comedy as we could justify when trying to make “serious” art; and the comedy was usually from duos or collaboratives. Mr. Show’s Bob Odenkirk and David Cross, Tenacious D’s Jack Black and Kyle Gass as well as the Upright Citizens Brigade were on heavy rotation at our studios. We have to stress, while absurdity and a self-reflexive humor were evident in all of the above influences, they all had a philosophy and a rigorous ethic that afforded a confidence to allow such serious ideas to be perceived of as folly (or is it the reverse?). We fed off their bravery especially when the initial response to our work was that it was funny or slight.

Type A: As a duo, we’re very much in a long-term relationship. We know each other very well and are able to perceive the variations in mood that can affect the creative process. Sometimes we try to get along and make things better. Sometimes we can’t help butting heads and creating tension. So, our ability to work together depends on anything from stress to family to health to schedule to ego. In all seriousness, we see the world very differently in many ways. We do come together on an odd mix of suspicion and idealism. We don’t trust assumptions (especially our own), and use that stance as a motivation to get people to think about what they may consider a resolved issue (as if there are any). Perhaps that’s a bit of a cynical view of society. But we balance that with an optimism that people can have positive, healthy and cathartic responses to direct experience. That and our aesthetic sensibilities mesh in a unique way.

In a more day-to-day way, we do pitch each other ideas, sometimes formally and sometimes casually. If something sticks, it gets passed along between us until it is no longer recognizable as that original idea. It becomes a third thing that has both of our fingerprints all over it.

Oh, and sometimes we actually pass an “idea ball” around.

KD & AM: What advice would you give to a collaborative (or individual) in graduate school?

Type A: Make sure it’s Columbia or Yale.

But seriously folks, use the time to indulge your creative process. While taking chances, commit to the environment. Basically, you are in school to learn from yourself and from others. Be open to ideas while defending your own. But don’t just ask questions; make statements. Most of all, create and present with generosity. Bring people in to your creative process. That captive audience won’t be there for long.

Also, don’t put to much pressure on yourself or anyone else to emerge from grad school fully formed. Sure it would be wonderful to graduate with a gallery and museum shows and a host of collectors. But that’s a rarity. In fact, that can be a pressure cooker of a situation where the cart pushes the horse. We have had time to develop our ideas and aesthetics. If all eyes were on us, we’d probably not be able to take the chances that we’ve been able to take, the risks that have been the most fulfilling part of our practice.

The Visiting Artists Program Lecture Series hosted Type A on Monday, September 26. This interview took place via e-mail prior to the lecture. For more information about future artist lectures visit www.saic.edu/vap. 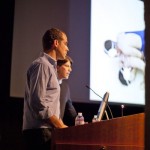 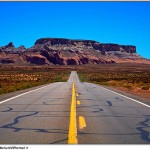