Journalist Danielle Mackey, who is currently based in San Salvador, shared some fascinating glimpses into the emerging art scene in politically tumultuous El Salvador through her three-part series. 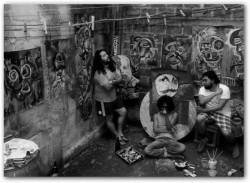 “You’re here to see the young man?” The sturdy gentleman in a tan vest with a semi-automatic slung around his shoulder asks as I walk up to the small museum’s front door. “He’ll issue you in; just a second,” he says. The name of the “young man” is Carlos Funes, and he is the owner and principal director of the museum, called Artefacto. The security detail is there because Funes also happens to be the son of the current president of El Salvador.

The guard sweeps open the tinted glass doors and I find myself flanked by another three guards, seated just inside. The museum is small — shot-gun shaped, perhaps about five meters wide and three times as long — and the main offices are in the back. It’s dimly lit in an attractive way, and a projector throws onto the back white wall a video of an acoustic performance by the popular Mexican band, Zoé. Funes exits the office in his green-brown suit and tie. I feel a bit under-dressed in my jeans and Converse, but Funes has an ear piercing. 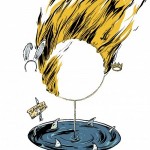