Remember the sponge-painted appliqué techniques that permeated the bedrooms of American ’90s youth?  I was pleased to find the same loud and colorful faux décor splatter the once-white walls of Roots & Culture this past Saturday at “What’s My Line?” An Anonymous Group Exhibition Organized by Justin Thomas Schaefer – although something tells me that Schaefer’s involvement with the show is slightly more than curatorial. 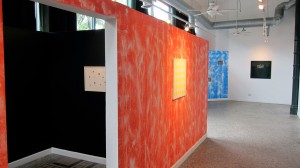 Among the bright red and blue splattered walls, there were a range of two-dimensional objects, from neon geo-paintings, to a trio of canvases delicately tiled with pressed four-leaf clovers and encased in glass. The select installation of Schaefer’s “collected” objects maintains a spare presence throughout the space, as if they were not the true focus of the show. As such, the exhibition reads more as an experiment, especially since it does not seem to adhere to any particular narrative structure. The show runs without any of the usual requirements of a gallery opening: no press release, no accreditation to any artists, and nameless work (there’s not even so much as an Untitled; the titles are simply not there). In fact, any attempt to read some kind of narrative into the show would lead to little more than a confusing void, unless of course the viewer were to consider the entire exhibition as an extension of Schaefer’s practice. 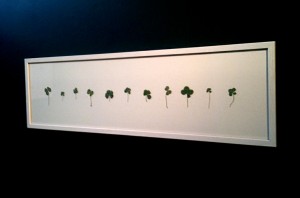 If you’re like me and you’ve seen Schaefer’s work before, it is unlikely (as the title suggests) that this show is a collaborative effort – especially given its aesthetic ties to Schaefer’s solo exhibition Practice Makes Purpose last August, 2010 at Monument 2. Borrowing its title from a 1950s game show, where panelists attempted to guess the occupation of the contestants, “What’s My Line?” is perhaps the perfect symbol for the artist’s relationship to his own work.  While not technically part of the title, the phrase “An Anonymous Group Exhibition” should be considered as well, particularly because anonymity is the only framework through which we can enter Schaefer’s work.  Although each piece employs subtle variations in the retelling of the game show, Schaefer heightens the viewer’s interactions with the objects as a collective whole by masking the “creator’s” identity.  With every piece we view, we are reminded of its anonymous context and non-specified origins.  As a result, any ability the work has to communicate with its viewer is silenced by its lack of referent. 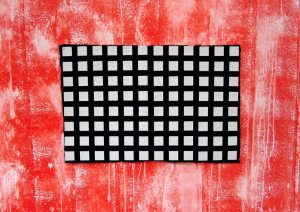 Image courtesy of Roots and Culture

What’s My Line? raises a larger riddle about Schaefer’s lack of biographical presence in the press.  The artist graduated from SAIC in 2008; was nominated as one of “40 North American Emerging Artists” that same year by the New Museum of Contemporary Art; and in 2010 had a groundbreaking solo exhibition, Comedy Comedy, at Midway Contemporary Art; but nonetheless, Schaefer’s name has remained shockingly unsearchable on the web.  And he isn’t just hard to pin down online; he’s also somewhat rootless off-line, as well, without any main home base or institutional affiliation. Schaefer is one of the few exhibiting artists I know who works without a studio.  Over the past year, he has been installing the majority of his shows directly in the gallery, going from space to space between L.A., Chicago and Minneapolis. So more than just an “anonymous exhibition,” we are faced also with a relatively anonymous artist.  But it’s uncertain exactly to what extent the average viewer will catch on to this elaborate inside joke. In the last analysis, Schaefer himself is the only contestant in this game show for one; and the audience, who was pointed in the wrong direction, is too confused to guess. 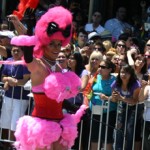 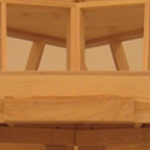