Fartbash, a spoof of the Department of Contemporary Practices’ annual exhibition, was difficult to overlook.

Failure is what inspired SAIC sophomores Zebadiah Arrington and Suh Go, to collaborate and create an alternative exhibition on campus on Apr. 15.

The exhibition, titled “Fartbash,” a spoof of the Department of Contemporary Practices’ annual exhibition ArtBash, was difficult to overlook. Blasting loud techno music from the exhibition space, Fartbash was held at the same time and location as the opening reception of Art Bash.

Arrington took the required freshman course Research Studio for the second time. Because Research Studio is a class in the Department of Contemporary Practices, Arrington’s enrollment made him eligible to submit work for ArtBash. After submitting a proposal for the Alternative Space Exhibition, Arrington experienced another failure: his work was not accepted into the show.

In response to the rejection of Arrington’s proposal, he and Go created a student-directed exhibition for the works rejected at Art Bash and any other work that students choose to submit.

In contrast to the tedious process of submitting works for ArtBash, the guidelines for Fartbash were very liberal. Students just had to show up during the installation time with any work and they had the complete freedom to install their work in whichever way they pleased.

But to ease the clean up process, Go came up with a simple paperwork portion for the students who submitted work for Fartbash. The students just had to write, “I consent to having my work get thrown away if I don’t pick it up by 9:00pm” on a piece of paper with their names signed.

Although Fartbash started off as a joke between the duo, putting the event together was a tedious process and the idea behind it had a very deep concept. They questioned the authority of institutions in setting the standards for what makes good vs. bad work, and they attempted to show failure in a positive light.

“My girlfriend made fun of me for getting rejected for ArtBash, and she had an idea to throw a show that was kind of anti-Artbash,” said Arrington. “It sounded like a fun idea to throw a show of all rejected work. You know, that’s like, Salon des Refusés. I’m really into the idea of failed work. We’ve all experienced failure at different points in our lives.”

Only a small portion of the school knew about Fartbash before the opening day. The duo wanted to keep the underground event as low-key as possible, especially from school officials.

“We wanted it to be a surprise because we knew a lot of teachers were going to Artbash,” said Arrington. “We just wanted them to stumble upon Fartbash without having them hear about it and make assumptions about it way ahead of time.”

According to Go’s records, over twenty students displayed their work at Fartbash, and all kinds of media were submitted. Fartbash mimicked the same structure of Artbash and took place within one of the critique rooms in the first floor of the Columbus building. The exhibition showcased a wide variety of work, including “photos, print media, sculptures, paintings, drawings, installation pieces, and video.”

“It was huge surprise for us,” said Go. “I was imagining lots of paintings and sculptures, but we even had a performance act in the show. My roommate was sitting in one of the corners drawing portraits of people looking at the art. In the later portion of the show, she drew faces of people and handed them out.”

The Fartbash attendees also had the opportunity to participate in an interactive piece. “We had a container full of gum and let people stick their chewed gum on the wall,” said Arrington. “You get to chew gum, look at art, and leave your mark. Being able to leave your mark is very significant and the fact that we were using gum was so rebellious to institutions, kind of like when kids stick gum under their desks at school. It’s non-archival and it’s against the way museums or galleries would allow things to happen in their space.” 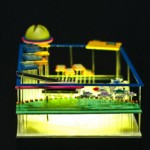 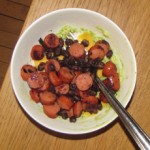