Where Are SAIC Grads Now?

It is harder to “make it” out there than it used to be, but many recent SAIC graduates have shown that it is not impossible. These young art folk are working tirelessly to forge life-paths for themselves that are both challenging and fulfilling. It may not be pretty, but even in these times, hard work really does pay off. To find out exactly how hard it is to “make it” in the real world, I caught up with four recent SAIC graduates about their latest work.

“There was a lot of hustling”, said Archey of her first year after graduation. Archey now lives in Manhattan where she is a freelance art critic and curator. Archey did a residency immediately after graduating, and from there, she moved to New York City to try and break into the scene. Fate intervened when she was hit by a car and she received a settlement. Instead of wasting the settlement money on superfluities like food or rent, Archey opened up a gallery in Manhattan’s Chinatown. She made many new contacts through the gallery, and eventually people began to come to her with writing work.

Now, after several years of barely keeping up with NYC’s high cost of living, of making risky decisions and hustling tirelessly, it is all finally beginning to pay off, “I’m just starting to make money,” said Archey, of her writing in numerous art blogs and publications including Art Info, Art In America’s online edition, Rhizome and the Chinese art magazine Leap.

When Miranda graduated last year, she realized she had to make some big decisions fast. Her first move was to return to her hometown of Miami and enjoy the summer with family and friends. “Towards the middle of the summer, I started making decisions about where I was going to be in the fall,” said Miranda. “I applied to almost every single thing I could think of. I contacted a whole bunch of professors and old bosses asking if they had any job leads that i would be qualified for.” 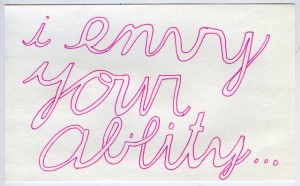 Miranda applied for work both in Miami and Chicago, but it was Chicago that proved the most promising, and so she moved back. Her first job was terrible; working in retail for minimum wage with co-workers who were all also recent college graduates. Miranda did not stop looking for more satisfying work, and it didn’t take long before she found it. Miranda had done a co-op internship at the Art Institute’s education department while in school. They offered her an independent contract to work there on weekends.

Miranda then began to think of projects that she could devote herself to while working full-time. “I’ve always been interested in curatorial and administrative work, and I decided that I wanted to start some sort of website detailing artists, specifically I wanted to feature Chicago artists,” she said. Miranda’s site, Make-space.net, is a lovingly crafted project that closely follows a small group of artists, many of whom she met while in school. The site focuses heavily on process, and even chronicles visits to artists’ studios. 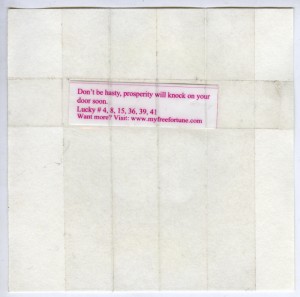 “When I got out of school I didn’t have a plan,” said Young. “Everyone’s going to be nervous right out of school unless you really have your shit together, which is really rare for students, art students especially….I was mostly worried about making ends meet, not having to move back in with my parents.”

Unlike Miranda and Archey, Young did not do any kind of professional development while he was in school. Instead, he focused single-mindedly on his art practice. ”The BFA show was a good experience,” said Young, who also showed work in a group-curated project called “Here and Elsewhere.” Because of the strength of their work at the BFA show, the group was sent to St. Louis for another show. From there they hosted a symposium in New York City on the nuts-and-bolts of being a working artist. After school, Young ran an apartment gallery in Mckinley Park for two years called Knock Knock gallery.

In 2008, Young went to grad school for education at the University of Illinois Chicago. After graduating he began working in Chicago for Teach For America and the non-profit organization Reading in Motion. Now he works in the Chicago Public Schools teaching small reading groups in the morning, and a computer literacy class in the evening. Apart from his teaching, Harley still finds time to make work. He rents a studio in Humboldt Park where he makes small sculptures and drawings. 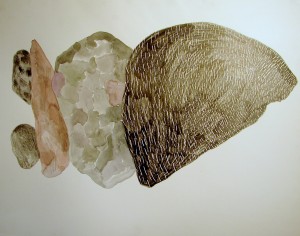 Timmerman spends most of her time at her coach house in Pilsen where she gardens, raises chickens, builds beehives and endlessly applies for jobs on her computer. “All my friends are applying for the same jobs that I’m applying for. I know it’s super-competitive right now, but I think I can make it work,” she said.

She has averaged about three job applications per day for the last six months. Timmerman has not let her involvement in Chicago’s art scene slack a bit since her graduation. She is the gallery and programming director at the Nicole Villeneuve gallery, and she still paints in her living room, which has been converted into a studio for her and her five roommates. 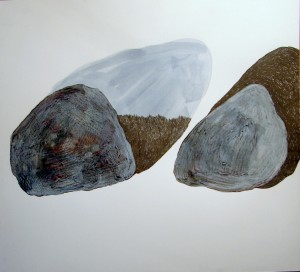 “I still make work and I’m still very much a part of the gallery scene,” she said. While she was at SAIC, Timmerman fell in love with the school’s Oxbow program in rural Michigan. After graduating she applied to work at their summer program, and just recently she was accepted. The work lasts only for several months, and after that it’s back to living the charmed life at her urban homestead and doing random part-time work to make rent. She said she’s “still kind of on the prowl for a full-time gig.” 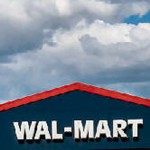 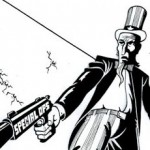