Helen Money’s live performance is at once the scholarly inventions of a trained musician and the chaotic machinations of a doom metal band.

Here’s the great thing about a cello: no matter how many pedal effects you strap onto it, it still sounds like a cello. Helen Money is aware of this sound. Despite a massive pedalboard stuffed with looping, tremolo and distortion effects, the rumbling lows and the operatic highs shined through on May 16 at the Empty Bottle.

Helen Money is the one-woman cello act of Alison Chesley, a Chicago-based musician whose training and experience lies in heavy and unsettling soundscapes. Without a trace of pretense, Money filled the stage with searing emotion, drawing her bow back and forth as if commanding a tempest. She kept herself in total control while swirling the air around her into chaos, though it was obvious that the Empty Bottle wasn’t necessarily the proper forum for a cello recital of any sort. In between songs, Money’s atmosphere was disrupted by the murmur of bar noise from the back of the house, as well as by the remaining drunken fans of the prior band to take the stage – a country rock/bluegrass combo. In short, this was not the best venue to see Helen Money. 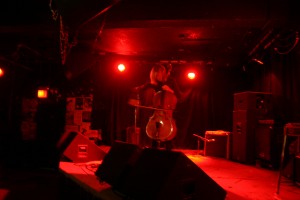 The contrast between the dual headliners actually proved useful in defining the kinds of sound Money coaxed from her hollow and upright axe. D. Charles Speer & the Helix, the other headliner, worked the house extremely hard with chugging rhythms, straightforward beats, and intertwining solos from guitar, bass, keyboards and a red-hot pedal steel guitar. All elements soared in from different directions and fused together at the middle of the stage in a flaming ball of good times. It’s the kind of music made for boot-stomping and beer-gulping. Its home is a bar like this one. 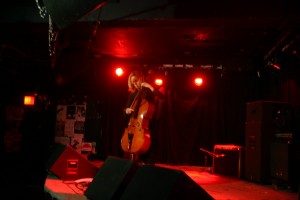 Helen Money on the other hand, was a slow-grower, beginning with an elegant phrase or two, soulfully doled out in spaced intervals. Loops began to overlap and harmonies started to emerge. Near the end of the song, Money stepped back momentarily from her creation and so did the audience. It was at this point that I saw what had been brought up around us was an entire environment of looming shadows and ageless chorus. The entire thing had been brought up from the ground, brick by brick from the workings of a single builder.

And then, Money dashed her bow against the cello, startling the audience with a terrific noise and a whole new set of echoed harmonies. Every new song had a character of its own, each different from the last and each spreading outwards like an explosion of mutated chamber music. Helen Money’s live performance is at once the scholarly inventions of a trained musician and the chaotic machinations of a doom metal band. It’s something you have to experience firsthand to fully appreciate. 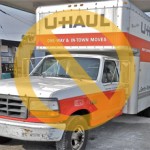