The 16th Level of State Street: It’s a Whole Different World Up There

It’s getting warmer outside, and Chicagoans have begun to break out of their winter shells. The sun has brought out suited businessmen on skateboards, marathon runners, tourists with brand new ready-for-summer cameras, children, laughter, and clothes that spent months lying in the backs of closets.

State Street has become a living creature. You look left—H&M, Urban Outfitters, Walgreens. You look right—Macy’s, Chicago Theatre, and countless other branded shops, and more significantly, people inside! The sun comes out, and people swarm like little ants, scurrying around the Loop to enjoy the city’s first sunshine.

Frolicking around State Street, however, most people don’t realize that there’s a vertical axis—apart from the skyline and the Willis Tower—but Macy’s only has seven floors, and no one goes far beyond that. It doesn’t seem like most people care much for the frivolities of the stratosphere. 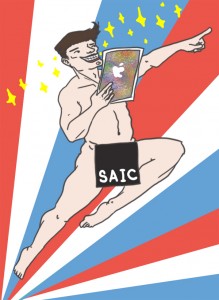 State Street’s Residence Halls go up seventeen floors, and incidentally, I live on the corner of the sixteenth. I can look down to the Chicago Theatre from my window, but if I look straight across, I find myself staring straight at the living rooms of various “real people” (AKA, not SAIC students) who reside in Chicago’s skyscraper ecosystem.

Even more specifically, I can see right into the bedroom of the guy who thinks it’s convenient to constantly strut around naked while we’re trying to eat dinner. I think he’s got someone to periodically clean his blind-less windows, because aren’t they just clear as ice. Not only is he strutting, but he’s also dancing. Naked. Waving around his iPad in a rhythmical sequence reminiscent to The White Stripe’s Seven Nation Army. While I’m eating dinner.

Oh, the happy ignorant tourists have no idea what goes on in the sixteenth level of State Street. It’s a whole different world up there, completely disconnected from the ground, where the wind blows and spirits roam free. And honestly, until these tourists experience one of Naked Man’s dancing performances, they might as well not have experienced the Loop at all. 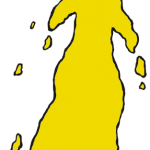 Put Some Mustard on Your Life

One Response to World Dormination: A Weekly Column