It’s 70 degrees outside, and Charlie Sheen is a torpedo. And the city is on crack. Chicago decided to give a festive welcome to everyone’s favorite nutjob. I counted five police cars, four news vans, and three trillion people.

I can’t even begin to imagine what Charlie Sheen would ramble about. Would he be funny? Would he be serious, and share some enlightening truthlets? Would he get out a guitar and sing songs about winning? Maybe he’ll show a power point presentation.

Even more intriguing are the people who actually paid roughly $80 to see him. There were lots of business-looking men (industry executives?), women who wore heels the size of Africa (Charlie’s friends?), and a few with some very insightful tee shirts. 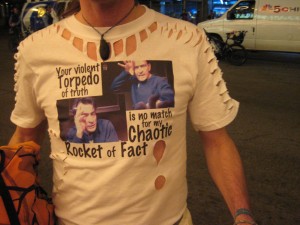 This one red-bandana clad gentleman walked around the front of the theatre like it was his playground, and seemed to know everyone around. It’s unclear whether he had a ticket for the show, or if he was just there to stand and look awesome with Charlie Sheen’s face plastered on his chest.

He explained to me, “You see, the front of my shirt represents Charlie not winning, and the back is him winning. See all those ladies around him, originally they were giving him alcohol, but I put some toothpaste on it, and now it looks like he’s drinking milk.” 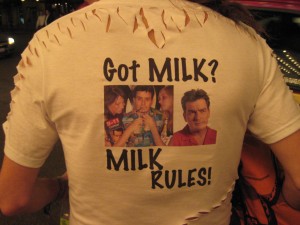 “I heard that in Detroit,” he said, “everyone was booing.” That’s unfortunate. “Yeah,” he said, “He really needs to hit rock bottom before he starts getting better again. This tour will definitely help him do that.” Would you like to help Charlie get better? “Yeah, I’d like to be his friend.”

The chaos faded as everyone either frolicked into the theatre or dispersed because of the rain – of course, Charlie Sheen would bring a storm to Chicago with him. Ticketless, and not wanting to get wet, I walked back home.

Appropriately, and with a fist in the air, I said, “WINNING!” 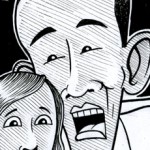