As Japan’s nuclear crisis begins to fade from major news headlines, SAIC continues their efforts to aid the Japanese people in any way they can. A Japan Relief Committee has been holding regular meetings to organize events and raise funds for the relief effort. This committee is composed of Japanese and non-Japanese students as well as representatives from Artists Without Borders, a relief organization that uses art as a form of therapy for victims of disasters.

Earlier this month, JSAIC hosted a Japanese Tea Ceremony in collaboration with the Nuveen Center for International Learning. At SAIC’s Spring Art Sale, JSAIC organized an effort in which tables accepted $1 donations in return for paper cranes that committee members hand-folded. Another Art Sale table sold artworks donated by students. The proceeds went to the Japan relief effort.

One student is organizing the “Come Together For Japan SAIC Japan Relief Effort” for May 9 in the MacLean Center Ballroom. The event, which features live bands, will donate its proceeds to a non-profit Japanese aid organization.

SAIC’s chapter of AIGA also joined the efforts by designing posters to aid in creating awareness and promoting the benefit concert. The committee is a collaboration of several facets of SAIC’s community, coming together to help the people of Japan. 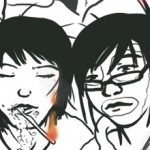