They spend the year living in their studios, and each May, the efforts of SAIC’s Fashion Design students culminate in a day-long affair of high-concept fashion. This year’s FASHION 2011 is the department’s largest event to date, including four separate fashion shows, an award ceremony for Ikram Goldman (this year’s “Legend of Fashion” honoree), and the announcement of the Eunice W. Johnson Fellowship award winner: a $25,000 prize given to a graduating senior to help them start their own fashion line. It’s a pretty big deal. And, beginning May 5 at 9 a.m., it’s just around the corner.

Last year’s FASHION was held in the Modern Wing of the Art Institute, a spectacular affair with a runway that stretched nearly the entire length of the wing. Although previous FASHIONs have been successful, there was a desire to reinvent this year’s approach, so the department has developed a runway show that hearkens back to when New York Fashion Week was held in tents at Bryant Park.

On May 5, re-purposing Chicago’s Millennium Park in this same vein, a tent will be erected and the Fashion department’s largest show to date will commence. “As always, we will integrate the same intensity into each show, only this year we are stepping it up in a much more serious arena,” explains Conrad Hamather, Fashion Design faculty and the organizer of this year’s FASHION 2011.

When it comes to producing a fashion show, aside from good clothing, the music and sponsors can be the ultimate pièces de résistance. This year, FASHION 2011 has exciting news about both. “FASHION 2011 will be presented by the design house of Swarovski,” says Hamather. In a first-time move of direct sponsor-to-designer collaboration, the design students will be provided with Swarovski products to implement into their garments. As fashion design students are responsible for purchasing the fabrics and materials they use to create their collections, this rare gift is an incredible opportunity.

While jewels may be pretty, a fashion show is nothing without a memorable soundtrack. So, also for the first time ever, the department is introducing a live, “more cohesive sound component, [DJ/sound artist] Skooby Loposky from Brooklyn, NY.” Working with the designers, Loposky will generate original content that enhances the “styled concepts” and “utilization of the body as vehicle” that Hamather cites as the founding concepts for the show.

“It’s my way of addressing, through fashion, the lack of sexuality in general American culture by acknowledging and illustrating a niche in pop culture where sexuality is celebrated,” Outarsingh told F Newsmagazine. Of course, no collection is complete without a personal touch—or the underlying desire to create your own dream wardrobe.

Like Outarsingh, senior Julia Covintree is also seeking inspiration from New York scenesters, although her concept is rooted in an examination of Jean Michel-Basquiat’s graffiti art and the hip-hop culture of the ’70s and ’80s. For junior Laura Dodd, the department’s deviation from sartorial trends is exactly what drew her to SAIC.

“Unlike the majority of American fashion schools, we are allowed to create in an uninhibited manner, that doesn’t shove current or future trends down our throats. We’re encouraged to approach design in any fashion that we may chose, whether it’s ready-to-wear or couture or in some circumstances, a hybrid of both,” said Dodd.

Both Dodd and Outarsingh worked with unconventional materials outside of typical fabric selections. Encouraging experimentation is a strength they both credit their department with. “At SAIC, I’m not just a fashion designer,” said Outarsignh. “I’m a fiber artist, a sound artist, and so on. My collection is very heavy on fabric treatments: I’m dyeing most of my fabrics, screen-printing all of my own images, and I’ve even thrown in a little crochet.”

Eliza Angell, a junior in the fashion department, designed a collection “based off the idea of sustaining relationships over time and distance.” Having moved frequently as child, her garments refer to the letters she kept throughout her travels. “The prints in my collection reference the textures, shapes, and colors of packaging and envelopes,” she said.

Ikram Goldman, who famously styled the likes of Proenza Schouler, Viktor and Rolf, and Michelle Obama, feels that being named a Legend of Fashion does not come without its unique responsibilities. “When you’re given such an award, it is really an honor that people recognize something in you that you might not even recognize in yourself,” Goldman explained. “It puts things in perspective,” she said, “here [the students] are working, making things happen, sewing the clothes, learning from the teachers, and then you meet people that you can look up to that help you to that next level.”

Helping the students get to that next level is precisely what Ikram’s internship program strives to achieve. “I’ve allowed them to come into our alterations department as interns, and spend three days in a row with us, learning certain techniques they otherwise wouldn’t learn in school,” she said.

Ikram admits that there is a gap between resources in Chicago and their utilization by the students. When questioned as to whether or not this results from a misunderstanding of SAIC’s conceptual approach to fashion, she said no, that it’s a collaborative effort that is a work-in-progress.

But what does it mean to have students producing such avant-garde work in the heart of the Midwest? Goldman’s internationally acclaimed boutique “Ikram” at 873 N Rush St in the Gold Coast neighborhood defies the notion of the Midwest as a place of fashion stagnation.

“I was always fascinated by those comments from fashion people. We’re a really hip town, we’ve just been under the radar,” Goldman said. “But I’m okay with that, because it allows us to be bigger, to have a bigger platform to showcase what we can do in the end.” 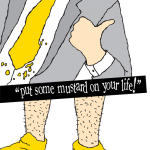 One Response to SAIC Fashion 2011