Missed the opening of the BFA show? Catch up with reviews and photo galleries.

Participating in the Spring Undergraduate Exhibition was kind of like training for the Olympics; it required massive amounts of strength, endurance, and a high level of perfectionism. Exhibiting artists certainly weren’t competing to receive gold medals or championship titles, but the work in the show made it obvious that we had all been training for this moment since our first-year classes at SAIC. And though the exhibition wasn’t juried or even formally curated, it was extremely cohesive and consistently well-presented.

The weeks leading up to the March 18th opening reception of the Spring Undergraduate Exhibition, better known around campus as simply “the BFA show,” were perhaps the most grueling and overwhelming for the participating artists, over 200 in all, myself included. The participation process began at a mandatory meeting during the last weeks of the fall 2010 semester, during which the senior class from all undergraduate departments was bombarded with deadlines, instructions, and presentations about the exhibition that was still months away.

After submitting paperwork that indicated whether we wanted to claim a space on the floor, wall, or a combination of both, we waited in anticipation of receiving a lottery number that would determine exactly where we’d install our work when the installation process began two weeks prior to the show.

The space claim that took place just a day before installation began felt like participating in some sort of game show, waiting in line for hours to hear our number called and step up to the stage to claim our prize: the space that we hoped would perfectly complement our senior projects.

For most students and staff working in the Sullivan Gallery, the week-long installation period felt chaotic and stressful, like a noisy construction site that absolutely had to be vacated by 9 pm each night and completed finished on a tight deadline. Michelle Wang, a graduating senior who participated in the exhibition, started installing her project after the initial installation period ended because the glue she used to construct Sheng Sheng, an art work that contained shards of aluminum and fur, wasn’t dry enough to be hung before the deadline.

“I got really stressed out but then I got to install after the deadline, which was actually nice because there were less people, so I got to install faster. The normal install hours were really crazy, people running around looking for tools and ladders, and it was really overwhelming. The gallery was full of people. But after the deadline, it was really nice because there was more space to work on installation. It all worked out and I’m really glad it did,” said Wang.


Participating artists Hao Ni and Kazuki Guzman, who collaborated on a project called Play.House, also faced the pressure of installation deadlines. Ni and Guzman took extra precautions in the installation of their piece to ensure that it would support the weight of hundreds of visitors who would walk through it on opening night and throughout the exhibition, ending April 6th.

Their piece, which was one of several full-scale house-like structures in the gallery, was built not only to surprise viewers, but also to test their own limits as artists. “For a long time I have been dealing with exaggerated housing structures and the surrounding imaginary world, and Kazuki on the other hand, collaborates with different artists on projects [that] he calls ‘playing’ with artists, and in this case, with his help, I got a chance to create something I could never do on my own,” said Ni via email.

The weeks of preparation and installation finally paid off on the opening night of March 18th, which felt victorious, and triumphant even. The reception was incredibly well-attended, and the line to enter Sullivan Gallery on State Street stretched an entire block along Monroe.

Emily Boksenbaum, an artist who exhibited a sculpture called We Are Trying, said, “There were so many people there that I hadn’t seen since freshman year and it was nice to see everyone come out and come together. Everyone’s pieces were really sophisticated and there was a real sense of what SAIC is about. I was pleased with the completion of everyone’s pieces. I feel like it was up to a really nice standard [opening] night. It was just really evident that everyone tried really hard and put the work in to make a good piece for the show.” 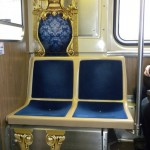