Earth Day is April 22. To help get in the spirit, Loyola University Chicago, Burners Without Borders, and the Chicago Art Department are celebrating a week early.

SAIC senior Marie Socha is one of the participating artists whose work will be exhibited as part of the week-long North Shore Earth Week event. 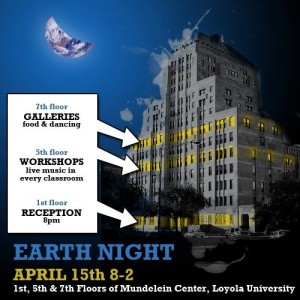 “Earth Night is an event that invites others to participate in the act of making art through workshops, installations, and music,” said Socha, who responded to an open invitation for artwork from people in the Burning Man community, college students, and people in the greater Chicago area.

Socha’s piece, called Refraction, is a meditation space that uses light and water. It was initially created for a sculpture class at SAIC called Public Light and Space. Refraction will also be on display on campus at the end of April on the 6th floor of the Michigan Building.

Stripped of The White Stripes