Check out the taste of nostalgia in Chicago’s Polish grocery stores.

The taste of nostalgia in Chicago’s Polish grocery stores

When you step inside, the first thing that hits you is the smell. That earthy, peppery, greasy smell of cured meats and sausages, mixed in with musty wood, flour and yeast — with some pickled herring thrown in for good measure. If you have Polish roots, that particular olfactory combination has a Proustian potency like no other. It immediately elicits childhood memories of being dragged to the butcher on the way home from kindergarten; bus rides with your face smashed into the grocery sack schlepped around by the old lady in front of you; and holidays at your grandmother’s. A smell with the ability to console, and to aggravate, in equal measure.

This is what the Polish grocery stores that pepper Chicago’s northwest side smell like. They aren’t just purveyors of specialty sausages and thick, bitter beers that you can’t find elsewhere; they are time capsules that contain the smells, tastes, and sounds of a former life.

Chicago became a world capital of the Polish diaspora around 1850. The first flood of immigrants arrived during a movement known as “Za Chłebem” (for bread), a desperate bid to escape the economic struggles engendered by the so-called Fourth Partition of Poland (when the fledgling nation state, finally back on its feet after disappearing from the map in the 18th century, was once again cut up and tossed to Russia and Austria in the 1830s and 1840s). Back then, the Polish communities in Chicago were organized around the major Polish parishes. But today, after the second major wave of immigration around World War II, and then yet another after 1989, the Polish community congregates around its grocery stores — the place where you can get your news, the stuff you need for Christmas dinner, or a fancy box of chocolates for a child’s first communion. Here, like most places, community is built around food. And booze.

Polish grocers proliferate in the city, but I recently visited two of the most popular, going from near to far in search of those familiar smells. 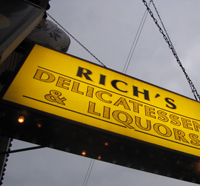 Located in the Ukrainian Village, Rich’s Deli is one of the more easily accessible Polish grocers for the average SAIC student; you can take the 66 practically to their doorstep. When I dropped by on a late March afternoon, women stood across from the deli’s colorful (if tattered) storefront, chatting in Ukrainian as their kids rode bikes.

Down the street, an elderly man stumbled after a Burger King employee in the parking lot, straining to explain that it was nice out (“Jest ciepło! Jest ciepło,” he pleaded — It’s warm, it’s warm!) until he was red in the face. It was that strange, familiar contradiction of local and global, big business and small business, that confronts you on most city street corners.

Inside, the squat, cramped store is dimly lit with depressing fluorescents. A small stand of mealy fruits and vegetables is the first thing you see. But no one really comes here for produce, and the good stuff makes its appearance soon enough. Keep walking and you’ll find a raucous assemblage of all the chocolates, sausage and cheese that your stomach can handle. There are shelves and shelves of the crinkly, shiny plastic packets that are synonymous with goodness (E. Wedel and Milka chocolates, Katarzynki gingerbreads), while the nearby vitrines protect knotty, knarled sausages and slabs of ham marbled with fat. Other must-have items for any Polish meal (including fresh pierogis, soups, and lard) are in an adjacent room.

When I visited, the store was tense and bustling with middle-aged folks picking up last minute items for dinner on their way home from work. They chatted with each other in Polish and poked at loaves of rye bread, testing for freshness, as a lone hipster wandered in their midst. He unsuccessfully tried to ask for something in English, making the clerk’s eyes go round in consternation.

I asked 29-year-old Bozewa Nagadowska, who works behind the deli counter, if Rich’s is always this busy. “It’s actually not too busy right now,” she answered. “Because of the economy, we don’t have as many customers. A lot of people are going back to Europe.”

When I asked her if she ever thought about going back, she responded, “No, here I have more freedom, I can make more money, I have my friends here. I just need to learn English … it’s so hard.” Nagadowska has been at Rich’s since she arrived in Chicago about six years ago. She works here two days a week, supplementing her other job cleaning buildings downtown. I wondered if she feels that working at Rich’s helps her keep ties with back home. She looked at me askance when I asked and curtly answered, “No,” then turned to go help some customers.

If Rich’s Deli is relatively accessible, it takes real fortitude to make the journey to Kurowski’s Sausage Shop from downtown; you’re not likely to find any hipsters ironically buying sausage and cheap beer here. The further west you go down Milwaukee, storefronts don’t even bother putting up signs saying, “Mowimy po polsku” (we speak Polish). It’s just taken for granted.

In terms of selection, Kurowski’s definitely trumps Rich’s. The store is bigger and brighter, and you’re rewarded with an entire aisle of sweets immediately upon entering. I was particularly taken by the plastic liquor bottles that were filled with alcohol-soaked chocolates. Further down, you’ll find assorted coffees (like the divine Jacobs, or the amusing Peter the Great’s), teas (my favorite is the spiced wine flavor), and things you need for baking, like huge jars of poppyseeds. Around the corner there are barrels of assorted pickles; herring (feel lucky that they’re already dead — when I was a kid, the fish in those barrels were still alive when you bought them); and baskets of raw nuts. And then, of course, there are the sausages.

“Sausages are definitely our most popular item — and bread,” 19-year-old Kathy told me. “That’s what we’re known for.” She’s a petite blonde who started working at Kurowski’s about three years ago, and is the only staff member comfortable in English. 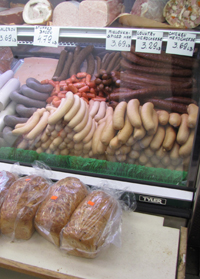 During my visit, the store was populated only by middle-aged men, many with shaved heads and wearing hoodies, leaning against the wall to read newspapers and talking to each other in the often indecipherable “Chicagowski,” an Anglicized form of Polish. I asked Kathy if this was a pretty much Polish-customers only place. “No, we have all kinds of people coming in here,” she answered. “The community is changing. We have black, Mexican, Asian people coming. They come for the meats. And because the prices are low.”

You wouldn’t guess that by looking around the store, but statistically speaking, she’s right; the community is changing. Polish stores in the area have started to close, due both to the poor economy and the fact that Poles are leaving Chicago: they’re either returning to Poland, or moving out to the Western suburbs. For most of the 20th century, Chicago had the largest Polish population in the world, second only to Poland’s capital, Warsaw.

This is no longer the case. Thanks to the EU’s opening up of national borders, London has become the new capital for Polish expats. And according to the latest Census, the Germans and Irish have recently edged Poles out as Chicago’s largest European ethnic groups.

I can see these changes for myself. Some of the Milwaukee Avenue stores my family frequented when we came to Chicago in the early ’90s aren’t there anymore. The flower shop where we bought willow branches every Easter is gone, and so is the small corner store where we would buy cream-filled pastries and that Polish anomaly that is the cheese-less cheese puff. Visiting Milwaukee Avenue today is bittersweet in that regard.

But fortunately, even in these times of crisis, we can find comfort in the fact that the communal need for European chocolate and herb-flavored vodka will always stay the same. 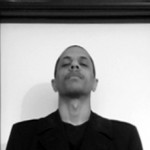 One Response to Beers, Barszcz, and Babcias