This Thursday evening, the radical New York City-based film/video collective Red Channels will present screenings and lead a discussion in the 1307 Flaxman Theater at SAIC.

In August 1969, the Weathermen, a radical faction of the Students for a Democratic Society, called for a 3-day event in Chicago to come out against the use of electoral politics to stop the Vietnam War. This event, now known as the Days of Rage, is documented in three videos by New York City video collective Videofreex.

On March 24, SAIC’s ExTV and Video Data Bank will host Red Channels in presenting these three videos made by Videofreex: Chicago Travelogue: The Weathermen (1969), Fred Hampton: Black Panthers in Chicago (1969), and Chicago Travelogue: Abbie Hoffman, Jerry Rubin and the Yippies (1969).

Following the screening, members of Red Channels will be available to discuss the videos and the state of current radical political protest in America. –Jennifer Swann 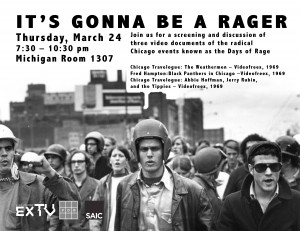 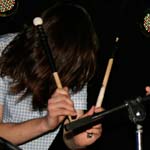