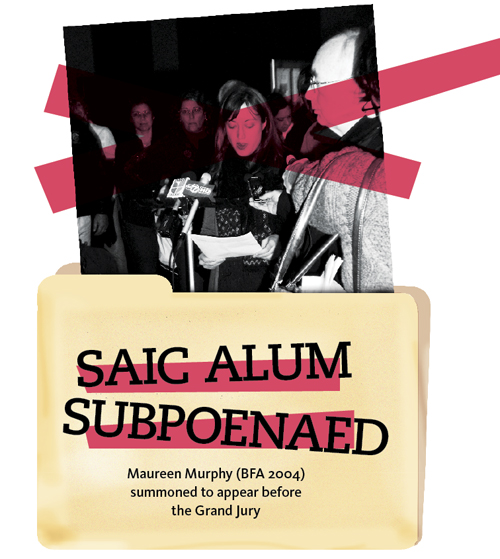 Talking on the phone with Maureen Murphy (SAIC alumna, former F Newsmagazine editor, and now the managing editor of the Electronic Infitada), one would be loath to suspect that the political activist’s calm, articulate demeanor is that of a woman who was recently been subpoenaed by the FBI to appear before a federal grand jury on January 25, 2011.

A long-time activist, Murphy is only able to speculate as to why she is under investigation by the FBI. “I’m one of several other organizers with the Palestine Solidarity Group who’ve been subpoenaed, and it seems that we are being investigated because of solidarity delegations to the occupied West Bank that we’ve done,” Murphy says. The purpose of these delegations is to send activists from the United States to Palestine, in order to educate them on the grave conditions of the human rights situation there. “We believe that ending U.S. aid to Israel, since our tax money basically subsidizes the occupation, is the key to ending the deadly status quo in the Middle East.”

Murphy has been involved with activist work for Palestine since her undergraduate days at SAIC, when she participated in student activism on campus — passionate work that many of her fellow classmates and teachers remember fondly. “She was a bright, hardworking, very engaged student. Maureen is a very sweet and kind person, highly principled and someone of great integrity. She is a brave and inspiring person to know,” says Timothy O’Donnell, a liberal arts professor at SAIC.

After graduating from SAIC in 2004, Murphy moved to the West Bank city of Ramallah. During her year and a half stay, she worked for the Palestinian human rights group Al-Haq. This non-governmental organization was established in 1979 to promote human rights in the Occupied Palestinian Territories. She was deported back to the U.S. by Israel in 2006.

“The time I came back was when Israel launched its war on Lebanon. Meanwhile, it was shelling Gaza, and whole families were being massacred, so that really jolted me into action, and that’s when I became involved with the Palestine Solidarity Group,”

says Murphy. Back in the States, she also assumed her current position as the managing editor of the Electronic Intifada, an online publication which is “the leading Palestinian portal for information about the Israeli-Palestinian conflict and its depiction in the media,” according to its web site.

Organizations like the Palestine Solidarity Group and the Electronic Intifada have come under greater scutiny in the aftermath of recent government decisions expanding definitions of material support to foreign terrorists. “I think that they [the U.S. government] are trying to criminalize the Palestine solidarity and support movement,” Murphy said.

But it’s not only Americans in Palestine that the U.S. government is worried about. “I put this into the context of decades of U.S. government repression of the Palestinian community in the U.S., [including when the] U.S. government deported Palestinian activists who immigrated here after Israel occupied the West Bank in 1967,” says Murphy.

“When Palestinians came here, they started organizing, and started educating Americans about what was happening in the Middle East and their government’s role in it. There were a lot of folks who were deported.”

Although this “fishing expedition” has attracted notable attention, it is only the most recent in a series of similar events. “This repression was really ramped up after the September 11, 2001 attacks, and in December of 2001, the Bush government shut down the largest Muslim charity in the U.S., which was called the Holy Land Foundation,” Murphy explains.

The Holy Land Foundation (HLF) was the largest Islamic charity in the United States, and had charges brought against it by the federal government in 2007 for funding Hamas and other suspected Islamic terrorist organizations. Some of the HLF’s primary activists were put on trial, receiving sentences as long as 15 to 65 years.

If made to testify, Murphy and the other subpoenaed activists will not be questioned under the typical “bring your lawyer, speak to a jury of your peers” format. Rather, when being forced to testify in front of a grand jury, one is required to show up without a lawyer, and is subject to questioning in front of a jury hand-picked by the United States government.

“If you don’t answer any questions in the way they want, you can potentially be charged with obstruction of justice,” says Murphy. “So it’s basically been used throughout the history of this country to intern political activists, because if you refuse to testify in front of a grand jury, then you risk being jailed. And if you do testify before the grand jury you’re basically coerced into giving information to the U.S. government about how you organize, who you know, and how the other people you know organize.” This inquisition would most likely pit Murphy against her fellow activists. “So that’s why we call it a fishing expedition, and that’s why people have been refusing to participate in it.”

The possible repercussions are very high for these activists, as the U.S. government recently broadened what constitutes criminal activity in political activism.
On June 21, 2010, the government made a ruling on Holder v. Humanitarian Law Project, which deemed that it is a federal crime to “knowingly provide material support or resources to foreign terrorist organizations. The term ‘material support or resources’ means any property, tangible or intangible, or service, including currency or monetary instruments or financial securities, financial services, lodging, training, expert advice or assistance, safehouses, false documentation or identification, communications equipment, facilities, weapons, lethal substances, explosives, personnel (one or more individuals who may be or include oneself), and transportation, except medicine or religious materials,” according to the U.S. Supreme Court.

Peter Erlinder is a William Mitchell law professor who was arrested this summer in Rwanda for representing Victoire Ingabire, and who also spoke out after the September subpoenas were issued. He says that in issues of providing material support, it doesn’t matter what the activists’ intentions were. “The individual doesn’t have to intend to be furthering illegal activities,” Erlinder explained during a press conference after the Minnesota raids.

The subpoenaed activists are also frustrated with the grand jury system, and the lengths to which the government has gone to criminalize these political dissidents. Tracy Molm, a union organizer for the American Federation of State, County, and Municipal Employees Local 3800 in Minnesota, received her subpoena on September 24.

“Sadly, it’s becoming more common for the FBI and government agencies to spy on anti-war and activist groups, as the inspector general publicly acknowledged the Monday before our homes were raided and the first 14 subpoenas were issued,” Molm says. “And it’s also true that there is a history in this country of FBI and police infiltration and harassment of people’s movements that are fighting for justice against the government. We are fighting for justice for Palestine and its people, but the U.S. government continues to fund the government of Israel which uses this money to oppress and occupy Palestine.”

Despite this federal investigation into the work that Murphy and the other activists have been so passionate about for so long, the group wasted no time in organizing after the September 24 raids. In addition to creating a National Day of Action, which occurred country-wide on January 25 — the same day that the Chicago activists were required to show up for trial at the Dirksen Federal Building — the activists have witnessed unwavering support from groups and individuals all over the country, especially here in Chicago.

“The Chicago Teachers Union, which has 30,000 members, has issued a resolution condemning the raids and calling for an end to this investigation,” Murphy says. And that’s not all. “So far, unions representing more than half a million workers in this country have issued resolutions of solidarity with all of us facing the grand jury. … People believe that this could have happened to any of us and that all of us have something at stake here. People see this as an attack on our fundamental right to organize, and dissent, and peacefully work to change U.S. policy.”

Although groups and unions across the country are rallying in support of the activists, Murphy’s support system is deeply rooted in those she’s touched personally throughout her life.

“She is one of the few people I know who is genuinely committed to justice and to fighting injustice no matter where the injustice occurs. She focuses on the plight of the Palestinians and on their rights, an issue that is very sensitive in the United States where pro-Israeli sentiment is very powerful. We all stand with and support her in these difficult times,” says Raja Halwani, SAIC faculty member and the author of a book on the philosophical analysis of the Israeli-Palestinian conflict, “Israel, Palestine, One-State Solution: Philosophical Essays on Self-Determination, Terrorism and the One-State Solution.”

So what’s next? Jail, or the continued right to peaceful activism? “We think that our best defense is a strong and broad support movement, and we hope that no one actually gets put in jail,” Murphy says. But with the potential for incarceration looming overhead, Murphy and the other activists are focusing on what they do best: garnering support.

“I’ll just emphasize that we think that maybe one of the reasons, the motivations behind this invasive investigation is that the U.S. government wants to intimidate people from organizing, and that it might have a chilling effect on our movement,” Murphy explains.

But has that really been the case? “So far we’ve seen the opposite effect. And what’s most important for people to do right now is to stand up and raise their voices, because if we lose our rights it’s really hard to get them back. The more of us there are out on the streets, protesting when we feel like we need to protest, the harder it is for people to get singled out and to be politically persecuted in this way.” 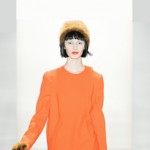