She Said/He Said: Two Critics on Richard Hawkins at the Art Institute

Does the exhibition present a humorous, conceptually clever thesis on sexual desire and obsession? Or is it sloppy work that falls flat? 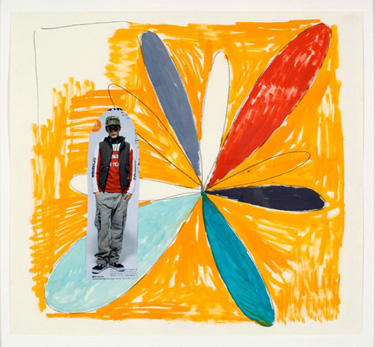 Thumbs Up, by Ziyuan Wang

L.A.-based artist Richard Hawkins will be pleased to see his first museum survey at the Art Institute of Chicago, which refuses a simplified classification of his work. Arranged by thematic relevance rather than chronological sequence, the exhibition well reflects the complex eclecticism of Hawkins’ oeuvre, which varies dramatically in medium, subject, form and palette. As one strolls along the hall, his work sends the viewer on a voyage to different locales: from studying the elegant posterior of marble statues in Ancient Rome, to appreciating the celebration of sensuality of classical French art. At one moment the viewer finds herself peeking into the sex tourism in Thai culture; the next moment, she’s investigating a dollhouse inhabited by cut-outs of Japanese male fashion models.

Richard Hawkins’s reputation in the art world is based on his diverse practice in a variety of mediums and subject matters, usually drawing on the lesser known facets of history. Despite this stylistic diversity, a consistency of subject matter can be found in his work after 1990, which invariably depicts beautiful male figures as objects of desire, transforming the viewer’s innocuous act of looking into a kind of voyeuristic guilt. In this perplexing hodgepodge of painting, collage and sculpture, the AIC exhibition stresses Hawkins’ dedication to the reconstruction of mass produced images, which, in his own words, allows for “difference within culture and fantasies beyond culture.”

Hawkins’s work explores queer themes, but not in an oppressive way. Humor is imbedded in his oeuvre, as seen in the series A Treatise on Posteriority. The artist’s unerring eye and uncanny observation of gender ambiguities serve him well in exposing the censored sexuality of ancient times. Through a juxtaposition of frontal and back views of classic sculptures alongside sassy handwritten comments, Hawkins plays with the cultural canon and social taboos regarding the front and the rear, with their potential connotations of propriety or obscenity.

Similarly, in Urbis Paganus, a series of collages on mat boards, the viewer is confronted with a historical celebration of a hermaphroditic mother and her two effeminate sons. Through his meticulous choice of words in description — precise tidbits of nipples, a bashfully winking navel and the graceful descent of Apollo’s belt, to name a few — Hawkins animates the lifeless statue on the pedestal with a strong shot of satire.

A large part of the exhibition is devoted to young, beautiful and sometimes exotic men as an object of desire and voyeurism. Hawkins uses cutout magazine pages in every possible way: collaged, superimposed on painted surface, paper-clipped to the canvas, dabbed with oil paints, pasted to the interiors of dollhouses, and so forth. When walking around his haunted labyrinth — a dilapidated wood structure transformed from a readymade dollhouses — one has to bend down to peer into the pigeonhole-sized, half-curtained windows to examine the dimly-lit interiors. Likewise, one has to shift back and forth to recognize the scribbles on the walls, which read like a regretful confession, inspiring a guilty sense of voyeurism on the part of the viewer, while also rewarding her with the pleasure of excavating a secret.

In another low-lying maze — House of the Mad Professor — there is a striking contrast to the exquisite miniature furniture and blatantly vulgar wallpapers rendering nudity. Hawkins casts our gaze back onto ourselves by turning a public space into a sexualized private cabinet. Seduced by beauty and secrecy, the viewers are made aware of their own desires and the irresistible lure of voyeurism.

In his exploration of obsession and sexual desire, Hawkins doesn’t just linger on the surface of the commodification and consumption of beauty. Rather, he delves into the history of body in art and culture, with a scrutiny of classics and pop culture, history and literature, and Hollywood and Thailand. With the intellectual depth of a scholar and an obsession with poster boys, his work is a combination of high and low art, a revelation on the nature of looking.
________________________________________
Thumbs Down, by Eric Baskauskas
Richard Hawkins’s “Third Mind” at the Art Institute presents a mid-career survey of this living artist, with mixed results. Here we have an artist with unquestionable dedication to his craft, but there’s a lot of wall space to fill — and it seems that some of the exhibted pieces have been put on display out of necessity as much as any sort of conceptual engagement. Hawkins’s working processes are more or less what’s truly on display here, as opposed to specific master works.

Indeed, one could argue that the entirety of Richard Hawkins’s “Third Mind” is a mere collection of studies and sketches. Art supplies on tables, scotch tape on magazines, paperclips and thumbtacks don’t really suggest that this work was made with aspirations towards display at the Art Institute of Chicago. Despite this, the show does feel very “contemporary,” with its pervasive irreverence and sly wit.

The show focuses on Hawkins’s collage work as an essential and distinct facet of his practice. It opens with an underwhelming room consisting mainly of work from the last decade. The first few pieces on the wall (starting with Untitled, 2000) are unassuming: magazine clippings and paint splatters that are framed and hung on the wall at a very important cultural institution. The (very nice) printed gallery guide confesses that these are incidental works, but attempts to legitimize their presence as “objects in their own right.” However, it’s easy to dismiss this work and question its validity within the venue.

The only truly engaging work in the first room, Urbis paganus IV.9.1 (Posteriority title) (2009), stares this question in the ass. Looking at ancient Greek and Roman figurative sculpture, Hawkins’s hand-written musings accompany photographs of the backsides of statuary Gods. Recalling the compositional strategies of fellow Angeleno Raymond Pettibon, these read like studies in their conversational tone, both verbally and visually. Unlike the other work, these pieces offer a direct entry point to the way Hawkins’s mind operates. This glimpse into a thought process is essential for the enjoyment of a show that relies so heavily on the very specific interests and obsessions of a single personality.

A most confounding example of this specificity comes in the repetitive use of Asian male fashion models. I understand that we all make art about what we’re interested in, so you can’t fault the guy, but it can feel like some of this work’s presence is a matter of volume, not value. This is the essential tension of his work being shown at the Art Institute. Not only is it all quite sloppy, but it’s all so specific and personal … Is this the work of a genius or simply a lucky mad fetishist? Probably somewhere in between: it’s the work of a career artist. All art is fetish, all is subjective, the exhibition seems to say.

This tendency toward the specific and sloppy continues in the second room with the disembodied zombie series (1997), large-format inkjet print depictions of well-known figures which look as hastily produced as the cutout collages. Slick from a distance, they reveal themselves to be pixelated, poorly assembled digital images upon closer examination. And once again, the concepts between the work seem somewhat weak. Ben Arnold, George Clements, and Skeet Ulrich are presented as headless zombies, and conceptually are presented as disembodied metonymies, made grotesque by being taken out of context.  The same technique comes in this room as various American heavy metal and pop stars are clipped from magazines and removed the context of their bands and musical contexts. We’re confronted with more obsession, and more marginal cultural significance.

The show’s final room is where things really get crazy. Bizarre dollhouses mark the first true, palpable display of the artist’s technical skill. Dilapidarian Tower (2010), The Last House (2010), and House of the Mad Professor (2008) all show off a craft-driven intensity unseen in the rest of the show. The craftsmanship is precise down to a most skilled hobbyist’s degree. But what’s interesting here is that the houses, for all their technical complexities, are the least engaging of all the works. Somehow, although they make the most sense in the context of the museum show, the elaborate constructions fall flat. I spent the whole show wondering if Hawkins was really trying; and when I finally found that, at least sometimes,  he definitely was, I was disappointed. In the houses, gone are questions of “is this art?” and “why is this here?” which, it turns out, were the most exciting part of the entire show. 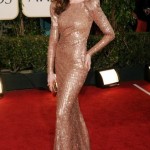