Theatrical lighting, ribbons, and an audio track that alternates between bird cries and silence have transformed the LG Space of Student Union Galleries into a place where perception, myth, nature, and science collide. 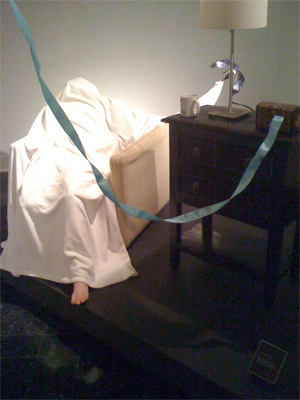 Theatrical lighting, ribbons, and an audio track that alternates between bird cries and silence have transformed the LG Space of Student Union Galleries into a place where perception, myth, nature, and science collide. The show, titled “If one looks down at the earth from the moon, there is no virtual distance between the Louvre and the Zoo,” is the work of Joseph G. Cruz (BFA 2011).

Cruz’s primary focus is the production and reception of information, a concern that manifests in his sculptural pieces, such as the eerie “EVERAFTER.” The work consists of a taxidermy bird suspended in midair laying a white blanket over a dead body in an armchair, which has only a few bare toes peeking out from the makeshift shroud. An “I love my Grandpa” mug and a box spewing forth ribbon carried heavenward by another bird rests on the table next to the prone figure. This Disney-like vision of cheery, helpful animals is made all the more unsettling by the death the birds seek to conceal and their own lifeless, frozen forms.

Cruz offers a snapshot, a glance into a story suspended in time, and we yearn to know more. Yet all the while Cruz makes us aware of the constructed nature of that moment: the scene is placed upon a stage, the wires holding the birds in place are apparent, and we know – beyond an initial, startling look – that there is not a real body under the sheet. Careful consideration of lighting and placement give “EVERAFTER” an otherworldly aura; the gallery walls behind the sculpture are blank, allowing for artful shadows. 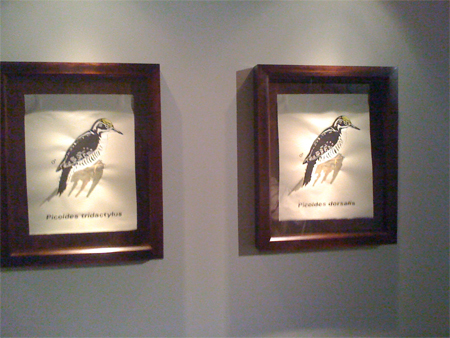 Other works spark conversation about the nature of display and scientific inquiry. The titles of Cruz’s pieces can be descriptions of the work itself, such as “A taxonomic split often occurs when scientists discover – through the prosthetics of DNA testing or computer analysis of song – that what appeared to be a singular species, is actually two separate species that look identical.” The piece features framed and spotlighted scientific illustrations of birds, identical but for the scientific names printed below. Though our eyes perceive one creature, we put our faith in science, and one creature becomes two. Cruz raises questions about the way we order and make sense of our world, and offers these configurations as possible answers.

“If one looks down at the earth from the moon…” will be on display until December 15. Check out Allison Glenn’s review of Cruz’s recent show in L.A. here. 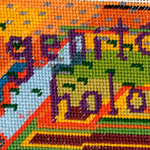 One Response to Joseph G. Cruz at SUGs