A Bit of This and a Little of That: Steve Reinke at Gallery 400

With charming wit and a dash of vulgarity, the Canadian-born artist presents viewers with a diverse body of recent work, including drawing, needlework, found imagery and video. 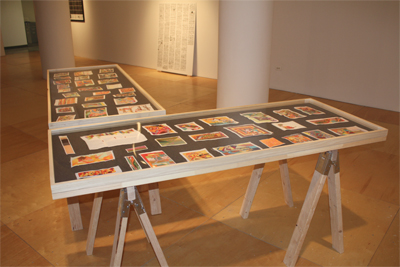 With charming wit and a dash of vulgarity, Steve Reinke’s show, The Tiny Ventriloquist, at UIC’s Gallery 400 seems to have something for everyone. The Canadian-born artist presents viewers with a diverse body of recent work, including drawing, needlework, found imagery and video. The back room of Gallery 400 also includes pieces by Reinke’s collaborators, John Marriott, Jessie Mott, James Richards and Dani Leventhal. The show is titled after Reinke’s largest work in the exhibit: an hour-long video compiled of original and appropriated video clips commissioned by Gallery 400.

Reinke, now based in Chicago, blends pastiche and sarcasm to create a body of work that is as fun to view as it probably was to make. In the center of the first room in the gallery, large display tables house a number of Reinke’s needlework. Completed during 2009 and 2010, the sundry page-sized tapestries at first appear to be explorations of form and color. Though they predominantly consist of either sinuous lines or larger geometric forms, a few of these pieces are adorned with symbols and words spelling out obscure phrases such as “rusty machete, festive confetti.”

An adjacent wall features 36 of Reinke’s ink drawings. Like his needlework, these works are telling of the artist’s playful approach to language and form. Reinke combines abstract and figurative elements in his drawings while, as in his needlework, occasionally introducing textual elements that appear to either experiment with meaning and syntax or allude to some form of abstract narrative. Here, a page bearing the word “aminal” (a childlike mispronunciation of “animal”) lies near another page with the words “genital holocaust” scrawled across it in sloppy cursive. Underpinning his minimal drawings is an attitude of humor and childishness juxtaposed with a sentiment of mortality and anxiety witnessed by his conflation of play and provocation.

Threading this sentiment into other works in the gallery, Reinke explores the trite aspects of our human experience. “Sign,” a piece made this year, displays the words “everybody likes a bit of neon” in white, neon light. Though the piece is the only one of its kind in the gallery in terms of material, it nevertheless feels a fitting addition to the exhibit in its overt banality. The bright, nearly clinical affect the piece evokes is attuned to a similar sort of anxiety imbued in his drawings and needlework. 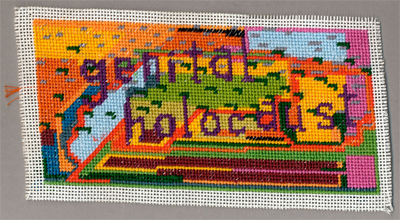 The artist’s video work adheres to the same convoluted rhetoric in “The Tiny Ventriloquist” and his other video collaborations with John Marriott and Jessie Mott. Mott and Reinke provide animation to Mott’s watercolor paintings of animals behind a soundtrack of sampled music and amusing voiceovers. In “Blood and Cinnamon,” Mott’s creatures discuss existential crises as they flip and rotate and disappear from view. Akin to some sort of psychedelic children’s program, Reinke’s videos circumvent meaning and narrative as they play with language and form in a way that corresponds nicely with the artist’s drawings. His videos boast a surprising intellect in their amalgamation of imagery, prose and nonsense.

As disparate as Reinke’s process and use of materials may seem, the body of work as a whole is cohesive. His drawings inform his needlework and his needlework informs his videos. The exhibition expresses a level of cynicism, transience and sexuality that exceeds the materials the artist uses. With small bursts of impropriety and irony, Reinke paints a telling picture of life’s antinomies. Subtle in its approach, Steve Reinke’s exhibit at Gallery 400 investigates a world where death is as much a reality as the punch line of a joke.

Arts & Culture, Uncategorized A Bit of This and a Little of That: Steve Reinke at Gallery 400
« Previous Story 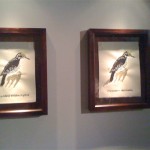