“ I always had gallery hours so people could visit, but as soon as the hours were over, I would kind of take the art down and start cooking again…” —Bill Gross

The city’s crackdown on apartment galleries last May has caused independent Chicago gallerists to rethink the role of alternative art spaces, and create a dialogue about experiencing art outside the confines of traditional, commercial venues. 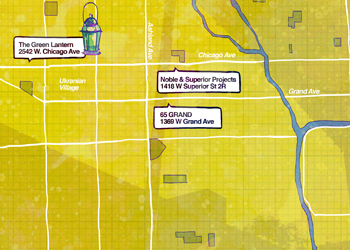 Within walking distance of each other in Ukrainian Village and West Town, 65 Grand, Green Lantern, and Noble and Superior Projects are three galleries that have explored the politics of showing work in alternative spaces while attempting to navigate the idiosyncrasies of city regulations.

Bill Gross started 65 Grand out of his apartment in 2005 as an unplanned party for a few of his artist friends. He didn’t have any problems with the city until his humble space started attracting the attention of art collectors and national publications like Artforum. All of this publicity also caught the attention of Chicago’s commercial gallerists, however, who felt that apartment-run galleries had an unfair advantage.

“[65 Grand] got shut down because I think the commercial gallerists are afraid that their money is being taken away by the alternative spaces,” speculated Patrick Boblin, co-director of Noble and Superior Projects.

Thomas Robertello is one of those gallerists. In an article by Mike Hines published in 2009, Robertello was quoted as saying, “My problem is with the aggressive attempts many of them make to market themselves as public exhibition spaces instead of private, while a lot of us are spending a lot of money to be legal and responsible. … Personally, I wonder long-term how positive apartment galleries are and if they might contribute to putting galleries out of business.”

Although Bill Gross paid taxes on the artwork he occasionally sold at 65 Grand, he didn’t think he could apply for a business license because he wasn’t operating the gallery from a commercial space. When an anonymous complaint was lodged about the gallery this past May, city officials showed up at the door of Gross’ third floor Ukrainian Village apartment, which he shares with his girlfriend. 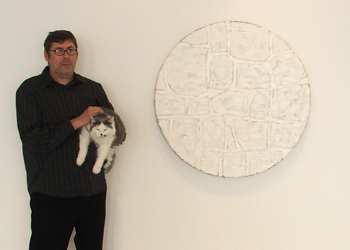 “They asked, ‘Do you take a fee for anything?’ And I don’t,” Gross recalled. “If an artist did a show, and someone wanted to buy [one of the works], I would sell it and take some percentage of that.” To keep things legal, city officials encouraged Gross to apply for a business license because his building was commercial, but the license was ultimately turned down because his particular unit wasn’t.

“At that point I’d already been in that space for almost five years, so I was really anticipating moving anyway,” Gross said. “I always had gallery hours so people could visit, but as soon as the hours were over, I would kind of take the art down and start cooking again. … To open the gallery it was this colossal hassle to get my house cleaned again.”

65 Grand’s new location at 1369 W. Grand Avenue, just down the street from his old apartment, doesn’t require Gross to cook, clean, and sleep in the same space in which he hangs art. In fact, the new white cube-like space is visible from street level, and Gross no longer has to trek up and down three flights of stairs to unlock the door for guests, carry large works, and haul several cases of beer. 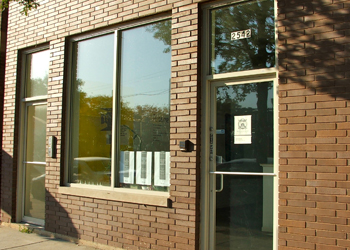 Although 65 Grand’s move caused many artists and gallery-goers to speculate that the city was really cracking down on apartment-run galleries, Gross never got the impression that shutting down galleries was ever on the city’s agenda.

“I sort of thought that somebody in the city has a job to do, and the gallery in the home is just something that is so unusual. … I think the city just wasn’t sure what was going on. The city didn’t fine me. I think as much as possible they were trying to figure out a way to keep it going in that space.” Gross has finally embraced the commercial business model for his gallery, while retaining his creative vision and his presence in the neighborhood.

In June of 2009, Caroline Picard, the Executive Director of Green Lantern, was also forced to move her gallery out of her apartment. A city official saw a sandwich board outside the gallery and told her that she couldn’t obtain a business license for her residential unit on Milwaukee Avenue in Wicker Park. 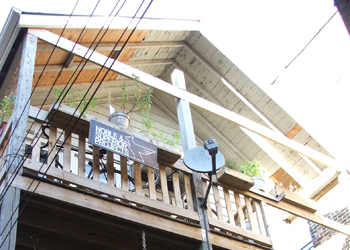 “I was going to wait another year until I finished school before I started really thinking about what was going to happen to [Green Lantern],” said Picard, who received her MFA from SAIC last spring. Although Picard admits that moving the gallery out of her home was upsetting at first, it also forced her to ask a lot of questions about why she was running the gallery and why she felt it was important.

“Then I sort of figured that I would try and explore it in a different way. I became really interested in trying to figure out ways to create sustainable situations for contemporary art. … And so it seemed interesting to play with these kinds of business structures, with a creative attitude. … Moving out of my apartment brings up different questions to think about,” said Picard, who currently runs Green Lantern out of a temporary commercial space at 2542 W. Chicago Avenue. 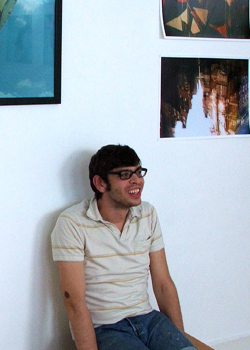 Patrick Boblin, co-director of Noble and Superior Projects, in front of photographs hung upside down for the exhibition “Ron Artist: MVP”

While Green Lantern hosts exhibitions, film screenings, performances, and readings, Picard and her collaborators are still searching for their ideal space, which would include a for-profit café/bar, performance space, and bookstore. Picard recognizes that this may be overly ambitious, especially considering how tough it’s been to find any space that would work. 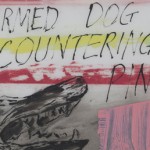 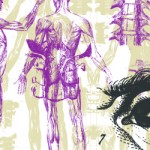