“Images of piled dead bodies taken during the Holocaust haven’t stopped other holocausts from happening. It is not clear if art has the power to do it.” — Rod Slemmons, curator

“La Frontera” at the Museum of Contemporary Photography

The line that divides Mexico and the United States has come to represent an increasingly violent clash between different social and political realities.

“La Frontera: The Cultural Impact of Mexican Migration” is a photographic exhibition that attempts to portray this line from as many angles as possible. The photographs are also meant to encourage viewers to stop seeing migration as a problem, according to Rod Slemmons, Director of the Museum of Contemporary Photography and curator of the exhibition.  “The hope is that specific, personalized photographic projects might be an antidote to the harmful abstractions and oversimplifications in the media,” he said.

The exhibition, on view until December 22, shows around 150 images by ten photographers, including journalists and contemporary artists from both sides of the border. The represented photographers have worked close to the border for several years to help untangle a knotted story of cultural difference, violence, drugs, risk, racism, and the search of millions of people for better opportunities.

“My project is about the long- term causes and consequences of the drug war in Mexico, and I’m trying to move beyond the story as just one that has to do with violence. For me, violence in Mexico is only one of a variety of symptoms that Mexico is dealing with and will be dealing for a long period of time,” said exhibiting photographer David Rochkind.

The theme of the drug war is also present in the poem “Ode to Juarez No. 4,” which is included in the exhibition. “We all have another beautiful lie that will help us forget that Juarez is alive and well — and living in El Paso,” poet Ben Saenz says. Saenz lives in Juarez, a Mexican city that has slowly lost its everyday life to the crossfire between drug cartels.

Michael Hyatt, a U.S. photographer, concentrates on the physical evidence of undocumented workers and illegal migrants along the Sonora Desert border area of Arizona. He has worked on both sides of the line, shooting objects that suggest stories of suffering, violence, death, and families coming apart.

When picturing these harsh realities, one of the major challenges for socially conscious photography is to convey empathy — something found in many of the pieces presented in this exhibition. Both the Mexican and American photographers made a notable effort to create a balanced portrait of migration.

“I think it is just a recognition of a common humanity … We all have the same dreams and fears, and one of the things I try to do with my pictures is to create a sense of empathy, as opposed to a sense of sympathy. I want people to understand this connection, and not just to feel sorry about the people in the picture,” said David Rochkind.

An interesting surprise awaits the viewer at the end of this exhibition on the third and last floor of the museum, which houses Mexican artist Yoshua Okon’s installation. Okon’s project uses irony and humor to satirize the phenomenon of the “maquiladoras,” or factories near the Mexican border that take advantage of cheap labor (typically favoring nimble-fingered female laborers). These factories are infamous for their abuse and exploitation of Mexican laborers.

The artist’s clever and creative piece invites viewers to imagine a factory that produces “Canned Laughter,” in alternately evil, ironic, manly, sexy, or hysterical versions. Laughter is produced by uniformed people lined up in a choir and led by a music director, upon which the laughter is canned in a literally magical and sparkling presentation.

The overall exhibition was carefully and smartly curated (with the exception of some glaring Spanish mistakes in some of the pictures’ captions).  The exhibited works tell the story of “La Frontera” in a fair and thoughtful way, portraying its fiercely upheld, if often violated, mandate of division, as well as the stories of thousands of men and women risking their lives in the pursuit of a better life. Of course, the photographs also remind us that the borderline is only a halfway mark; most of the story actually happens before and after it is crossed.

The continued reports of violence in this area make the work feel particularly urgent. The economic downturn in both Mexico and the U.S. has reduced the number of attempted illegal entries simply because there are fewer jobs north of the border, but Latin American media reports show that the number of deaths around the border has not declined.

Slemmons, curator of the show, explains that the exhibition can’t attempt to change realities, but can offer information regarding the reality of what’s happening. “Images of piled dead bodies taken during the Holocaust haven’t stopped other holocausts from happening,” he said. “It is not clear if art has the power to do it. … Can they [artists] stop it? Or do they just illustrate it?” 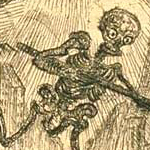 One Response to Border Zones