“The ‘new’ windows are beautiful, celebratory — very experiential and atmospheric — all qualities that visitors will appreciate when they see the new presentation.”

Good news for those of you who have been missing those beautiful, blue-stained glass windows that used to overlook McKinlock Court at the Art Institute of Chicago. After a five-year absence, Marc Chagall’s iconic “America Windows” will return to public view in the museum’s Arthur Rubloff building beginning November 1.

“We’ve heard from thousands of visitors since the Chagall Windows were de-installed five years ago,” said Stephanie D’Alessandro, the Art Institute’s Gary C. and Frances Comer Curator of Modern Art. “People have expressed admiration for such an iconic piece of artwork here in our collection, and they have missed seeing the windows in the museum.” The windows were taken down in May 2005 to prevent any damage to them during the construction of the Modern Wing.

Chagall’s “America Windows,” otherwise simply known at the “Chagall Windows,” have been a Chicago icon since their dedication on May 15, 1977. The “America Windows” later gained wide recognition with the release of the John Hughes film “Ferris Bueller’s Day Off” in 1986. In the film, title character Ferris Bueller (played by Matthew Broderick) skips school and goes on an adventure, visiting the Art Institute of Chicago along the way. He kisses his girlfriend in front of the “America Windows” in what has become an iconic scene.

In the early 1970s, Chagall gifted the “Four Seasons” glass mosaic, located in Chase Tower Plaza, to Chicago. It was at the unveiling ceremony for the “Four Seasons” that Chagall learned the Art Institute was planning a gallery in his honor. He offered to create stained-glass windows for the gallery.

It was later announced that the theme of the windows would be the American Bicentennial. Chagall’s ethereal designs include references to Chicago and celebrate artistic and religious freedom. When Chagall learned of the death of Mayor Richard J. Daley in 1976, he decided to dedicate the “America Windows” to the late mayor’s memory.

Chagall created the windows with the assistance of stained-glass artist Charles Marq. The windows are made up of three parts, each with 12 panels, and when installed reach nearly eight feet in height and over 30 feet in length. Marq and Chagall used a combination of medieval and modern techniques in fabricating the 36 glass panels. Chagall painted his designs directly on the panels using metallic grisaille paint, which fuses with glass when heated.

The temporary removal of the windows has proven beneficial to conservators and researchers at the Art Institute, who have spent the past five years restoring Chagall’s work. It was critical to learn the exact methods Chagall and Marq used in creating the windows in order to safely clean the glass. The restoration process allowed new insight into Chagall’s work, and gave conservators the opportunity to remove a dulling film caused by condensation, giving the windows new shine.

The “America Windows” will not be returning to their original location, but will instead be installed in the Arthur Rubloff building (Gallery 144) on the east side of the Art Institute. This choice is deliberate. “We had two priorities for selecting the location,” says D’Alessandro. “We needed to be able to recreate the structural environment that Chagall had originally planned, and it was also important for us to illuminate the windows more fully and consistently. The previous location was entirely daylight dependent.”

Stephanie D’Alessandro is eagerly anticipating the unveiling of the windows. “We expect the public will be thrilled,” she says. “The ‘new’ windows are beautiful, celebratory — very experiential and atmospheric — all qualities that visitors will appreciate when they see the new presentation.” 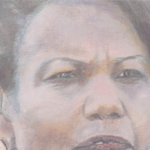 One Response to A Chicago Icon Makes a Comeback