Talk about a loud suit 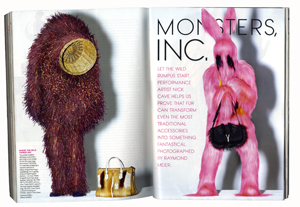 Specialist in all styles Nick Cave does dance, sound, fashion

Amanda Aldinger: I want to start off with the editorial spread in the September issue of Vogue. What was the process of landing that?

Nick Cave: Vogue called my gallery in New York City, Jack Shainman Gallery, and asked if I would be interested in doing a spread … but I had just shipped out all of my work to a museum in Sweden. So I had no work. My gallery called Vogue and said, “He doesn’t have any work, maybe he can do it another time.” The magazine called back and asked if I could produce some work, and I said that in order for that to happen, I’d need at least two months. And so they basically held the spread until I produced the work.

AA: So everything in that editorial you produced specifically for Vogue?

AA: Can you talk about your process for creating your Soundsuits?

NC: The ideas are really generated by paying a great deal of attention as to what provokes me through material. So it’s not that I’m sketching these ideas, it’s really just sort of hanging out at flea markets around the country, around the world, and something will trigger me based on something that I see. It’s really on impulse. I’m at flea markets weekly.

AA: You studied textiles in college, you’ve studied as a dancer, and you’re obviously interested in fashion — did you ever anticipate creating work that would merge these three worlds?

NC: No. I made my first Soundsuit in response to the Rodney King incident [Rodney King’s beating in 1991], but I looked at it as a sculptural object. Once I put it on I realized I could wear it, and that through my movement it could make sound. So it was one sort of revelation after another, all with this one concept.

AA: Does fashion influence your work other than the basic aspect that a Soundsuit is also a garment?

NC: I think aspects of it do. More on a couture level — the theatrical aspects of the design, and creating this huge extraordinary world in which the concept comes from. It’s fashion, but then you also have installation. And then all of that ties together and it becomes a performance of sorts —i t all becomes very organic. If someone did a sculptural piece, and you were to bring a dance company to intersect with that — what is it then? Does it then remain a sculpture, or does it become an object that is integrated with this performance base?

AA: What about your new pop-up shop and drive-by series? Are these your conception?

NC: Yes, the pop-up shop is something that will be in support of this drive-by video series. So I’m looking at that as a whole other genre of work that’s an extension of the sculptures.

AA: Can you explain the concept behind the drive-by?

NC: The concept behind it is creating these alternative art venues that rest within communities and off-beat paths. I’m interested in doing drive-bys that aren’t necessarily connected to an institution with particular boundaries, like a museum. This comes as outreach — you can refresh a neighborhood by bringing additional commerce there, but yet it also moves us around the city. I would love to do this in three or four different locations. 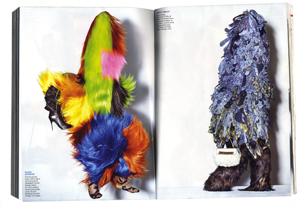 AA: In an interview with Christelle de Castro for Opening Ceremony you mentioned that you consider yourself “a humanitarian before an artist.” How do your Soundsuits reflect that concept?

NC: A Soundsuit dismisses identity, race, gender, and it forces you to reckon with something that’s unfamiliar without judgment. That’s really the impetus that’s behind the work. You can’t categorize them — they’re something that is unknown, unfamiliar, and not necessarily connected to any particular origin. That’s very important — that everyone can bring their own references to the work. It’s a moment where we intersect and the lines blur. The main humanitarian part of it is me taking this and wanting to be an artist with a conscience.

AA: Is this a theme that resonated in work that you did prior to the Soundsuits?

NC: No. Prior to that I was being an artist and working and doing more large-scale painting and installation work. But once I was affected by the Rodney King incident, I realized that I want work that matters.

AA: And that changed your direction a bit?

NC: Yes. I became concerned with how my work would perform out there in the world.

NC: It will be probably be a little bit later now.

AA: Do you have any ideas as to what that’s going to be like?

NC: It’s going to be a 90-Soundsuit performance. I don’t know any more than that. But it’s going to bridge community together, because that’s the sort of interface that we’re working with: dance companies in the city, outreach in the public schools. It’s also going to work with individual performers that are street performers. I’m interested in intersecting and using the community to build the performance.

AA: It’s often said that of the major cultural hubs in the United States — New York, LA and Chicago
— Chicago is kind of the “third city.” Do you see yourself staying here in Chicago and working?

NC: Personally, I don’t think you have to jump ship, period — you have to be smart and realize that. Chicago’s my hub, it allows me to produce my work in an environment that is extremely convenient. I look at Chicago as an open canvas. We’re in a different kind of world today — we’re global. So I can be in Iowa, have an amazing gallery in New York, and still be international. Artists today are multi-tasking. We’re building and designing our own pathways, and making our own decisions about how we’re going to interface with the world at large. It’s up to you how you strategically design that.

AA: Do you have a favorite Soundsuit?

NC: No. I’m not really that connected to my work, on that level.

AA: On what level are you connected?

NC: I think I’m just the messenger here to deliver these deeds.

AA: So once you send them off, you’re okay with that, and you don’t ever need to interact with them again. 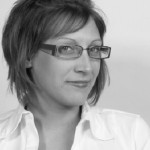 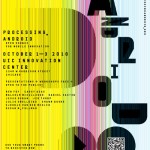 Happening this Weekend in Chicago: Processing.Android: Open Source for...