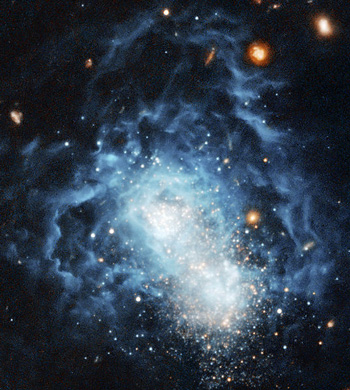 Astronomy enthusiast and SAIC Liberal Arts professor, Kathryn Schaffer, was integral to the School’s hosting of the discussion panel “Cosmic Images: Beyond Beauty,” moderated by Dr. Josh Frieman (Professor of Astronomy and Astrophysics at the University of Chicago). Sponsored by SAIC, the University of Chicago, Adler Planetarium and the Kavli Institute for Cosmological Physics, along with the Great Lakes Cosmology Workshop, the discussion was presented at the School on June 13th.

Held in the SAIC ballroom, panelists Dr. Christy Tremonti (Assistant Professor of Astronomy at the University of Wisconsin Madison), Dr. Michael Gladders (Assistant Professor of Astronomy and Astrophysics at the University of Chicago) and Dr. Thomas Crawford (Senior Research Associate in the Department of Astronomy and Astrophysics at the University of Chicago) spoke about the colors represented in human vision and their relation to the universe. A primary topic of discussion? The fact that science and humanities have been differentiated and compared throughout history, as depicted in physicist and novelist C. P. Snow’s lecture “The Two Cultures” – now part of the lexicon of Visual Studies – and providing endless opportunities for this discussion: should science be taught at art schools?

In speaking with F about the panel’s current relevance, Schaffer said, “Just about anyone is interested in crazy images of space.” Rallying for the importance of an education in science, Schaffer and the other panelists stress the importance of scientists sharing their work, while lauding the fundamental reality of scientific information as a source of aesthetic appreciation.

Alluding to dark matter, dark energy, constellations, supernovas, galaxies, and even fun house mirrors, the panelists explained that cosmic images don’t actually look like what we see, with respect to color. When depicted, color is often chosen by the scientist in order to convey information about the specific occurrence in the image – therefore, it is an aesthetic choice. While presenting his image of a small black dot, Dr. Thomas Crawford explained that it was “a galaxy cluster that had never been identified before,” found using observations of the Cosmic Microwave Background – “a faint afterglow of light from the Big Bang.”

The panel discussion is Schaffer’s metier, as she teaches a cosmology class at SAIC and has produced a great deal of research for science in astrophysics and astronomy. Her publications include: “Galaxy Clusters Discovered with a Sunyaev-Zel’dovich Survey,” Astrophysical Journal; “The South Pole Telescope,” Publications of the Astronomical Society of the Pacific; and “A Search for Matter Enhanced Neutrino Oscillations through Measurements of Day and Night Solar Neutrino Fluxes” at the Sudbury Neutrino Observatory. She is also a member of the South Pole Telescope team, whose “research with the telescope contributes to a better understanding of the development and history of the universe as a whole,” says Schaffer, “focusing especially on the interplay between dark matter and dark energy in the formation of cosmic structure.”

For more information on cosmic energy and the relationship between science and art, visit http://cosmo.uchicago.edu/beyondbeauty/project.html to see the work of Schaffer’s cosmology students and their “Cosmic Images Project.”

The Menagerie by "Death by Design, Co." 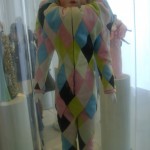